Community journalists under fire on the xeno frontline 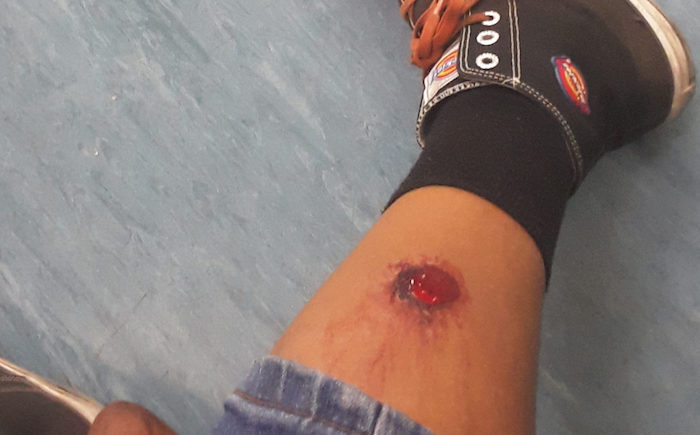 
Community journalists are often the closest reliable witnesses to what’s going on ‘on the ground’, but it’s a dangerous game when the beatings and the looting start – and bullets are flying around.

Cliff Shiko is a thin man with four cellphones and love for Fanta Orange cold drinks. He works as a presenter and current affairs producer for Alex FM, an institution in Alexandra, the cramped informal settlement next to Sandton in Gauteng.

Shiko is an exceptional talent, born and raised in Alex, with the skills to warrant being picked up by the SABC or other broadcasters, yet he remains, as others do, at his community radio station where tens of thousands of people rely on him daily for their local news in Sotho and English.

On Friday last week, he pulled up his bandage and showed me his wound from a cop’s rubber bullet. It was a deep circular hole the size of a R5 coin.

It is the second time he has been shot while covering the news. He limped around Volume’s office in Braamfontein as we prepared to record an episode of his podcast Local Focus and he told me what had happened.

“On Tuesday morning we heard there was looting taking place at Pan African CBD,” he said. This is a shopping centre in Alex with shops mostly owned by foreign nationals. “When they started looting then the police started firing. I was stationed at an intersection next to a police van and a police constable. I took cover behind a building, but I didn’t realise that the lady on my far right had started shooting at the looters. And I was shot in the right leg.”

After being shot he went to Alexandra’s station commander Colonel Johannes Tau and confronted him, along with the policewoman who had shot him. She denied it, despite Shiko having seen her firing at him.

Alex has been plagued by xenophobic attacks: Emmanuel Sithole was stabbed to death there during the trouble in 2016 (an incident made infamous by James Oatway’s shocking photographs in the Sunday Times). In 2018 Alex was again the site of rioting that left the area in disarray.

Shiko believes that, after the CBD was ransacked earlier, police should have been ready and waiting to pre-empt chaos in Alex. Instead, they were simply reactionary.

Before he was shot, Shiko interviewed a Bangladeshi who sells cellphones and curtains in Alex. His shop was looted and burned. “He was devastated,” says Shiko of a man who came to South Africa in search of business opportunity. “His shop didn’t have insurance and he can’t go home. He has no choice but to start his business all over again.”

Community journalists have limited resources. This goes for equipment and travel, but extends to how they may protect themselves. They don’t have the industry clout to make waves when they are attacked and, yet, during xenophobic episodes, they are arguably our most crucial reporting resource. “We face the same danger when covering breaking news as any national news team member,” says Marietta Lombard, Gauteng director of Forum of Community Journalists (FCJ). “We serve hyper-local news which is often not acknowledged, and audiences fail to realise the in-depth knowledge we have.”

Stories Shiko has been putting out on Alex FM inform his immediate community. For example, Shiko was keen to report that it wasn’t only the businesses of foreign nationals that were targeted. Big brands like McDonald’s and Pick n Pay have the security to protect themselves, but smaller businesses, like the shop where Shiko bought his school uniform as a kid, which has always been owned by South Africans, was looted and torched as well.

“This looting was not conducted by all the people in Alexandra, just a few criminals who look advantage of the tensions,” he reveals. And mostly they went after shops that were insecure, rather than those owned by foreign nationals.

At the FCJ’s 2019 annual general meeting, delegates resolved to try to highlight the value of, and dangers experienced by, community journalists. Last week, the FCJ raised its voice when a Joburg East Express journalist’s car was damaged and his camera bag taken as he covered the unrest in Jeppestown.

“The community newsroom is the perfect platform to hone journalists’ skills as watchdogs,” says Lombard. “It is in these newsrooms where journalists master covering various beats, taking photographs and, in recent years, compiling video and audio for online. It is here where they grow into multimedia journalists and learn to pursue those in power.”

Being shot has made Shiko feel the police don’t respect the work he does. He believes he should have received an apology, an explanation and perhaps even a lift to the clinic. His relationship with police spokesperson Captain Stephen Malatji has been mostly good but, when the shooting happened, Malatji showed little sympathy, claimed Shiko.

What hurt Shiko more than the bullet was that police lumped him in with the looting mob when they opened fire. The voices of our communities are vulnerable and we need to hold this brave band of reporters in much higher esteem and try to protect them.

Cliff Shiko is presenter and producer of Volume’s podcast ‘Local Focus’ that goes to under-reported areas and finds good stories. You can receive the show as a WhatsApp voice note (by sending a message to +27 60 954 1326). You can also receive ‘Local Focus’ as a regular podcast on iTunes or wherever you find your podcasts.