FSCA raids Survé’s offices, accuses ‘Pravin’ of being behind it 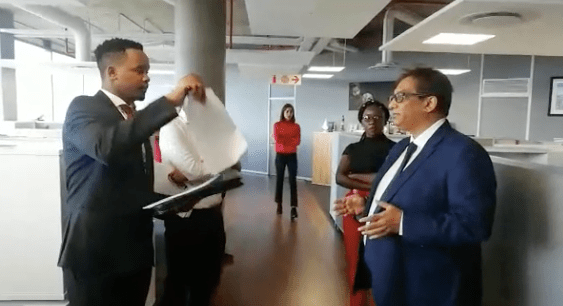 Photo: Screenshot of a video taking during the FSCA raid on Iqbal Surve's office

In a report posted on IOL, Survé said the raid on Sekunjalo Holdings and African Equity Empowerment Investment (AEEI) by the FCSA, who were accompanied by police officers, was “an intimidation tactic”. Their aim was to confiscate laptops and computer hard drives, he said.

In a video posted on IOL, Survé said media freedom and legal privilege issues were at stake. “That’s all it is. It’s Pravin Gordhan behind this, and certain people … it’s an abuse of regulatory authorities,” Survé told investigators. He accused the FSCA of approaching two judges for the court order allowing the raid. He said the first had refused but the second was “a friend of Pravin and the DA”.

Survé accused the FCSA investigators of trying to “get information that we have on Pravin Gordhan, on the president, various ministers and various others, OK?” He said this was because his reporters were about to publish stories exposing corruption this coming weekend.

“And that’s all that this is about. This is a fishing expedition trying to prevent that information being published,” he said.

In Survé’s view, the raid was also because his companies were fighting the Government Employee Pension Fund and the Public Investment Corporation.

Survé’s companies, including AYO and Independent Media, were the subject of questions during the Mpati Commission into allegations of impropriety at the PIC. The FSCA was tasked with investigating trades of AYO and AEEI shares on the JSE.

“This is political. This is Pravin Gordhan using state institutions to fight political battles because Independent Media is not keeping quiet about the corruption that exists among certain ministers, the SARS rogue unit… it’s an attempt to intimidate us.”