Mayans M.C.: the biggest series since Game of Thrones & The Walking Dead? 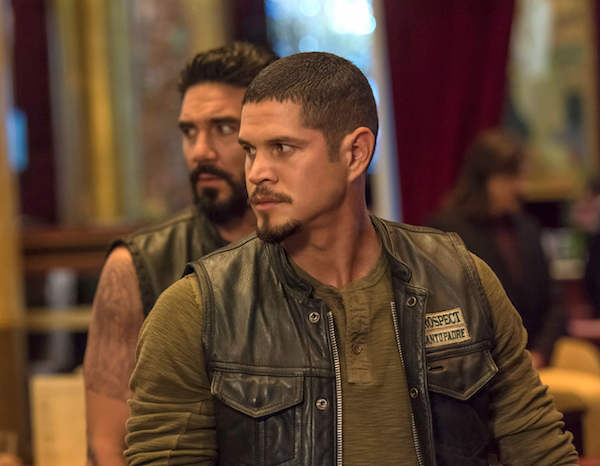 Nominated for Best TV Action Series at last year’s IGN Summer Movie Awards, Mayans M.C. takes place two-and-half years after the end of Sons of Anarchy and is set on California’s border with Mexico, where Latino biker gang The Mayans rules the streets of the fictional town of Santo Padre.

Ezekiel ‘EZ’ Reyes (Emmy nominee JD Pardo from Twilight: Breaking Dawn Part II and Drive) is a prospect trying to gain acceptance into the Mayans M.C. charter. Fresh out of jail with a trail of broken dreams behind him, EZ needs a place to belong.

His older brother’s club seems to offer that, if EZ’s ready for everything that comes with it – navigating the club hierarchy, turf wars, extreme violence, shifting allegiances and a dangerous emotional link to the head of the deadly Galinda cartel, just for starters.

Together with his father Felipe (Oscar nominee Edward James Olmos from Battlestar: Galactica) and his brother Angel (Clayton Cardenas from American Crime), EZ’s also trying to find out who killed his mother.

1. Season 2 had the third-biggest premiere of the year and is a hit with critics

The Season 2 premiere had the third-biggest scripted cable TV premiere of the year in the US, behind only Game of Thrones and The Walking Dead, and currently has a 100% critics rating on Rotten Tomatoes.

“If you liked Season 1, Season 2 is a lot darker,” said Olmos, who has a meatier part this time as he connects the dots (in that quiet, measured Felipe way) between his own violent history and the road his sons have taken. Olmos has also promised Season 2 will get “much more intense and rewarding.”

Co-creator Elgin James told Entertainment Weekly: “A lot of people have it coming… Last season was about secrets; this season is about retribution. As Malcolm X says, ‘The chickens come home to roost.’ But it may be on some people who might surprise you, not the ones you’re rooting to get theirs.”

3. There are loads of crossovers for Sons of Anarchy fans

As one of IMDb’s Top Rated TV Shows of all time, Sons of Anarchy won a Golden Globe and was nominated for multiple Emmys, People’s Choice and Critics’ Choice Awards.

Season 2 promises the return of at least two more significant Sons characters, including a familiar face (David Labrava) that no one (except the fans) will be ‘Happy’ to see…

Binge Season 1 and the first five episodes of Season 2 of Mayans M.C. now, with new episodes every Wednesday, first on Showmax in South Africa.

You can now also binge all seven seasons of Sons of Anarchy on Showmax.