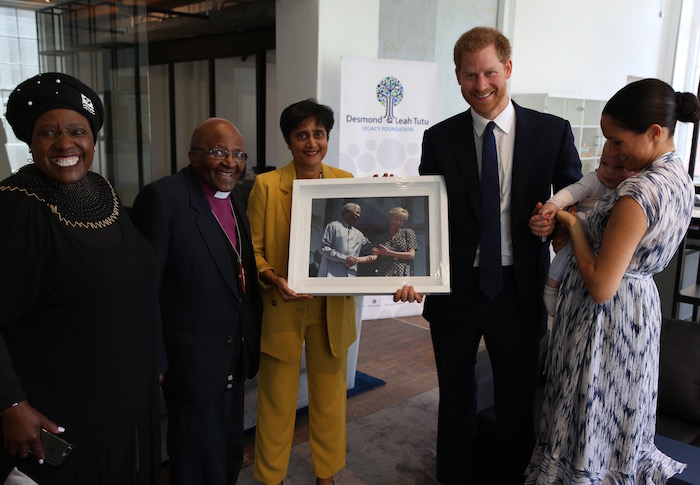 Photo: Archbishop Tutu and his daughter Thandeka with the Duke and Duchess of Sussex, and baby Archie/Benny Gool

The Duke and Duchess of Sussex have announced their intention to launch legal action against the Mail on Sunday for publishing a private handwritten letter the Duchess had sent to her estranged father. Prince Harry said in a statement: “I lost my mother and now I watch my wife falling victim to the same powerful forces.”

This latest episode follows two similar instances in September where high-profile sporting figures accused UK tabloids of insensitivity and invasion of privacy. The treatment of Ben Stokes and Gareth Thomas brings back to memory the litany of press abuses uncovered during the hearings of the Leveson Inquiry in 2011-12. Taken together, these sorry stories show the need for tougher regulation of media processes to ensure fairness for people directly affected by publications.

Thomas, a former Wales international rugby union player, revealed on 18 September that he had been compelled to publicly disclose that he was HIV positive after an unidentified tabloid had threatened to publish details of his diagnosis. This was essentially the same thing as threatening to reveal details of someone’s medical record or treatment. This type of information has always been seen by the courts as being worthy of privacy protection.

What makes the conduct of the press particularly egregious in this case is the callous behaviour towards a person who belongs to a particularly vulnerable group. The right and opportunity to tell something so deeply personal appears to have been taken away by a journalist who, according to Thomas, informed his parents of his HIV-positive status before he had the chance to tell them himself.

The Sun’s front-page story on the tragedy that affected the close family of Stokes, an England cricketer, about 30 years ago – before the player was born – was described by Stokes in a highly poignant statement on Twitter as the “lowest form of journalism”.

The newspaper defended its publication, stating that the unfortunate events were already in the public domain following wide coverage in New Zealand at the time and that an estranged family member had shared details. Although Clause 2 of the Editors’ Code of Practice states that “in considering an individual’s reasonable expectation of privacy, account will be taken of … the extent to which the material complained about is already in the public domain”, this is not always easily reconciled with how privacy law works.

The fact that the information was available was not decisive, the Supreme Court held. Such a proposition overlooked the invasiveness and distress which unrestricted publication by the English media would entail. The Sun should have known – not least because its own publisher was the defendant in the PJS case – that the same could apply to Stokes’ case. There was little doubt that publication in England would unleash, as the court put it, a “media storm”, which would reproduce intimate details likely to add greatly to the intrusiveness felt by Stokes and his family, who had not courted any publicity.

Occasionally journalists may act in a way that is incompatible with the Society of Editors’ Code of Practice. Breaches of some of the code’s provisions may be justified if an editor can demonstrate that what was done was “in the public interest”. This includes (but is not confined to) exposure of serious impropriety. Intrusions into a person’s private life may also be warranted to unmask hypocrisy and prevent the public from being misled. But Stokes’ story and Thomas’ treatment were nowhere near these exemptions.

Clause 4 of the editors’ code places the onus of responsibility for appropriate sensitivity in cases involving trauma squarely on the press and requires journalists covering tragedy and suffering to make inquiries with “sympathy and discretion”. But Stokes’ tweet stated that “serious inaccuracies” were included in The Sun’s article which, in his words, exacerbated the impact of the publication for his family. The same code also makes it very clear that a public interest defence cannot be put forward in cases which engage Clause 4.

Thomas’ public figure status cannot also, by and of itself, justify a threat to publish sensitive details such as his HIV status. The journalist who initially approached the athlete’s parents ought to have appreciated that it was not part of his role to break the news to his family, something which reportedly caused Thomas enormous upset.

In both cases, in my view, the press flagrantly ignored its responsibilities towards the public interest, in whose name it exercises its privileged position in society. There is always of course a considerable role to be played by the courts, which maintain powers to order exemplary damages (if sought through a privacy claim) in order to punish outrageous press misconduct that disregards claimants’ rights for commercial profit.

The treatment of the two sportsmen’s deeply personal stories has swung a wrecking ball through responsible journalism. It raises serious questions as to whether the tabloid press has learned any lessons from the Leveson Inquiry, which concluded “beyond doubt” that the British press had “damaged the public interest, caused real hardship and … wreaked havoc in the lives of innocent people” for many decades.

In 2018, the government regrettably decided against putting into motion section 40 of the Crime and Courts Act 2013, under which publishers not signing up to be members of a formally recognised regulator (for example IMPRESS) would be hit with the potentially severe penalty of having all the costs of a complainant’s privacy (or defamation) action automatically awarded against them, irrespective of whether they won or lost the case. Although this provision remains on the statute books, it has been vehemently opposed by much of the news industry.

Read more: Don’t believe what you read: section 40 will protect the local press, not kill it

Whatever happens in the case of the threatened action by the Duke and Duchess of Sussex, alongside the experiences of both Stokes and Thomas, one can now see less reason than in the past as to why this provision should not be put into effect. If it is implemented by a future government, it is likely to create an additional incentive for the press to think twice before publishing a story that unreasonably interferes with an individual’s privacy and lacks any meaningful public interest.

The Conversation is a member of the independent press regulator IMPRESS.