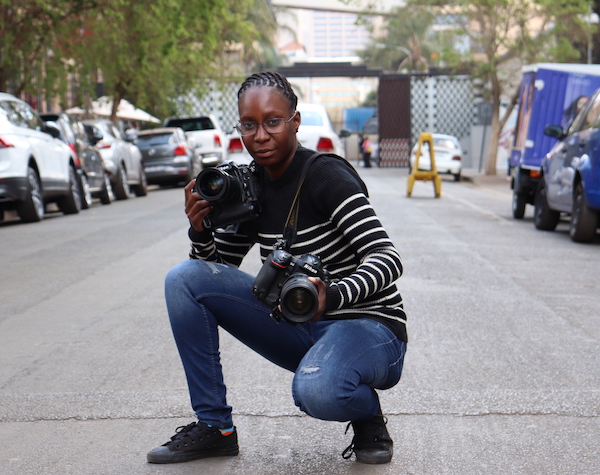 What led you to becoming a photographer?

I have a background in journalism and radio broadcasting. But it became clear photography was the best way to tell people’s stories, especially when you want to be authentic. Remember the saying “a picture is worth a thousand words”.

My photographic journey began in 2015. I had a Nikon D3100 and I enjoyed anything from capturing memories of family and friends to street portraits of strangers in the city. In April of that year there was an upsurge in xenophobic attacks and that was when I began photographing social issues.

The next year I signed up for the photojournalism and documentary programme at The Market Photo Workshop in Newtown.

You’ve mentioned that you cover stories close to your heart. Can you give us an idea of some of these stories?

One of my photographic social documentary projects, The Drowning Man, is about living with depression. The purpose is to educate the public about the condition and address the stigma attached to mental health disorders. I began this project when I was diagnosed with depression and I took a personal approach by turning the camera onto myself.  I’d been trying to hold it all together in the family after my mom was diagnosed with schizophrenia and my sister with bipolar disorder.

Celebrating Queer Love is an ongoing project. I am young, black, female and queer and I want to show the world that despite the brutality we face, we still exist and we still love. I was also trying to introduce queer love in the mainstream media. Instead of turning the lens on homophobia I turned it on love and tenderness within the LGBTIQ community.

I also did a feature on my father, James Msimango. Called ‘Season Endured’, the project began when I was questioning my identity and asking why my father wasn’t present.

Although he was an absent father, he always provided for his children financially. But like any other kid I longed for a relationship with him, so I decided to photograph him in the hope of getting to know him better. He’s a spray painter and the project shows how he manages to sustain himself and his children despite his hardships.

And through the work, we managed to develop a close relationship. This led to another feature called A Father’s Pride in which I took my first trip to my father’s home in Mozambique. Turning the lens on myself was one of the hardest things I’ve ever done.

My dad. The reason I am who I am today is because of my dad. He has given me every reason to soldier on. When I look at him and everything he has done for me, I just want to make him and myself proud. This is a man who once said to me “I would rather sleep on the floor with an empty stomach so you can get a decent education, I would rather starve so you could eat.” These are words said with a smile on his face.

In five years’ time you will be…An international, award-winning photographer, with solo exhibitions. I will be a business owner, a mentor and will be travelling the world. And I will have built my father a house in Mozambique and gotten him his own taxi.