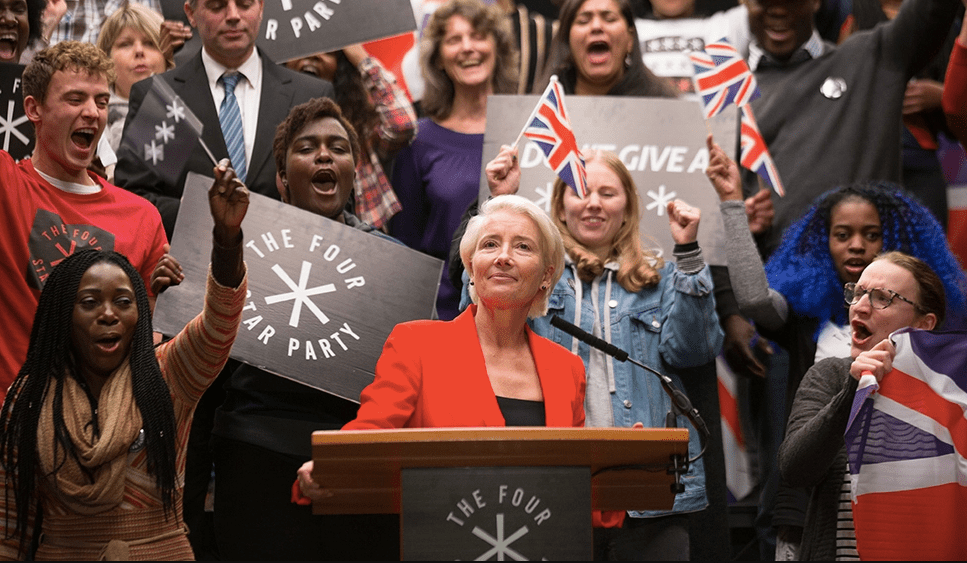 Blade Runner opens in Los Angeles, in November 2019. Furnaces burst flames into the perennial night and endless rain. Flying cars zoom by. The antihero film-noir detective, Deckard (Harrison Ford) has seen too much, drinks too much, and misses his mother between “retiring replicants”.

As in “Back to the Future day”, (October 21, 2015), which marked Marty McFly’s journey into the future in the 1989 film, the Blade Runner screenings came with a flurry of discussion about what the filmmakers got right and wrong. Environmental collapse, yes. But where are our flying cars?

So: what now that the future is here?

Our current versions of near future stories – namely the television series Black Mirror (now on Netflix) and SBS’s Years and Years – explore more extreme versions of the present.

Charlie Brooker’s Black Mirror is an anthology of standalone episodes, produced between 2011 and 2019, each set in a slightly different, undated, near future.

Years and Years, written by Russell T. Davies, bravely spans 2019 to 2034 with each episode leaping forward a few years through striking montages of fictional news events: the collapse of the European Union, the US leaving the United Nations, catastrophic flooding, mass migration, widespread homelessness.

We are in a very familiar world. The “near” is depicted in a realistic way through identifiable locations, documentary-style visuals, news footage, and lifelike dialogue.

Back in the real world, the future in the 21st century is unfolding in the palm of our hands. Elections are won and lost on social media, Sydney is covered in smoke. The rate at which technology is altering our lives is rivalled only by the rate we’re transforming our planet.

These shows explore these rates of change. In a 2016 episode of Black Mirror, “Nosedive”, every interpersonal interaction becomes a transaction: an extreme version of Uber Ratings with China’s Social Credit System.

Lacie (Bryce Dallas Howard) is an ambitious young professional excited by the opportunities higher ratings open up, such as discounts on luxury apartments, but being pleasant to her barista and workmates only gets her so far. So begins a perilous spiral of trying too hard to be liked, echoing the personality-as-product phenomenon of social media influencers around the world.

The standalone episode format of Black Mirror means it can be challenging to develop empathy for characters, consequently the interest often rests on the single concept or final twist. The episode “Striking Vipers” explores the possibility of extra-marital love between best mates in Virtual Reality; “Hang the DJ” envisions dating apps as an authoritarian apparatus.

Most episodes are neatly wrapped up for viewers to escape to for pure entertainment – but also to escape from each dystopian possibility.

In Years and Years, we follow one Mancunian family over 19 years. The series opens with Trump re-elected for a second term. In the UK, the unconventional populist Four Star Party, led by straight-speaking Vivienne Rook (Emma Thompson), rides to success on the back of social instability.

Sci-fi concepts are introduced early on so we can explore their evolution and implications. In the first episode, teenager Bethany declares herself “trans”. As progressive parents, Stephen and Celeste immediately comfort their child, who they presume is transsexual.

Bethany shrugs, “I’m not transsexual … I’m transhuman”. A concept not lost on Blade Runner fans who may be aware of transhumanist gatherings in Los Angeles in the 1980s, transhumanism is premised on the idea that humans have breached evolutionary constraints through science and technology. Biology is a restriction to the possibility of eternal life.

Read more: Super-intelligence and eternal life: transhumanism’s faithful follow it blindly into a future for the elite

Disgust and dismay ensue from parents unable to comprehend why their child wants to rid her flesh and live forever as data. Through the course of the series we see how Bethany’s transhuman ambitions influence her personal relationships, health, career trajectory, and political activism.

It even starts to feel normal.

Years and Years delicately resists portraying a dystopia, allowing room for technology to demonstrate a positive influence on society. “Señor”, the ubiquitous virtual assistant, connects the Lyons family whenever they wish. Like Alexa or Siri, Señor is always at hand to answer questions – but more importantly, facilitates an intimacy that could easily be lost to technological isolation.

In 2029, grandmother Muriel digs up the dusty digital assistant Señor because she misses its company. By now, virtual assistants are embedded into the walls and omnipresent digital cloud but the Luddite grandmother resists.

“I like having something to look at, I’m not talking to the walls like Shirley Valentine,” she says.

It’s moments like these that remind us of our agency over technology and hint at its revolutionary potential to connect us all.

Lessons for the present

While classics like Blade Runner looked to the future to ignite our technological desires, near-future fiction reveals how new technologies are injected into our lives with little choice as to whether we should adopt them and little thought to their long-term appropriateness and sustainability.

These shows ask us to be critical of what might seem like minor developments in technology and politics. In an age of rapidly changing political landscapes and the climate catastrophe, it can feel like we are approaching the final frontier. In creating stories set in the near, instead of the far, future, science fiction provides valuable lessons for the present.

In other words: the choices we fail to stand up for in the near-future may prevent us from having a distant future at all.