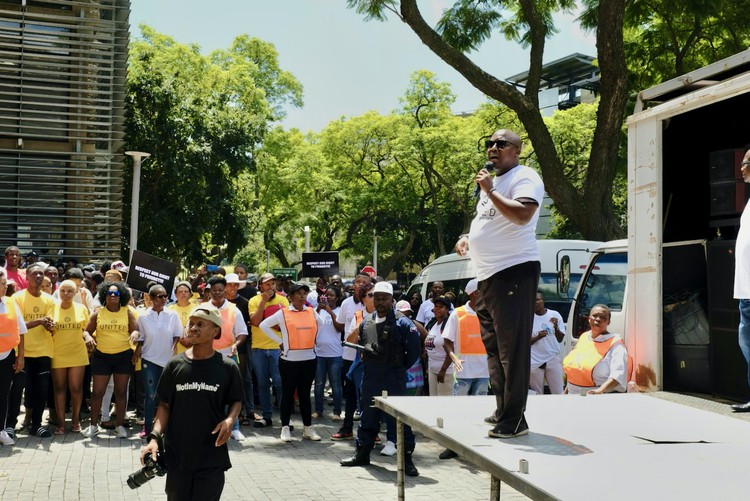 Under the umbrella of United Civil Society In Action, hundreds of people marched to the Department of Trade and Industry (DTI) in Pretoria on Thursday. They handed over a memorandum calling for action to be taken that protect NGOs and beneficiaries who receive funding from the National Lotteries Commission (NLC).

The march was aimed at GroundUp and freelance reporter Raymond Joseph who have since 2018 been running reports exposing unfinished projects and misspending of Lottery funds. At one point the protesters chanted: “Voetsek Raymond Joseph”.

The organiser’s claimed there were over 3 500 people. But police officers at the march and this reporter estimate that at no time were there more than 1 000 marchers. Attendees came in buses from Gauteng as well as the Western Cape, Eastern Cape, and North West.

The memo calls for the minister, Ebrahim Patel, not to publish civil society information, such as the NLC beneficiaries list, which has been issued to Parliament for the past 18 years.

Recently, the NLC decided not to publish its list of beneficiaries for its latest reporting year. This is the first time this list has not been made public.

The issue of consent

President of a group calling itself #NotInMyName, Siyabulela Jentile, said that “one of the conditions [to publish] in fact is that consent must be given” by the organisation. He said that some of the beneficiaries present at the march were saying that they are not giving this consent.

The memorandum also says it will “welcome and support all the efforts to root out corrupt activities” but calls on the minister to follow due processes and “neither suspend the board of the commission nor put the commission under administration”.

Of particular concern is that actions against the NLC will result in “disruptions in civil society’s developmental activities”, disadvantaging workers in the sector and beneficiaries.

Ntabiseng Vilakazi works at Sechaba Community Care centre in Ekurhuleni. She said she was marching because she wants the NLC to give NGOs more money, especially those that are run by black people.

“We want to fight the corruption that is happening because you’ll find most of the white organisations do get a lot of funds,” she said.

A further demand in the memorandum is an amendment to the Lotteries Act to make funding more “favourable to previously disadvantaged communities” and to change the requirement of a year’s break in funding after an organisation has received short term funding.

Several dozen school children were at the march, many wearing United Civil Society In Action T-shirts over their school clothes.

Jentile said that these were concerned student representatives attending and that when he had queried whether they should be in school he was told that their principals had been informed.

Angelien Lindi came from Worcester in the Western Cape to march. She runs a creche. She said she had not heard anything about corruption but she is looking for funding from the NLC. Speaking in Afrikaans, she said: “There is no help for us, that is why we are here today.”

Olga Maleho from Kimberley runs a soup kitchen with funding from the NLC. She said she was invited to the march by someone at the NLC.

Several people attending the march did not want to be interviewed by GroundUp, but said that they were not sure what the march was about but were told to come.

Chief of Staff in the Ministry of Trade and Industry Moosa Ebrahim received the memo. He said: “The Lotteries is a child of the Department of Trade and Industry and so we are also very concerned.” He assured the crowds that he would make sure the minister responds and apologised that the groups may not have received responses in the past.

The memo said the group will seek legal action if the minister does not take positive action towards its demands within three weeks.

Reaction to the march has been critical. Right2Know issued a statement on Thursday night saying it was “deeply disturbed by the stance taken by the self-proclaimed, “UNITED CIVIL SOCIETY IN ACTION” which is led by the South Africa National NGO Coalition (SANGOCO) and various other unnamed organisations”.

“[T]his so-called ‘civil society movement’, … appeared out of nowhere in the last couple of weeks. The stated purpose of the march – contained in a media statement issued by SANGOCO on Monday – was to raise concerns related to ‘attackers of the NLC’”

R2K further said: “What this refers to are the extensive allegations against the NLC related to the improper and fraudulent disbursement and use of funds as well as conflicts of interest surrounding monies meant for the upgrading of sanitation facilities at poor schools in Limpopo and the Eastern Cape. Further, there are serious questions that have been raised related to the subsequent silence around an NLC-initiated investigation into these allegations by an audit firm. The evidence for these allegations has been provided by in-depth investigative journalism carried out by freelance journalist Raymond Joseph through a series of reports published by GroundUp.”

Democratic Alliance shadow minister of trade and industry, Dean Macpherson, said he doubts that the publishing of the beneficiaries list will negatively affect beneficiaries, because this has not been met with great concern in the past and that it would be in everyone’s interest to understand where NLC money is going.

He said the civil society groups calling for action were “nothing other than fronts being pushed by those implicated in wrongdoing at the NLC to cover up for their wrongdoing”.

CORRECTION: The original wording on the NLC’s decision not to publish its list of beneficiaries was slightly inaccurate. We have reworded it.

© 2020 GroundUp.
This article is licensed under a Creative Commons Attribution-NoDerivatives 4.0 International License.

Elna Schütz is a freelance journalist based in Pretoria and Johannesburg, South Africa, is the founder of Podmeet, a networking and support project for the podcasting industry in Cape Town and Johannesburg.