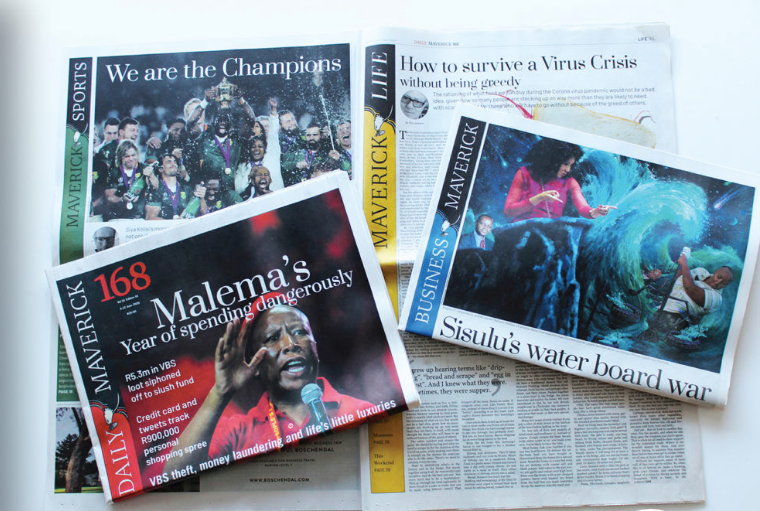 Fellow South Africans, we’re launching a newspaper. In the middle of the pandemic…

That’s the news from Daily Maverick, which is launching a weekly print newspaper in a move some believe is “madder than a bag of snakes”.

In an editorial published on the independent digital newspaper’s website today, the Daily Maverick’s management team announced Daily Maverick 168 (168 is a reference to the number of hours in the week) will sell for R20.00 but will be freely available to Pick n Pay Smart Shopper cardholders on Saturday mornings. The launch date is still to be announced.

“The team at Pick n Pay saw our bold, crazy vision and quickly became supportive partners in this project to help launch this global innovation in news media,” Daily Maverick said in its editorial. “Together, we’ll ask our most loyal readers, and Smart Shopper customers who read newspapers and magazines, to vote for the Pick n Pay store they would like us to launch with. The more votes your local store receives the greater the chance it’ll be included in our launch plan.”

Daily Maverick 168 will fall under the editorial stewardship of Heather Robertson and founding editor, Branko Brkic.

So what are they thinking? The idea of launching a print title in the midst of a global pandemic and “the greatest calamity to ever hit the global print media” seems insane, or “madder than a bag of snakes”.

“After surveying thousands of our loyal and engaged readers and analysing the consumption of our articles on our platforms, some aspects stood out for us. Even the most ardent Daily Maverick reader struggles to consume more than 5% of all the great stories we publish, which is these days up to 250 full features a week.

“This, coupled with the near-doubling of screen time for most of us these past few months, there is also a deep desire to indulge in current affairs without having to crook one’s neck while thumbing aimlessly into an endless scroll abyss on a tiny screen.

“We are all feeling overwhelmed, and these factors combined, overlaid with another significant issue of our time, the one of trust, belief and faith in news brands, has made digital media consumption an unhealthy habit,” the editorial reads.

It continues: “This may all seem anecdotal, but a survey of more than 30 000 digital consumers in the 2019 BrandMapp survey revealed that 81% of our readers, (and the country’s largest news website readers), still regularly read a newspaper – they just don’t want to pay for products that don’t make the grade.”

The team point out that the immediacy of digital is “taking control of our dopamine receptors by jabbing us with an intravenous drip of news with high-sugar and low nutrition, coupled with an endless feed of tweets and twak. The role of newspapers in our information diet was changing, and we knew that it would evolve into greater demand for the kind of long-form quality journalism that we had bet the house on”.

More to come on this story. In the meanwhile, the full editorial is here.