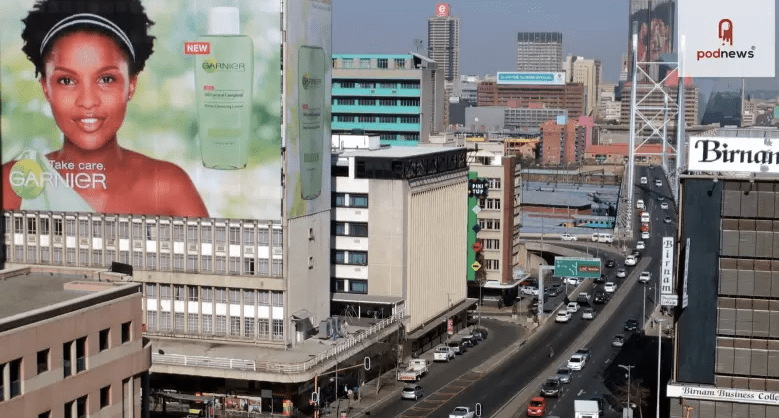 Johannesburg-based podcast production studio Volume got creative, using WhatsApp to shed light on how media startups in South Africa were reporting on the toughest parts of the Covid-19 pandemic.

In April 2020, Naeemah Dudan sent Paul McNally a voice note via WhatsApp letting him know she was editing a story in bed because she had a backache. It seemed like an intimate detail to share with someone she had only interacted with via WhatsApp and was speaking to for work purposes. But it was the exact type of anecdote that McNally was looking for.

Dudan is a member of the Hashtag Our Stories team, a South African-based mobile journalism company working with a number of partners, including Snapchat, to tell stories from all over the world. They were one of the South Africa-based media outlets whose work McNally and the rest of the team at Volume, a South African podcasting company, were profiling as part of their Media Diaries series.

Almost as soon as South Africa’s strict hard lockdown began in April – with only essential services allowed to operate, the army deployed to monitor that people stayed inside, and the sale of alcohol and cigarettes banned – the Volume team got to work. They had been partnered with the South African Media Innovation Programme (SAMIP) to produce an audio project that provided a closer look at how eight newsrooms, funded by SAMIP, were reporting on the pandemic. And this is when the Media Diaries series was born.

“In unprecedented times like this, it’s important for media to lean on each other and learn from each other,” says Dudan, who sent McNally a series of voice notes via WhatsApp detailing every aspect of her day, from what she ate to who she had meetings with and what she was working on. Dudan’s colleagues Imani Dlamini and Sumaiya Omar did the same, which McNally then stitched together, edited using Pro Tools, and provided narration for.

“We wanted to draw as much texture out of these voice notes as possible,” says McNally. Insert some background music, and all this resulted in an episode describing a day in the life of the Hashtag Our Stories virtual newsroom, that could be streamed on Volume’s website as well as podcasting platforms.

“This podcast tracks our journalists and editors in their intimate moments – as they send us voice notes via WhatsApp – and we document how they are coping and innovating around Covid-19,” the introduction to the series reads on Volume’s website. Co-founded by McNally and Roland Perold in 2017, Volume works on an agency model. Their work is underpinned by the intention to use podcasting as a storytelling medium, and they have made a model out of using their skills and platform to partner with organisations and amplify their work.

Another episode of Media Diaries profiled Scrolla, a mobile-first platform that reports community news in bite-size chunks. Reporter Everson Luhanga – previously a gardener who came to South Africa from Malawi in search of a better life – went into the township of Alexandra and broke the story of the death of resident Collins Khosa on April 10, caused by a brutal assault by members of the military and members of the Johannesburg Metropolitan Police Department (JMPD). It became a big national story, shining a light on the army brutality during lockdown. Documenting his reporting, Luhanga gave an insight into what the township environment was like under lockdown and how he navigated doing his work.

‘See how the sausage is made’

Both McNally and Perold see the series as a means of strengthening the credibility of newsrooms, especially in a context where there is growing media distrust. “If you consume media, you want to know a little bit about how the sausage is made,” says McNally, who believes that showing journalists’ reality allows for a more human look at who they are.

While publications such as Wits Journalism’s annual State of the Newsroom report provide insight into the South African media industry, the focus is largely on established newsrooms. Associate professor in the media studies department at the University of the Witwatersrand, Glenda Daniels, points out that there are “gaps” in terms of media reporting and media research work in South Africa. “We haven’t focused on start-ups, and podcasts, blogging, and journalist organisations with new models of funding,” she says.

For Perold, the series meant having a unique opportunity to elevate the profiles of smaller media organisations in South Africa, in a new way. “Using audio to tell those stories enabled us to add so much personality and colour to a story.”

New forms of a loved medium

Research from 2019 provided insight for the first time into South African podcast consumption, which remains burgeoning in comparison with the rest of the world. Edison Research’s Infinite Dial Report – one of the longest- running surveys of digital media consumer behavior in America – looked at a sample of 1510 South Africans from various age and racial backgrounds radio habits in major metro South Africa. The study found that only 10% consumed podcasts within the month before the date of the survey, lagging several years behind the USA and the other surveyed countries. At the same time, 68% of respondents had listened to AM/FM radio within the week preceding the date of the survey.

Radio has long been a strong and highly-consumed medium in South Africa, across divides, largely due to accessibility. AM and FM frequencies have given rise to many community radio platforms, which are often primary media sources for many people. Without the barriers of South Africa’s high data costs or the requirement to own a license for access to it, and availability in local languages, radio remains prevalent. “We live in a very video-saturated world, but audio is a lot cheaper to consume than video,” says Perold.

As the media industry has developed in South Africa, researchers Prof Dina Ligaga and Prof Sarah Chiumbu note that ICTs have “expanded communicative radio spaces and transformed the nature of audience engagement”.

Podcasting has allowed for even further transformation, also changing methods of production. Given this, radio futurologist and Podnews Editor James Cridland believes that podcasting in South Africa is a fast-growing market with huge potential for growth, challenged largely by prohibitive data costs in the country.

“Audio allows for people to be heard, an opportunity which South Africans are not always given,” says McNally.

This story was first published by Podnews.

Aaisha Dadi Patel is a writer and journalist, currently at the Wall Street Journal’s Africa bureau in Johannesburg. She holds an MA in media studies from the University of the Witwatersrand, where she lectures the subject. Follow her on Twitter or connect on LinkedIn