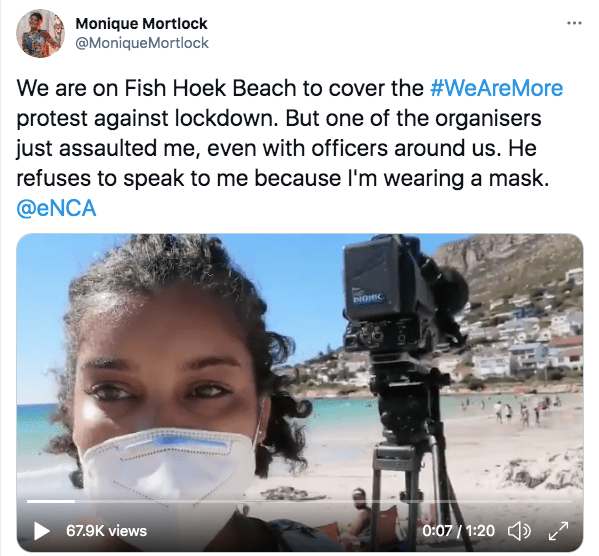 Two suspects, who allegedly attacked journalists covering an anti-mask protest at Fish Hoek beach in Cape Town, have been arrested.

The South African National Editors’ Forum (SANEF) welcomed the arrest, saying the suspects would face charges relating to assault and crimen injuria. SANEF thanked the SAPS for its prompt response.

On Saturday, eNCA journalist Monique Mortlock was assaulted while attempting to interview an anti-mask protest organiser at the protest. The man refused to speak to her and ripped her mask off, while another journalist, Athi Mtongana from Newzroom Afrika, was also attacked.

Mortlock tweeted, “We are on Fish Hoek beach to cover the #WeAreMore protest against lockdown. But one of the organisers just assaulted me, even with officers around us. He refused to speak to me because I’m wearing a mask”.

A demonstrator then threw her phone onto the ground when she attempted to conduct an interview.

Mtongana tweeted, “Protesters at Fish Hoek beach approached us and asked if we’re media. Told us that anyone wearing a mask supports paedophiles.” An old lady then proceeded to slap the phone out of her hand.

The South African National Editors’ Forum welcomed the arrest, saying it was “encouraged to hear that about the swift interventions of law enforcement agencies who reacted to the shocking attack on the two women journalists at the weekend and arrested some of the demonstrators concerned”.

SANEF noted that protesters took to the beach to call for an end to lockdown restrictions when the assault happened. “However, some broke the law and endangered the lives of the journalists on the scene by forcing them to take off their masks. SANEF wishes to remind communities that forcefully removing someone’s mask is an infringement to their rights to safety by the same people who want their stories told,” the organisation said in a press release.

SANEF said it was concerned that news reporters were being attacked by the same individuals who want their stories told and yet have no respect for media freedom and the rights of journalists to work without fear of intimidation and harassment.

“The attacks on journalists by members of the public which is becoming a worrying trend,” it said.

SANEF also called on media houses to provide counselling and mental health care support to all journalists – particularly during the COVID Crisis. “We once again thank the SAPS for stepping in and arresting those that broke the law and intimidated journalists.”