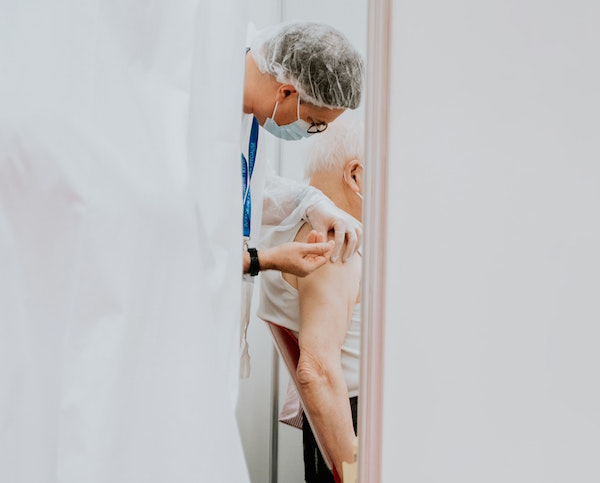 Phase 2 of the vaccination rollout began this week, with over-60s lining up to have the jab

It’s been a strange week. Let me start with #StateCaptureInquiry, the #ZondoCommission saw two big names this week. One was #BalekeMbete, her testimony was appalling and infuriating; she basically said that she ignored the entire #ArmsDeal report because no-one put their name on the bottom of it.

Who on earth would put their name on it? She also told us how very “busy” MPs are and that they have no time for unsigned paperwork. If that wasn’t bad enough, she said that the allegations and rumours of #StateCapture only made corridor talk very late in the day when there were many cadres already “caught” in it. Why are you here, #Mbete? Why aren’t you behind bars?

There were several other witnesses, some of them anonymous and then in walked #NormaGigaba and she brought a bakkie-load of files with her and dumped them on the commission’s floor. She told the inquiry how #Malusi hated #DuduMyeni and that the #Guptas were his #SpecialAdvisors. Of course #Gigabyte had denied all these allegations but hell hath no fury like a woman scorned, #Norma didn’t stop to take a breath while she batted every denial with almost rolling eyes. Midway through telling us how Malusi counted his cash and transported it from bag to bag, the Advocate interrupted the proceedings to say there was a serious security threat and a subsequent motion to adjourn. After five minutes the #DCJ adjourned the session. I took to social to see what the real story was, dololo. What’s going on? Is Noma/Norma safe?

There’s politics everywhere, there are protests everywhere and that’s not news because, well, #Elections2021. The by-elections left the EFF with egg on its face as the hashtag #EFFIsFinished started to trend. The EFF has had quite a week as they had to #PayBackTheMoney for the damages for the #Brackenfell protests too. Phumzile van Damme resigned from the DA; she’s too good for politics, and definitely too good for Zille. The IFP slammed the ANC about #Buthelezi. I seriously can’t keep up.

You’ll know that the #ZumaTrial was postponed for the eleventeenth time but when Zuma and his cronies started addressing the crowd outside there was heckling and booing (heaven forbid) for #Zikalala and #Ntuli. This is bad everyone, very bad, so bad that there will be an enquiry launched into the “booing”. Why? Well, it must be because the crowd were paid, or is that just cynical me? Zuma also wants Advocate Billy Downer out, (probably because he was involved in putting Schabir Shaik away). Ace #Magashule never apologised; in fact he laughed at the journalist who asked the question. And then? Well, he said he’ll bring the whole of the #FreeState to #ZumaTrial, as if the #FreeState is some sacred place where he is regarded as king. Did you see the looted mess you left, Ace? I’m not sure you’ll need many buses.

#IEC launched a commission to assess our readiness as a nation to hold elections; we’ve never been ready, but we always do it, it’s the South African thing. It’s impossible and then it’s done. Just enforce the two metre apart rule and mandatory mask wearing and we’ll be fine. We do have a massive problem with these elections, though, as we don’t have anyone to vote for.

I was encouraged by the #VaccineRollOut and #PhaseTwo this week. I heard many ground reports on the ease of access and organised rollout here in rural KwaZulu-Natal. Well done guys.  The vaccine and the #ThirdWave are probably this week’s biggest story. It feels good to see corporate and government working hand in hand to get our country vaccinated.  We saw the President in France talking about #VaccineApartheid and the limitations of local production because of “intellectual property rights”. There are rumours that a harder lockdown is on the cards.

#MangaungShutDown left the body of a child who died apparently at the hands of a foreign national. Vigilantism took over #Zandspruit as nine men were corralled into a sports field and set alight. Six bodies, my eyes won’t compute what I saw.

In other news #FindSimphiweManzini was a hoax. A Cape Town bully sets a pupil’s hair alight. The school rapist on the run handed himself in, Redhill tried and failed to silence its students and alumni on #Palestine. Bonang is suing Rea because of his comments on AKA’s drug abuse; he called out Bonang as the one who “introduced AKA to cocaine”. Modjadji, the Rain Queen, is not ready for the throne apparently (it was a man who said that), the rand is performing better than ever before as the repo rate is on hold and Heineken bought Hunters and Savanna.

Across our borders I watched again, with horror, the children killed in the war between Palestine and Israel, their bodies filling up my timeline like the tears in my eyes. Rumours of a cease fire are making headlines this morning, humanitarian aid for the Palestinians was stopped by Netanyahu so I pray that the cease fire statement is true.

After the horrific two weeks in media, my mental state needs a break so I’m taking next week off. Please don’t send me any headlines, just register for the vaccine as it’s the right thing to do. I’ll be sure to tell the Potato Bass (18m under) that you send your well wishes. There is no signal underwater so sadly you can’t tell him yourself.