Creative storytelling in radio and moving beyond fake news 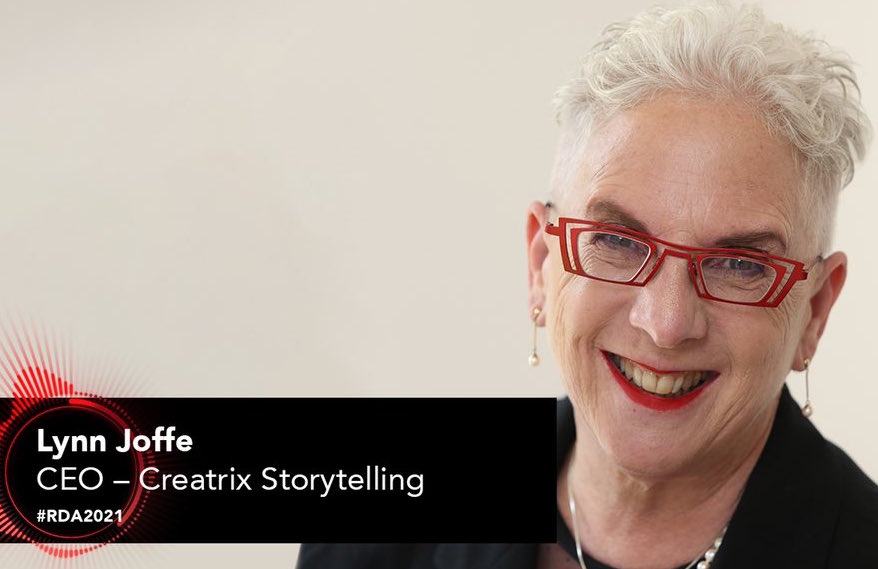 Calling all storytellers! Radio insiders will know all too well about the power of viewing the medium as the ‘theatre of the mind’. Day 8 of Radio Days Africa took the idea to another level, in a double masterclass session hosted by the legendary Lynn Joffe, titled ‘Creating an Audio Brand Story’.

Joffe has over four decades of experience in the creative industry. These days she heads up Creatrix, a company that is responsible for some of the most impactful storytelling campaigns in South Africa. She’s also recently upgraded her ‘creative maverick’ status by publishing her debut novel, which British icon Stephen Fry referred to as “alive, wicked, mad and full of surprises”.

The morning session started with her positively beaming while talking about how she “fell in love with radio” over the course of her career. Shortly after, she started diving into the power of storytelling. “We are wired for storytelling for various reasons,” she began. “Since our ancestors crawled out of the swamp, we’ve been telling stories”.

Referencing the act of doing so on radio, she reminded attendees that as soon as they go on air, they are talking to a single listener, not a mass of people. “[Radio is] intimate, and it connects people”, she added, before highlighting how metaphoric language can be used to stimulate imagination. “Remember that you are the director of an entire play inside your mind”, she said.

Joffe also mentioned that good radio always has a story arc. She said that the goal should be to get a listener to feel differently than they did before you started telling the story. “What do you want your audience to feel and what do you want them to do?”, she asked rhetorically. According to her, these two things are closely connected, and the listener won’t act if they haven’t felt anything. “Value is the soul of good radio”, she added to reiterate the point.

But what does good radio even sound like? Joffe came prepared with a series of ad spots to demonstrate what she called “outstanding radio”. These were part of older campaigns from Savanna (‘Take a Savatical’), KFC (‘The Burn’), City Lodge (‘The Cost of Being a Zulu’), Brand South Africa and more. They showed the talents of local storytellers, voice over artists and producers.

She encouraged delegates to pay attention to the role of music to enhance the impact of each spot. This included also recognising how audio can be filtered to create a more realistic listener experience (like the “voice note” static effect on the Netflorist ‘Smooches’ ad). If you’re a content creator, it’s worth listening to the podcast recording of this session just to be able to hear these ads a couple of times over.

The masterclass wrapped up with some homework for later, with Joffee asking attendees to define their own brand value alongside writing a 30 second radio spot that taps into this. The afternoon session was dedicated to her giving direct feedback about these ideas. Those who didn’t manage to take part in the activity still walked away with a key insight to take forward into how they find and grow their own brand. “Find something in your life that made you who you are today,” Joffe said. “This is the key to finding your brand value”.

The other afternoon session took a more serious tone, and was titled Beyond Fake News. The discussion covered the worrisome spread of disinformation around the world in the wake of the ongoing Covid-19 pandemic. It also touched on how easy it is to spread fake news in an age where social media has a permanent role to play in the daily lives of millions of people.

Nigerian media trainer and fact checker Nelly Kalu was back in the hosting seat to talk to Marianna Spring (specialist disinformation and social media reporter at BBC News in the UK) and Peter Mwai (fact checker at BBC Reality Check in Kenya) about this and the related challenges. They also set out to uncover what people can do to help keep credible news as close to them as possible.

Spring works closely with fake news every day. Referencing the pandemic right off the bat, she shared a few stories where the impact of disinformation could be felt directly. One of these was related to a man who didn’t believe the virus even existed as a result of a conspiracy theory he had heard, only to get infected and pass away from it shortly after.

She also mentioned anti-vaccine conspiracies and their rapid spread in Africa in particular, as well as the rise of “violence that was inspired by disinformation” in India and the United States. Social media is a driver for the spread of disinformation, and according to her it can be hard to investigate, especially on platforms like WhatsApp where interactions are not happening as publicly as elsewhere.

Above seeing a rise in anti-vaccination content, Spring also saw extremists using the heightened isolation and void in social gaps during lockdown as an opportunity to get their conspiracies to take hold. This “tailored disinformation” specifically targeted vulnerable groups where it would be easier to make a substantial impact.

An example of this is the spread of a conspiracy theory targeted at young women, which falsely suggested that the vaccine will make them infertile. Many other groups have been targeted as well, and it’s clear that conspiracy theorists know exactly how and where to leave bait to catch their vulnerable prey.

Referencing the situation in Africa specifically, Mwai called for more digital literacy campaigns, purely based on the fact that many people don’t realise that anybody can share anything on social media at any time. In some regions, because Facebook comes pre-loaded on smartphones, many people can’t distinguish it as a separate entity from the device itself. This creates automatic and somewhat “blind” trust.

He also advocated for better fact checking regulations “covering how journalists and professionals are operating offline and online”, in order to curb the spread of disinformation on both sides of the spectrum.

The discussion today showed that the world has a long way to go in order to control the spread of fake news and disinformation. “The most worrying part of my job is that I don’t see any solutions,” Spring said. She agreed that social media literacy is one part of the work that has to be done, but still calls the constant “dripping” of fake news tremendously pervasive. Kalu pondered whether prebunking — which involves anticipating what is going to spread and debunking it before it takes root — could make an impact. Mwai was quick to add another layer to consider: whether the acknowledgement of an influential media house doesn’t end up giving more traction to a conspiracy theory or a piece of fake news to begin with.

Although it might feel a little like Pandora’s box has been opened for good, Spring encouraged attendees to start by doing what they can to curb the spread of fake news among their own friends and families. “Stop and think before sharing anything on social media,” she said. “Ask yourself whether you know where it is coming from, and whether you trust the source”.

At the end of the day, this simple act may end up saving someone’s life, after all.