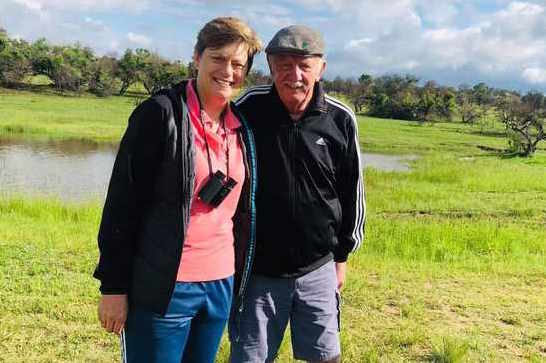 To the last, Val remained a working journalist: Val Boje with her husband, Ray Devenish/supplied

Died Zuid-Afrikaanse Hospital, Pretoria 7.45am 4 October 2021, of heart failure while waiting to have a heart valve replaced.

Editor of the Pretoria News for eight years, until she recently stepped down.

She joined the Pretoria News as a junior reporter in January 1980, after graduating from Rhodes University with a BA Journalism.

Val spent her entire working life with the Pretoria News, devoted to informing the people of the city.

She was an outstanding municipal reporter who built up an extremely good network of contacts among staff and councillors of the then Pretoria City Council with a reputation for accuracy and deep understanding of municipal affairs.

Thanks to an excellent contact at what was then Johannesburg International Airport, she was among the first reporters on the scene when Pope John Paul made an unscheduled stopover in South Africa.

After starting a family she switched from reporting to newspaper production and rose to become chief sub editor and was chosen as part of a select team to take the Argus Group into electronic editing, with the Pretoria News leading the way.

Her switch into the executive ranks saw her becoming editor for eight years, making her the longest serving editor in the Independent Media group.

Val was an extremely compassionate person, ever willing to help anyone who wanted to learn and – as far back as her early years as a reporter – developed a reputation of becoming the newsroom ‘mother’ from teaching new staffers where and how things worked to being a capable and helpful listening ear.

As a mother she produced two wonderful children in John and Christine; as well as helping form and guide her step son Greg. Val was completely enamoured by her grandchildren Liezel and Michael and the last images we have of her is a video she shot in hospital explaining the various tests she was undergoing.

To the last Val remained a working journalist, building up a reputation for covering the city’s diplomatic beat, apart from her editor’s duties, and continued to submit pieces, notably for the Weekend edition.

She was also determined to put – and keep – Pretoria on the news map, taking over as chairperson of the National Press Club and helping develop it into a force in the new field of electronic and remote news conferences.

As a wife she put up with my nonsense and sometimes wild and outlandish schemes for 38 years 11 months and four days – our 39th wedding anniversary would have been on 30 October.

But the real tributes have come from her friends, colleagues and the people and organisations she wrote – and cared – about. These reflect her integrity, work ethic, compassion, dedication and love of the city and its peoples.

Val was branded the ‘Chief Brownie’ by long-time colleague Franz Schaefr who, probably slightly irked by the volume of stories she generated about Scout and Guiding activities, looked up one day to see her in a new brown outfit with natty pockets.

“Look,” he cried, “it’s the Chief Brownie…” And she featured in over 700 Wayfarer columns.

This tribute to Val Boje was first published by the Pretoria News and is republished with the permission of the writer, her husband, Ray Devenish.

Roy Devenish is features and supplements editor at the Daily Sun.