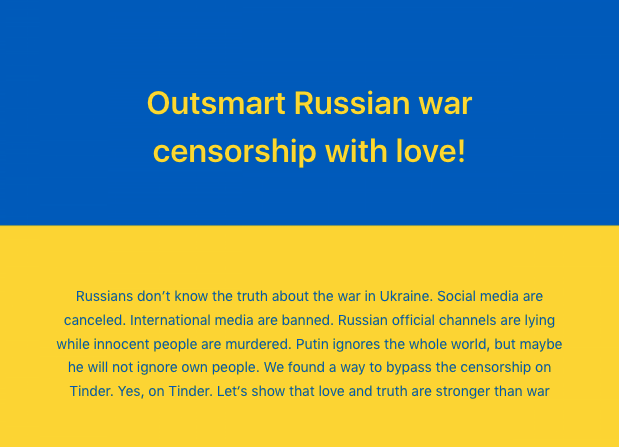 The Special Love Operation website is inviting people from all over the world that have Tinder Plus accounts to help spread the truth to Russian people through pictures and messages.

The last two years have seen a new set of challenges impact the globe, from the Covid-19 pandemic to the Russia-Ukraine conflict, there is no doubt that our ‘normal’ has shifted. It is in this space of change and challenge that businesses and individuals seek to create impact in their own way.

In times of great crisis, a well thought out creative campaign can be the first line of defence for the latter to connect with the former. The result may even create more thoughtful and sustainable impact.

Having creative freedom often means being in the firing line. Marketers executing campaigns and presenting new ideas to encourage hope during times of uncertainty, certainly do have a challenge to prove the pen is mightier than the sword.

Creative freedom in a crisis

Creative freedom in the traditional sense is connected to artistic freedom, which is the ability to create freely without being censored. Although this should always be encouraged, if we consider the term specifically within an agency context, the idea of creative ‘freedom’ can be specifically linked to the ability to create under duress, or in or in a contextually difficult moment or place in time.

Having the ability to create and innovate — ideally in an environment that can inspire new ideas and open different perspectives — is crucial for agencies to hit the mark for their clients during tough times. The following three campaigns showcase the profound and powerful impact creative freedom can have in practice.

‘Creativity Goes On’ by Apple

The last two years have been filled with change. Marketing teams have had to work hard to retain their creative freedom in a time when most have been running on fumes both mentally and emotionally. Agencies and individual businesses with a view towards nurturing creativity and supporting their teams, have been at the forefront of innovative and impactful campaigns.

Apple is a brand that showcased their ability to share appropriately toned messaging during this complicated time. Their Creativity Goes On campaign perfectly captured the feeling of being stuck at home, while reminding people that we’re all in this together. It even managed to spread a message of gratitude for healthcare workers too. The ad showcases adaptability and resilience in action, while spreading an important message of hope.

The well-timed campaign worked because it added value without pushing any formal salesmessaging. They showcased their expertise as a trusted support in a gentle way, rather than claiming authority as one of the most powerful companies in the world. They also conveyed much needed compassion and understanding. They got across that they were “here” for customers and that they will still be here once the pandemic has run its course.

Another example of excellent creativity was borne out of the ongoing conflict between Russia and Ukraine. Despite the devastating nature of the war — as well as the implications for peace all over the world — it showcases that excellent creativity is possible no matter what. Alex Strimbeanu from Jandl Agency in Slovakia is living proof of this.

Along with a group of other creatives, he recently “hacked” the popular dating app Tinder, but not in the way you might think. Strimbeanu thought of the idea after hearing that Russian soldiers were (bizarrely) using Tinder to try and match with Ukrainians. He wondered how the uncensored nature of the platform could be used in a more productive way, especially at a time when the Kremlin has been tightening what can be accessed online.

‘Special Love Operation’ was born shortly after. The premise of the campaign was to begin to use the platform to share independent updates about the war to Russian citizens. Global Tinder users were encouraged to change their location to a Russian city, upload a profile picture related to the war, edit the ‘About Me’ section with a united message, as well as to swipe right on all Russians that show up on the feed so they can see it. This not only curbed fake news, but also encouraged connections and support between anti-war Russians, Ukrainians and people from elsewhere too.

A recent crowdfunding campaign also proves that it’s possible for high level creativity in the middle of a crisis. Conceptualised by London based campaigner Rob Blackie, it asks for donations for a team of pro-bono marketers to run pay-per-click advertising campaigns sharing independent news on Ukraine to people living in Russia.

Although the team of marketers must stay somewhat vague about the actual content for safety reasons, they estimate that a donation of £10 equals roughly 1000 ad impressions. As of April 2022, over £40 000 has been raised so far. As a result, they’ve reached thousands of people on the ground already, proving that with a good idea, access to funding and a team of well-intentioned experts, anything is possible.

A well-executed creative campaign not only evokes a positive response in people but can have a profound impact on the world. Someone on the receiving end of a thoughtful idea or campaign is more likely to be inspired to create something unique themselves. This leads to further opportunities for creative freedom to flourish and may even inspire agency marketers to elevate their efforts too.

The pandemic has already shown that we have the tools and means to be resilient in times of great uncertainty. This extends beyond working to salvage the bottom line. We have a shared responsibility to spread hope through new creative campaigns. These should drive connections between brands and their customers, while also encouraging the same from person to person.

The creative pen continues to be a powerful tool in the efforts of modern-day media messaging. Supported by the microphone, camera, and mobile phone, it is our responsibility to continue fostering creative freedom, no matter how difficult the circumstance may prove to be.

Candy Dempers is managing director of MediaHeads 360. She has loved all things media for 23 years. A sales and marketing specialist, her first love was radio and bringing brands and platforms together. Her specialist field has expanded into television and digital media where she heads up the team at MediaHeads360. As a specialist agency her task is to ensure brands captivate consumers through amplified messaging and activated ideas.