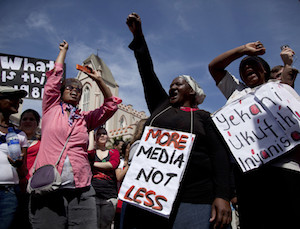 On 19 October 1977, the apartheid government in South Africa banned The World, the Weekend World and arrested the newspapers’ editor Percy Qoboza. Pro Veritate, an ecumenical newspaper, was also banned. The day was named Black Wednesday and is commemorated every year. It serves as an opportunity to take stock of how the country is […] Read more