LATEST NEWS
Home Out of Home Cape Town, banners and billboards – and lots of huffing and puffing

Cape Town, banners and billboards – and lots of huffing and puffing

Posted By: Glenda Nevillon: January 21, 2016In: Out of Home
Print Email 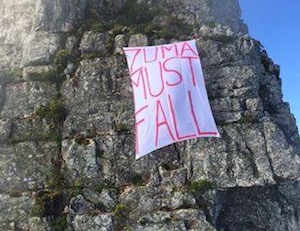 OPINION: If the political temperature ahead of 2016’s local elections is anything to go by, political campaigning is going to be ruthless and much of it conducted via billboards and banners.

The hugely controversial Zuma Must Fall banner erected on a building in Cape Town and a DA billboard in Johannesburg accusing Zuma of being responsible for rising unemployment have been dubbed ‘racist’ by the ANC. Of course, cynics would say the furore has been stoked by the ANC and supporters ahead of the municipal election to divert attention from issue such as ‘Nenegate’ and daily service delivery protests.

The #ZumaMustFall hashtag, of course, first came into being during the #FeesMustFall protests at the end of 2015 (as did #BladeMustFall). It wasn’t dubbed ‘racist’ then. But the hashtag was hijacked by the general South African populace at the height of the (ongoing) drama over Zuma’s axing of finance minister Nhlanhla Nene in the middle of December 2016. But once whites (and many others) took to the streets in protest on 16 December, using the Zuma Must Fall slogan, it became racist.

That was the day the first Zuma Must Fall banner went up. On that day, at the Cape Town march, unknown citizens managed to hang a huge Zuma Must Fall banner off Table Mountain. It wasn’t there for long, but it had people talking. No one called it ‘racist’ but mountain users were livid that it had been hung there at all, and complained bitterly to Sanparks.

Table Mountain not a billboard site

It was, nevertheless, illegal.

Table Mountain National Park manager Paddy Gordon, and visit safety unit ranger, Hilton Blumeris, told The Media Online rangers “were engaged to immediately remove the banner, but it was removed before we got there”.  Quite how it was hung and who did it remains a mystery.

“It is illegal under the National Environmental Management Act, 1998 sec 18(6) 43(j) 43(k) regarding placing, displaying or distributing any advertisement promotional material or notice anywhere in a special Nature Reserve, National Park or world heritage site without written permission of the management authority,” Gordon said.

“We strongly object to the use of the mountain as a billboard, whether banners or laser projections; objectionable statements like these is part of our reason for enforcing this restriction,” he said.

Ignore out of home bylaws at your peril

The ANC has accused the City of dragging its feet in charging the owner of the company – Independent Outdoor Media – who rented the space on the Kloof Street block of flats and accused it of taking its time in taking down the illegal banner. It was erected on a Friday and was down by the next day.

Chief whip Stone Sizani, via his spokesperson Moloto Mothapo, said “It is clear that there was conspiracy between the DA-governed Metro and the company that put up the illegal banner, with the city turning a blind eye and publicly acting outraged by the illegal erection”. The City failed to send metro police to stop the erection of the billboard, his office said.

As any out of home media operator in Cape Town knows, the City of Cape Town strictly enforces by-laws relating to the billboards, banners and even street pole advertising. Take them on at your peril!

Spokesperson Priya Reddy told The Media Online that even though the banner was violently removed by a group of Zuma supporters, who invaded the building from which the banner was hung without police lifting a finger to stop them, the City would still prosecute the offenders who put up the banner.

“The signage structure (which held the banner up) remains on the building and this is in contravention of the bylaw,” she said.

The ANC, however, didn’t have anything to say about its supporters forcibly invading a private building where people live to tear down the banner. Reddy said this was an “illegal action” too, but that it would be handled by the South African Police Service.

The Media Online contacted head of communications for the police in the Western Cape, Brigadier Potelwa, to ask what, if any, actions would be taken against those who stormed the building and why the police allegedly did nothing to stop them. Photographs certainly show police presence, but no arrests were made. But there was no response from SAPS.

Reddy, asked if the City had heard from the owner/s of the block about the poster and the subsequent invasion of the property, said, “The City will serve a compliance notice on the signage company as well as the landowner/body corporate of the block of flats”.

Now the out of home site has a huge South African flag hanging from it. And nobody has any idea has who is responsible. We await the next instalment of the ongoing billboard saga. 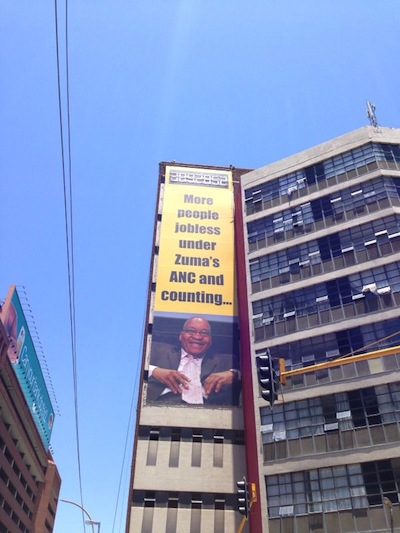