SONA 2016: All eyes on Zuma as reputation takes a dive 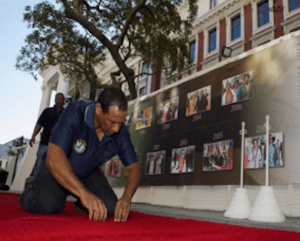 When President Jacob Zuma takes to the podium for his eighth State of the Nation Address tonight, he will never before have been so unpopular.

“One of the most notable changes in media reporting this year, when compared to last year, is the prominence of the country’s economic situation,” said researcher Jordan Griffiths. “With the country’s weakened currency and poor growth, economic reporting was among the key drivers of coverage for the President. This comes in the wake of his decision to recall finance minister, Nhlanhla Nene. A decision which drove his tonality down to the lowest levels seen for last year”.

Griffiths said Zuma has a higher critical rating in the media. “Across the topic groupings for the last 12 months, the President’s media image was shaped by reporting on how he has been perceived by the media, society and politicians. Parliamentary work also emerged as a top image driver as media coverage on the President heightened during his question and answer sessions. Government spending has faced the most risk as media were critical on matters such as how corruption was undermining the work of the government. Media reporting on Nkandla also drove risk towards matters concerning government spending,” the Media Tenor research showed.

It is interesting to note that research by digital agency 25AM, using its Salesforce Marketing Cloud Social Studio software, found that South Africans are using their desktop computers and office connectivity to discuss Zuma, particularly around Nkandla and the #PayBackTheMoney campaign. The software analysed social media conversation about the president’s “home improvement woes” between 1 December 2015 and 10 February 2016.

It found that the Economic Freedom Front’s (EFF’s) ability to mobilise supporters on the streets is helping it to dominate the social conversations about Nkandla.

“The Presidency issued a statement at around 10:20pm on 2 February, in which President Zuma offered to pay back some of the money.

“But conversation about the topic only started to surge when South Africans went to work on the morning of 3 February, peaking between lunchtime and 6pm. Twitter dominated the conversation around hashtags such as #PayBackTheMoney and #NkandlaPayback. From 1 December 2015 to 3 February 2016, there were 16 339 mentions of the #PayBackTheMoney hashtag, 99% of them on Twitter. Comments with a negative sentiment outweighed positive mentions by more than two to one,” 25AM reported.

#PayBackTheMoney mentions – 22 776 – almost double those on #SONA by 10 February, when the Constitutional Court heard arguments from counsel representing the Democratic Alliance and the EFF about why the Public Protector’s findings should be binding.

“What we take from this is that South Africans rely on the media for information, but take their discussions about the news to Twitter,” says 25AM CEO, Andre Steenekamp. “Perhaps with so many mainstream publications disabling user comments they have nowhere else to go.”

Steenekamp said most people are discussing topics such as Nklanda during the working day, indicating that they still prefer composing their commentary on an office computer’s keyboard. “For the two months leading up to the Presidency’s statement, discussion around #PayBackTheMoney was relatively muted,” he adds. “South African Twitter users like to weigh in when the topic is really hot.”

Another media research company, ROi Africa, reported news up to 7 February was also dominated by #PayBackTheMoney and #Guptas.

“Combined these stories amount to over one third of our news reporting. #ZumaMustFall and #IEC2016 over 13% of the news reporting in 7 days,” ROi Africa said. “ROi Africa saw the Social Media charts dominated by one story, #PayBacktheMoney, pushing both #zumamustfall and #GarethCliff off last week’s charts. Another big entry is #Sona2016 with over 6% of the social media conversation.”

Media Tenor said in the run up to SONA 2015, media focused on how the EFF intended disrupting the speech. “The President also faced less risk in the way he had been framed in relation to the media, society and politicians,” it said.

But now the discussion has changed. “The Constitutional court case on Nkandla has directed media reporting on justice. The economic situation of the country, which was not even within the top 10 topics last year, has also directed media attention. This is due to the weakening rand and slow growth,” it said.

This year, and this month, could be the president’s “busiest month in media”, Media Tenor said, noting that his major risk came in December after the disastrous decision to fire Nene.

“The decision was not well received in the media and drove down tonality to its lowest levels for the entire period,” MediaTenor’s research showed. “Considering the Constitutional Court case on Tuesday and the hype around this years SONA address, it is expected that February 2016 could be the President’s busiest month in the media.” 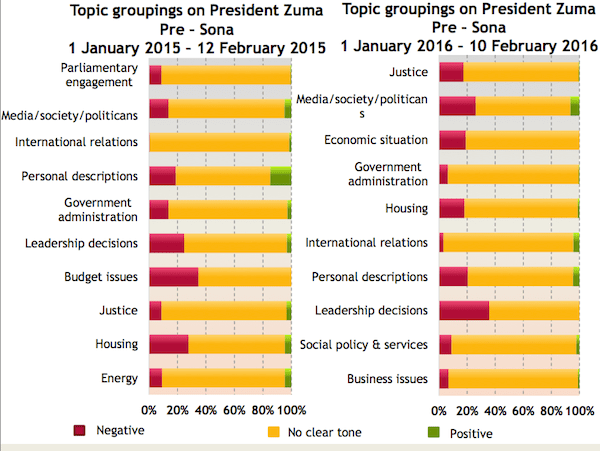 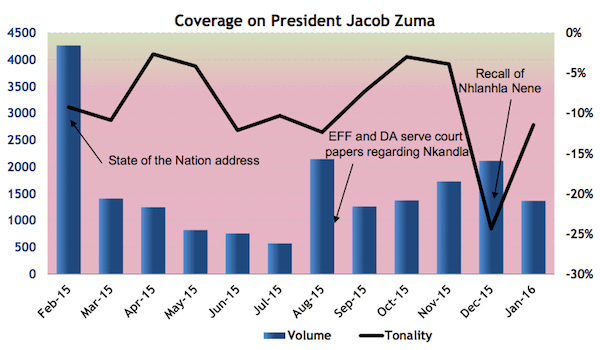