South Africa has plenty of busy roads – and this one might just be the busiest. Two million vehicles drive along the Western bypass of the N1 highway in Rivonia each month, according to a recent count by Kantey and Templer Engineers. In establishing a new 4.5m x 18m LED screen billboard on this site, Primedia Outdoor brings its clients’ messages to bear on a vast number of commuters, and in a highly desirable location.

The digital billboard is situated between the Rivonia Road off-ramp and the Bowling Road flyover, and went live on 3 February with Telkom’s ‘Bolt Speed’ advertisement. The ad compares the phenomenal speed of the ‘world’s fastest man’, Usain Bolt, with that of Telkom’s fibre to home products.

The billboard boasts some 4.2 tons of LED material, and was manufactured by the world’s premier LED manufacturer, Daktronics, who supplied many of the LED screens for the Olympics and the 2010 FIFA World Cup.

“‘Ownable Digital’ is a key part of Telkom’s out of home strategy and we’ve been working hard on driving digital outdoor innovation with Primedia Outdoor, in particular,” says Norman Gibson, strategic director at Mediacom. “The N1 Rivonia site delivers on all key metrics, including high traffic volumes in the right area on a key highway in Johannesburg.”

“As the leading broadband service provider in SA, using digital media to communicate our products and services just makes sense. Being the exclusive advertiser on these sites allows us to communicate multiple messages cost-effectively, since there is no additional cost for any additional creative changes.” 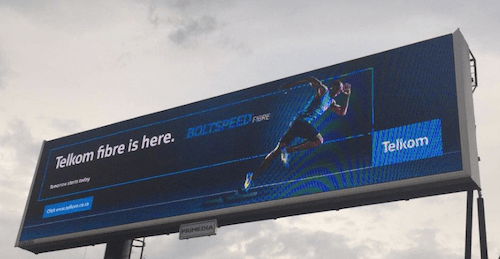