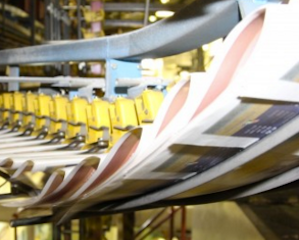 Print and media group Caxton & CTP Publishers and Printers on Tuesday warned that it would be difficult for the company to maintain earnings over the next few years as difficult trading conditions are likely to become even more challenging.

With the economy slowing and consumers not spending as freely, Caxton was only able to grow revenues by 0.9% for the six months to the end of December 2015. An increase in input costs and staff expenses saw profit for the period decline by 5.4%.

“The period under review has been characterised by reduced growth, slowing consumer spending and recent volatility in the exchange rate,” the company said in a statement. “These conditions contributed to difficult trading conditions that intensified towards the end of the year resulting in a decline in earnings.”

Its publishing, printing and distribution division continued to contribute the bulk of profits, at R192.8 million. However, this was a slight decrease from the R204.5 million it generated in 2014.

Caxton noted that there was at least some room for optimism in the resilience shown by its local newspaper offerings. “Although the daily and weekly newspaper industry continues to experience declining circulations and advertising revenues our group is fortunate that the local newspapers have bucked this trend and managed to show a slight growth in turnover,” the company said. “This has meant that the newspaper publishing division has managed to maintain profitability.”

The company’s packaging division grew profits from R75.0 million in 2014 to R84.7 million for the period under review. However, Caxton was cautious about its prospects for the next six months as a weaker rand will increase input costs and demand is uncertain.

“The packaging divisions performed reasonably in the face of increasingly difficult trading conditions led by competitor activity and pressure on margins,” it noted. “The period under review was positively impacted by some major customers pulling orders forward for operational reasons and in some cases demand increased as alternative suppliers could not meet customer requirements. The second half of the financial year is expected to be increasingly difficult as the full impact of the weakened exchange rate and also lost business is felt.”

Overall, Caxton believes that it will continue to face major challenges in the local operating environment. However, with cash on hand of R1.7 billion, it may be in a position to look for acquisition opportunities as other businesses will be facing the same pressures.

“The current difficult trading conditions are expected to worsen in South Africa and become increasingly difficult, impacted by the economy’s declining growth prospects and a volatile exchange rate,” Caxton said. “Against this background it will be difficult to maintain earnings in the medium term, although the group is in an enviable position relative to the market, with a strong balance sheet which will enable it to take advantage of any opportunities that may arise in our sectors, as conditions continue to deteriorate.”