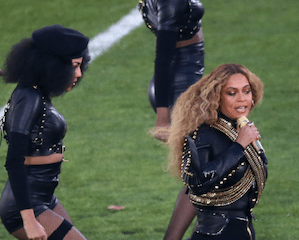 Race is very much on my mind at the moment as I visit the US.

As a black British academic, my attention is drawn to daily news reports about racism and suffering at the hands of the police, even for minor infractions such as parking ticket violations and speeding.

I am also conscious of the absence of other black bodies when I visit beaches, tourist sites and restaurants in “nice” areas, and yet their heavy presence among the homeless sleeping under freeway bridges.

And as I’m researching the global beauty industry, I’m also interested in the very explicitly racialised marketing of cosmetic surgery procedures in the US. So I was gripped by Beyoncé’s performance of her new single, Formation, at this year’s Super Bowl, and by the reactions that it provoked.

Here was an affirmation of black beauty and political power, live on prime time TV. It brought race into the living rooms of many white Americans for one-and-a-half minutes. And in a way that was discomforting for some, as she appeared to be taking pride in her blackness.

Beyoncé sang about loving her “negro nose” and her baby’s afro hair. Her dancers, dressed as highly sexualised Black Panthers, reminded the audience of the ongoing history of police killings of black Americans by holding up a sign calling for justice for Mario Woods.

For some white commentators, the performance was too political, and even disrespectful of the police. But it has also raised more complicated questions. It has reinvigorated debates on the extent to which Beyoncé herself is complicit in the valorisation of whiteness.

Some feel Beyoncé has managed to stay at the top of her game because her hybrid looks (such as light skin and long hair) and popular music mean white audiences have not pigeonholed her as a “black” artist. They can therefore enjoy her music without feeling they are making a statement about race. For white people, being a Beyoncé fan is a comfortably “colour-blind” experience.

Got hair dye in my bag, swag

But this time she was picked up on the race radar. And this has caused controversy among black, as well as white commentators. The colour of her hair commanded particular attention. It has been gradually lightening over time to what, at the time of the Super Bowl, stood out as starkly blonde in contrast to the dozens of dancers who surrounded her. They all had their hair black or dark brown, and in afros.

So is Beyoncé saying that blonde is best? Or is she implying that black women can just wear their hair how they want without it being a statement? Is she telling us that there is a wide range of different possible looks in the black beauty box?

These questions should remind us that blackness is itself a political category. There’s no such thing as “race”; the human beings who get put in the “black box” are not physically or characteristically homogeneous. Beyoncé is light skinned, her daughter is dark skinned, and the chances are she has people in her family right across the dark to light-skinned colour spectrum, just as I and many other black people do.

Whether we call it colourism, pigmentocracy or colour hierarchy, this obsession with skin tone is a powerful force in racist societies. And it has created divisions within the black community too – divisions that often go unacknowledged, but which always underpin judgements about female beauty.

What white racist societies reproduce is the assumption that all black people look alike, and that what is assumed to make them alike is the opposite of beautiful: darker skin, kinky hair, wider noses, fuller lips.

Getting in formation. EPA/Tony Avelar

For women, to be beautiful is to be socially marked as black without having these features. This is known and exploited by the global beauty industry, which markets skin lightening and hair straightening products in black media.

There is also an expansion of cosmetic surgeons selling “racially enhancing” cosmetic procedures that are said to improve appearance and beautify by subtly narrowing noses and lips.

A person’s public mask matters in America. For black Americans, managing the mask in such a way as to be black and yet “not ugly” and “not dangerous” is a full time job. For women, straightening naturally curly hair is acceptable, if not required. But dying their naturally dark hair blonde, or using skin lightening products, is more likely to provoke a negative reaction and accusations of not taking pride in what is – supposedly – essential to being black.

At the Super Bowl, Beyoncé drew attention to many of the ambiguities of race in contemporary America. She is a rich woman, with naturally light skin, and seemingly long blonde hair – characteristics usually associated with whiteness – who is apparently embracing black beauty and power. And though her performance referenced a black political movement of the 1960s and 70s, it was extremely timely.

There is growing recognition that large segments of the black population in the US, no matter what the tone of their skin, still live under the shadow cast by the country’s history of racial slavery. Despite even the concrete achievements of the civil rights movement, white privilege remains undented and large numbers of black Americans are excluded from political, economic and social power.

Beyoncé is not a political theorist or a political activist. She is no Nina Simone, and the lyrics of the song at the heart of the controversy are pretty trivial. But she knows how to use visual media to make people who wouldn’t normally be interested in questions about what blackness means sit up and take notice. Good artists don’t have to provide the solutions to the problems they reflect, express or embody. They simply have to make the audience think.