LATEST NEWS
Home Agencies Media agency Should there be rugby on SABC?

Should there be rugby on SABC? 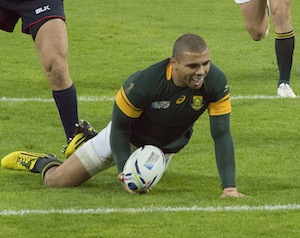 Should there be rugby on SABC? I think most of us would answer ‘yes’. SABC is the national broadcaster after all and the game of rugby is interwoven into the lives of a great many South Africans. It should therefore be made available to as many of the country’s populace as possible.

Rugby sits almost exclusively on the DStv Premium platform, including everything from local schools rugby all the way up to the national squad. There’s a very good reason for this, DStv pays vast sums of money to broadcast the game in South Africa. It’s one of the key drivers of sales for their premium bouquet and focus group after focus group consistently confirms “I would cancel my subscription if it wasn’t for the rugby”.

It therefore makes perfect business sense to hold onto the rights tightly. But we have to ask ourselves, is the lack of broadcast on SABC channels not hampering the transformation of the game? Transformation in Rugby is a very complex issue and there is no silver bullet that would instantly solve it.

A lot of work needs to be done at grass roots levels all the way up to elite level in order to address it but I would argue that providing access to the game and the viewing thereof, would go a long way towards popularising it with the black youth of this country. The more one watches and engages with a sport, the more you understand it and the more likely you are to fall in love with it and even play it.

During last year’s Rugby World Cup, the SABC had the rare opportunity of broadcasting world class rugby to each and every South African with a television set. The response was overwhelming.

Overall viewership figures were great; in fact they far exceeded those of DStv! The most viewed game was the semi-final between South Africa and New Zealand, which reached a total of 3.2 million viewers aged 18+. Of these viewers, 2.1 million were black. In comparison, the black DStv 18+ audience was just 110 000 people (DStv-i). And it didn’t stop there; games across the spectrum showed great SABC viewership figures. 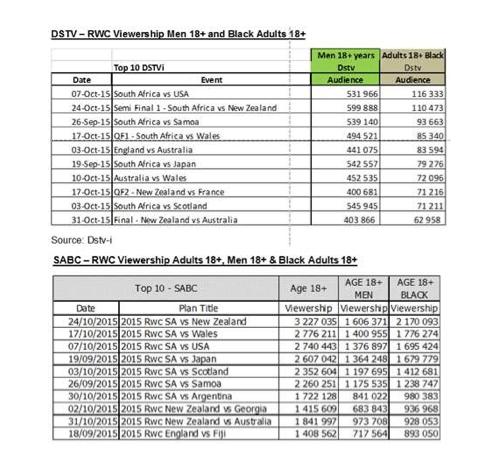 This proves that there is a real hunger within the market for this kind of content but as long as it is kept hidden behind a paywall it will sadly remain a sport played and watched by a select demographic. According to AMPS Jul 14 – Jun 15 there are six million SABC viewers who are interested in rugby, compared to just 3.3m DStv viewers who state the same.

Ultimately more access to the game can only be good for the game, and for the country too!

Marino Sigalas is a media planner at The MediaShop.