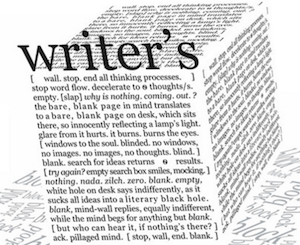 Writer’s Block. Been rolling the term around in my skull lately, think I’ve just about decided it’s wholly spurious. Some concept someone (probably not a writer) made up way back when that’s stuck with us, dogged us. Haunted some of us.

We’ve all experienced it, haven’t we?  The day that you sit down to the computer, pop open the lid, open your partially-completed article, and stare at the cursor blinking, blinking, blinking. The words do not come; the content feels cold; the flow seems dead on its feet.

Well, perhaps not. Look, I’m not suggesting writers who allegedly suffer from this malady are lying, or exaggerating, or concocting armchair justifications for any temporary lapses in production they may experience. I’m simply suggesting that writer’s block isn’t what most people think it is; it’s not some temporary mental wedging or a disorder that writers acquire, struggle through and somehow get over. Instead, this apocryphal condition is the result of a universal, ever-present hiccough in an otherwise complex piece of mental machinery. And you just have to get over it.

“There is nothing to writing, all you do is sit down at a typewriter and bleed.” – Ernest Hemingway

Here’s proof. Have you ever noticed that when you’re called to critique a friend or colleague’s work, you have all the answers, a crystal-clear idea of how you’d do things differently? Most of us familiar with this activity regularly return articles lashed with red ink, and Lord knows if someone writes something on the internet we don’t like we can rise to the task of appending the offending article with paragraphs of critical response.

However, have you similarly noticed that when you sit down to compose something you’ve been mulling over for months, suddenly your brain slips off the rails and your creative output decelerates to a death rattle? And when you finally do begin writing, your mind picks these moments as an opportunity to spit out a laundry list of every nearby distraction possible?

For most of us (the right-handed portion of the population, anyway) the left lobe is our logical side: it stores rule-abiding maxims and decodes patterns we gather empirically in the world around us. Because this side of the brain studies behaviours, it’s your most “responsible side”; it knows you’re supposed to be writing instead of obsessively cleaning the lint catcher or refilling the ice-cube trays.

Then there’s the right side of the brain, which for the duration of your life has been taking personal experiences and turning them into creative works, often bubbling to the surface only when you dream. This is the celebrated part of your brain, the part that makes you uniquely “you.” It just so happens this is also the part of you that wants you to do anything but work. It doesn’t like the rules and it absolutely hates responsibilities, namely because it doesn’t know what responsibilities are.

The good news here is that your creative speed-bumps aren’t necessarily the result of garden-variety laziness, but are more likely due to an evolutionary flub in our collective intracranial physiology. The bad news is that the revered, creative side of your brain has the habit of acting like a petulant child — and right now it’s ruining your life.

“A bad book is as much labour to write as a good one, it comes as sincerely from the author’s soul.” – Aldous Huxley

On the other hand, your ‘block’ could be something more personal…

Think of a bathroom sink.

Now, if you don’t continually clean your sink, after a while, without you realising it, stuff starts to get stuck in the drain: hair, trash, hair products, etc. Little by little all this stuff begins to add up, and suddenly, every time you go to use the sink, it takes longer and longer for the water to flow down into the drain. When your bathroom sink is clogged this makes doing simple tasks—like shaving, brushing your teeth, or combing your hair—all the more arduous. Therefore, the more you avoid unclogging your sink, the whole lot messier it gets for you every single morning when you have to get ready for your day.

Now, let’s imagine that this bathroom sink is you, and that ‘clogged drain’ is your block.

At one point in your life, probably without realising it, you began to avoid taking proper care yourself. For instance: you may have experienced several things in your life that you did not fully process when they first came up: a nasty break up, a loss of a job, a loss of faith, a family relationship that went awry—whatever it was it, it was not addressed (or processed) when it first came up and so it ended up causing a block in your system. Instead of making it all the way through you, that piece of unprocessed emotions, psychological baggage, or numbed spiritual signals got stuck in you; and because it got stuck in you, it is now blocking you from your full potential.

You, like that sink in our analogy, can no longer process things as quickly and as effectively as you used to. You cannot adequately get rid of all the “trash” that is starting to accumulate in your drain, and therefore you are stuck. What is supposed to flow very naturally through you now has a lot of trouble doing so. As a result, this makes day-to-day activities harder for you to execute.

“I learned never to empty the well of my writing, but to stop when there was still something there in the deep part of the well, and let it refill at night from the springs that fed it.” – Ernest Hemingway

There are a few tricks you can use to juke the creative process, or at least keep damage at a minimum when the creative well appears dry.

Just start writing
This sounds so simple because it is. Set a timer and force yourself to write. No social media. No emails. No phone calls. No pondering for too long. No editing, correcting or formatting. Just let the words flow and don’t stop. I find that by forcing myself to write without distractions or editing, I’m more open to ideas and connections (as I don’t overthink what I know).

If you’re just in a funk (and it happens) give yourself an hour or so off. Read a favourite novel, watch a movie, go for a walk… get inspiration from the world around you.

Assuming you’re not going to miss your deadline, do what you need to do to remove distractions. When you do, your brain will be unencumbered and free to produce awesome copy.

Give yourself a pep talk

Ask yourself a question. Like, “Have I got this?” Then tell yourself why you do. You’re reminding yourself of all the reasons you have to feel confident and preparing yourself to be awesome.

If the client booked you, they did so for a reason. So go and prove them right.

Don’t take yourself so seriously
No one’s life hangs in the balance. I hope! It’s just writing. Take a breath, make a coffee and remember that this is just the first draft. Everything builds from here.

“Introvert conversations are like jazz. Each player gets to solo for a nice stretch before the other player comes in does his solo” – Laurie Helgoe

Writer’s block – the two wretched words that irks any writer in distress and changes their hair follicles to a snow white colour – is nothing more than the side effect of a preconception many writers have that everything that comes off their pens should be earth-shatteringly brilliant.

This is a grossly unreasonable expectation to set for yourself, and the result of a loophole concocted by right-lobe bureaucracy to prevent you from working. You’ve essentially accepted that you temporarily don’t possess the wherewithal to produce any new creative ideas, so once again you’ve given yourself permission to get up from that chair. You’ve got to reconcile with yourself that everything gets better with time. And the only way to get past those rocky beginnings and develop and improve upon your ideas is through work, work, work.