LATEST NEWS
Home Digital Online Tax clock: Working for the man, and yourself

Tax clock: Working for the man, and yourself 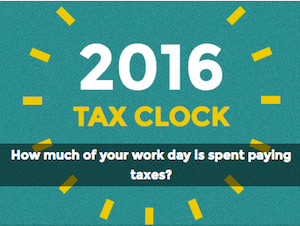 For taxpayers, the most anticipated part of Pravin Gordhan’s 2016 Budget Speech was whether income tax would be increased or decreased.

Taxpayers would also be very interested in how much the income tax increased or decreased. But paying taxes is not just about you, it’s also about the country.

When you’re putting in long hours at work, you’re not just working for yourself.

The fact is that unless you’re ducking and diving and breaking the law, you’re also working to pay your share of taxes that help keep the country running.

But what are you actually paying for?

The Tax Clock, an online tool developed by Code for South Africa, a civic tech organisation that promotes informed decision-making for positive social change, offers an interesting view of your tax contribution.

It calculates minute-by-minute the time you spend contributing to government services, such as education, health or national debt – and the time that you’re working for yourself.

Adi Eyal, Director of Code for South Africa, says the Tax Clock is an opportunity for people to engage with the budget through the money they earn – and the tax they pay.

“When the budget comes out, people are usually only interested in how much they will be paying and if there are any rebates they can get. But they don’t engage with what the budget is really about,” he said.

“The budget is a statement of intent by government that says what our priorities are, and what we are going to spend your money on. So it’s important for people to understand what they are working for. The Tax Clock will show them how they have contributed toward things like education or helped pay off national debt in a day.”

“The rationale behind the tool is essentially that we’re exploring how you take complex data and present it to people in a way that they can understand.

“And so most people don’t understand the budget and how it affects them, but if we put it in terms of their own salaries, how long they work, it helps them understand that, for instance, we spend almost as much on interest repayments as we do on social services in this country.”