LATEST NEWS
Home Press Newspapers The death of newspapers – have we reached the tipping point?

The death of newspapers – have we reached the tipping point? 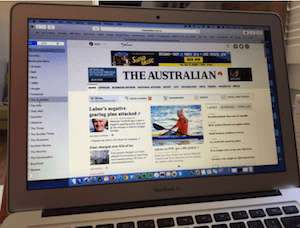 In a 2013 Monthly essay Eric Beecher warned of a looming “civic catastrophe” for Australia if the decline of newspapers continued as it had been in the preceding years.

The Australian’s report on a Fairfax plan to dump print and go digital-only, as yet unimplemented but convincingly detailed in the leaked 2013 document prepared by management consultancy firm Bain & Co, suggests that such a move is, if not a certainty, highly probable in the foreseeable future.

News Corp’s only substantial competitor in the print journalism sector may be on the brink of giving up the ghost, as has long been speculated even by its natural supporters such as Beecher. If it does, hundreds more jobs will go, along with the many hundreds of experienced, skilled journalists and editors already shown the door by the company.

All of this comes in the wake of the UK Independent’s announcement last week of a move to an exclusively digital publication. As with Fairfax, calamitous declines in print circulation at the Indy – a poster title for innovation and editorial independence in days long gone – have made such a move entirely rational from the financial perspective of its Russian proprietor.

Many newspapers in the US have made the transition from print to digital, in the hope of fixing the broken business models of the analogue age.

Many of us have already given up on newspapers, and won’t miss print if indeed it dies out as a mass media platform. We access our news on iPads, or mobile phones, or laptops, and find ourselves turning actual, real pages to read our journalism only in those rare – and becoming rarer all the time – situations where there is no internet access.

And by those digital means of communication and sharing, we have access to more news and journalism than any previous generation ever did. I read more news, not less, because of the online revolution.

Also, I read the news from the UK, the US, indeed from wherever in the world I choose, just as easily as I could once buy the print edition of The Guardian in my old home town of Glasgow. More easily, since I don’t even have to leave the house to enter the globalised public sphere of fact-based content available to me and every other human being on the planet with access to an internet connection and a networked device.

My problem now is not that of accessing quality journalism – as many pessimists predicted it would become as a result of news industry turmoil – but how to filter and sift through the vast quantity of journalism which is available to me from around the globe on an hourly and daily basis, so that I can manage the flow of useful information and make some sense of the world.

Fairfax’s newspapers may be dying, then, like those of The Independent and other companies which through bad management and poor decision-making blew the digital challenge. But news and journalism thrive as never before.

Returning to Beecher’s dire warnings of “civic catastrophe”, will we miss newspapers when they finally disappear?

Someone once cheekily speculated that, on current circulation trends, the death of newspapers would come sometime in the first quarter of 2034. Personally, I believe that print will survive as a niche medium, like vinyl records, for as long as there is a demand for the tactility of words stamped on dead trees. And for a long time yet there will be those who refuse to join the online era, or who cannot for various reasons.

And there will be content for which, for one reason or another, online dissemination is not optimal, or which does not need the internet to circulate. Print continues to expand in media markets such as India and many African countries, where digital infrastructure and online culture remain underdeveloped. Paper has its place, and will keep it for a while yet.

And as long as the resources and professional values required for what we think of as “quality” journalism make the transition to digital platforms, then we have little to fear from the death of newspapers in themselves.

It was Rupert Murdoch who declared something to the effect that “we are not in the business of printing words on dead trees”. Content is king, and newsprint is just a carrier medium, now passing into history like hot metal presses and lithographs before it. Journalistic content can be produced to just as high an editorial standard online as off, and the fetishisation of print misses the point.

The real concern about the future of Fairfax and other dysfunctional former print behemoths – as articulated by Beecher in his 2013 essay – is that in their rush to maximise profits they abandon this thing we call “quality” journalism, and the journalists required to produce it, to the detriment of the diversity and independence of Australia’s political culture.

New digital entrants such as the Guardian Australia, Daily Mail Australia and The Conversation, or local editions of Gawker and Buzzfeed, are picking up some of the slack created by an already hollowed-out Fairfax. But the domination of News Corp’s titles in the Australian news media environment can only become more pronounced if Fairfax’s decline continues to the point where its print titles disappear entirely.

The Murdoch empire has invested more, and adapted better to the digital challenge than its main competitor. It deserves credit for that. But it cannot be in the interests of Australian democracy that any private proprietor – left, right or neutral – should be so editorially dominant as News will become if Fairfax disappears as a significant news producer.

The death of Fairfax as a serious producer of journalism, should that outcome transpire, will undoubtedly leave a gap in the Australian public sphere; what we might call a “diversity deficit”. A major question for Australian civil society in the coming years will be how to fill that gap and ensure the survival of healthy media pluralism.