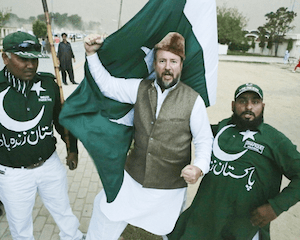 Shane Smith, the Founder and CEO of VICE has been named as the Cannes Lions 2016 Media Person of the Year.

Introduced in 1999, the Media Person of the Year Award recognises innovators who have shaped the future of media. And it seems no one is more deserving of the award than Smith.

“Shane is an influential figure in today’s media landscape. Not only is he responsible for taking VICE, which started life as a punk magazine, and expanding it to become the world’s leading global youth media company, but also, beyond this, he’s a critically acclaimed journalist,” says Philip Thomas, CEO of Lions Festivals, explaining why Smith cracked the nod.

Thomas added, “Shane is a producer of Emmy, Peabody, and National Magazine Award-winning content, recognised not just for helping to reinvent the news documentary style, but for helping to present complicated and urgent subjects like the environment and criminal justice in fresh, accessible terms. As a man of great talent, diversity and unstoppable drive, Shane’s a very worthy recipient of this accolade.”

Most recently, Smith has struck deals with leading platforms across mobile, digital and linear to syndicate VICE’s award-winning video to viewers everywhere. But there is one worrying stat in the VICE Media stable Smith may be concerned about. Stats released by Comscore for February showed that web traffic for VICE Media plummeted 17.4% month on month to 49.1 million unique visitors. While this is still an impressive number the drop, from 59.5 million in January, displays a controversial way of reporting reach.

According to Andrew Wallenstein,  co-editor in chief of Variety, that number is a combination of VICE’s own website and a group of other Web properties that VICE doesn’t own or operate. Comscore allows this arrangement as one publisher can sign away its audience to another publisher through a document known as a traffic assignment letter. Wallenstein says that it’s not just VICE that uses this reporting technique, but a host of other digital publishers as well.

Smith is also a critically acclaimed journalist and the host and executive producer for the Emmy Award-winning news series, VICE, on HBO. Smith has reported from the world’s most isolated and difficult places, including North Korea, Iran, Afghanistan, Kashmir, Liberia and Greenland.

Commenting on the award, Smith said, “When I was a young man one of my great joys was to go to my local repertory theatre and watch the feature film of the best of Cannes Lions awards. To see the funny, salacious and over the top commercials from around the world offered a window into a different and tantalising dimension to a teenager living in snowy Canada. As such, to accept the award for Cannes Lions Media Person of the Year is simultaneously humbling and immensely pleasurable because although you don’t get into the business to win hardware, it sure makes life a lot more fun when you do.”

Smith will receive his award during the Awards Ceremony of the Cannes Lions International Festival of Creativity on Wednesday 22 June 2016.

Cannes Lions is an eight-day Festival and Awards event celebrating creative excellence across all forms of brand communications. It will run from 18-25 June in Cannes, France.