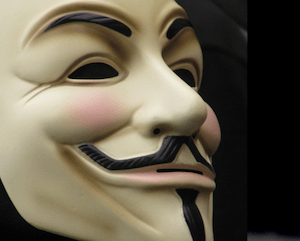 When Anonymous declared “total war” on Donald Trump in early March, the hacktivist group set a countdown clock, calling on “everyone to target Trump websites”.

Targeting Trump was to happen on April 1. But that may not have been its real objective.

Regardless of what, if anything, is planned for April 1, the actual attack may have already happened. That’s because the hack appears to be not of any website or technology but rather of Trump himself.

By exploiting Trump’s quick-trigger tendencies to attack and destroy his rivals – including by threatening police action – Anonymous is seeking to tear down not his personal privacy, but something much more sacred to him: his brand.

On March 17, the group published Trump’s Social Security and cellphone numbers. Trump’s response was swift and sharp: his campaign issued a statement demanding the immediate arrest of those behind the release. The Secret Service – which has been protecting Trump since November 2015 – and the FBI both announced they were investigating.

My research into Anonymous, its goals and its tactics, suggests that provoking just such an aggressive response, including the involvement of multiple law enforcement agencies, may have been the actual goal of the Anonymous effort.

As a spokesman in an ever-grinning mask would soon reveal, those “private” details of the billionaire-turned-presidential-candidate were already public – they had been available online since 2013. “Trump want[s] to turn America into a fascist dictatorship where anyone can be arrested for just posting old information online,” the hacktivists contended.

This bait-and-switch tactic of issuing a technological threat and then playing a non-technical trick on Trump may seem like a departure from traditional hacktivist methods. After all, Anonymous is best known for digital actions, including actually stealing private information, defacing websites and, most destructively, distributed denial of service (DDoS) attacks, in which a deluge of well-coordinated web traffic forces a website to shut down.

Some see a contradiction in this group that champions free speech while effectively silencing that of their enemies. However, a close look at Anonymous reveals that its overall aim is not technological in nature, but rather societal: to pull the curtain back on their adversaries and force the public to look. Most hacktivist “#operations” are backed by a clear mission statement, protesting issues as diverse as whale-hunting and unlawful incarcerations around the globe.

Their tactics reflect this drive for social change. Journalist Andres Jauregui likened one Anonymous method, DDoS, to a civil disobedience strategy employed by student activists in the 1960s: “Clog the hallway of a government office with enough people, and it effectively ceases to function; direct enough traffic to a website, and the same thing happens.” But that is not how the media portray the group.

My 2015 news analysis found that most journalists frame Anonymous as “malicious pranksters” whose missions are broadly tantamount to tying the enemy’s shoelaces together and running away. The next most frequent characterisation used more ominous terms, painting Anonymous as a global threat much like the movie character in the Guy Fawkes mask who gleefully plotted the demise of world order.

By eliciting such a forceful and police-centric response, Anonymous is highlighting its basis in protest. The group is making the political suggestion that rather than being viewed as the political outsider of this election season, Trump represents a brand of totalitarianism that will aim establishment power at whatever target he directs. Like his personal information, Anonymous seems to say, Trump’s true nature is already visible to the public.

My research also found that 78 percent of Anonymous’ targets belonged to one of the following categories: government agencies, corporations and media empires – a tripartite of corrupted establishments, according to hacktivists. To Trump supporters, the rogue Republican candidate would seem an odd choice to add to that list.

Indeed, poll after poll has shown that Trump supporters choose him because he is the antiestablishment candidate who answers to no corporate sponsor, media outlet or political party agenda.

But Anonymous’ declaration of “war” on Donald Trump may not really be the establishment-threatening assault suggested by “V for Vendetta.“ Rather, it appears to be an attack in the spirit of conning a con man, as in “The Sting.”

Based on the group’s previous actions, we can then speculate that Anonymous’ goal is to show that Trump is the quintessential autocrat in the making. When he promises a “deportation force” to round up illegal immigrants, or threatens to expose sensitive information on his political enemies or their wives, and even when he calls on everyone to “boycott Starbucks” for allegedly removing Christmas from their cups, he is directly raising the specter of Anonymous’ Orwellian nightmare.

Whether or not Anonymous succeeds in dismantling, or even tries to attack Donald Trump’s websites on April Fools’ Day is probably irrelevant. By cleverly goading Trump into calling for a law enforcement response against people who have only distributed already-public information, Anonymous has already begun to undermine his anti-establishment brand. That’s a pretty good trick.