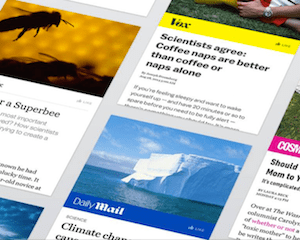 Google and Facebook have locked horns in the race to speed up the mobile web for publishers in order to take a dominant position in how news content is distributed online. With Google’s Accelerated Mobile Pages (AMP) and Facebook’s Instant Articles vying to make reading news stories easier and faster online, and specifically on mobile, how should publishers approach these opportunities?

The question is not over whether or not to join the platforms, but rather how. In the same way that a circulation manager would have single copy boxes at the busiest intersections in a given market, so should editorial teams create outlets on the busiest destinations online.

We publishers must be aware of and understand the opportunities and define our editorial strategies around serving our audiences content where they want to consume our stories while maintaining control over our unique brand voice and loyal audiences in the future.

Facebook’s new Instant Articles feature is an attempt to accelerate the display of news content on smartphones. They describe their product as, “An HTML5 document optimised for fast mobile performance, rich storytelling capabilities, branded design and customized visual display.”

Building an Instant Article does not automatically create a corresponding Facebook post. It is a separate tool meant to enhance your article once someone shares it on Facebook. It simply means that any time a reader on a mobile device is directed to the article’s URL on Facebook, the link will be displayed as an Instant Article.

In the Instant Articles program, publishers can sell and serve their own display advertisements and keep 100% of the revenue, or they can monetize unsold inventory with display ads from Facebook’s Audience Network.

While first statistics from partners in the program show that articles presented in this format get shared more often on Facebook than standard link-based news, independent research in Germany has shown a much less clear impact.

Another foreseeable benefit of Instant Articles is that it is harder to block ads in the Facebook app than on the browser, so there should be some refuge for display ads with this product.

Facebook has become one of the most important drivers of traffic for publishers and no one would argue that having a strong presence on Facebook isn’t a vital place to engage with our readers. So, adopting Instant Articles should be an improvement on something that already works.

However, in adopting the new format, publishers might cost themselves a significant amount of traffic to their own site. Worse yet, Facebook could adjust their algorithms at any time to favour Instant Articles over links to a publisher’s site.

So while they are enabling you in the short run, you may be giving up a good deal of control in the future. They are offering performance enhancements as a way to further entrench their walled garden into the global news ecosystem.

Just like all web pages, Accelerated Mobile Pages will load in any modern browser or app webview. The goal is not to homogenize how content looks and feels, but instead to build a more common technical core between pages that speeds up load times.

Under this type of framework, publishers continue to control their content, but platforms can easily cache or mirror the content for optimal delivery speed to users. Google has stated that it will provide a cache that can be used by anyone at no cost, and all AMPs will be cached by Google’s cache.

The goal is that the combination of limited technical functionality with a distribution system built around caching will lead to better performing pages, and increased audience development for publishers.

Google has long struggled to compete in the social space. Google+ is more or less on its way out, having failed to attract a robust user base, and Google is in fierce competition with Facebook for the very large and growing mobile advertising market. This means that while Google AMP looks on the surface as simply a technology play that intends to accelerate mobile web content, it is directly aimed at Facebook’s Instant Article feature.

How and how deeply Google AMP will be implemented within large publishers is still an open question. There is however little doubt that AMP is going to play a major role in content distribution.

The necessity of driving traffic back to a publisher’s core website or app should not be dismissed since it is a key way that publishers will maintain control of their brand into the future.

That being said, Google’s solution maintains the highest degree of control for the publisher, while Facebook’s solution most likely offers the best increase in engagement and protection from increasing mobile ad blocking. Neither of these tools will be journalism’s digital savior, but Facebook’s efforts will increase discoverability and Google’s will support brand loyalty for those who act.

Publishers must focus on their core audiences, choose which platforms that they are most likely to be on, create content that plays well on a given platform, all while simultaneously focusing on creating loyal and engaged subscribers on their owned and operated platforms.

The fragmentation of platforms is only beginning and with the rise of dark social, or messaging apps that allow for private-group social networking, publishers will need a clear platform distribution strategy.

Publishers should take advantage of the race between Google and Facebook to position themselves and their editorial voice in such a way that saves as much control as possible in the coming rapid fragmentation.

WAN-IFRA is covering the topic of distributed content in detail this year. For more details, click here

This article first appeared in the Spring 2016 Special Issue of News & Tech.