So women are from Venus and men are from Mars, right? Maybe and maybe not, especially when it comes to media consumption!

How different are we then – men and women – when it comes to what we watch and what we read.

I’ve often heard assumptions about what men read and watch like “men definitely don’t watch soapies and dramas, only the news and sports” or “women aren’t really interested in sports and the news. They spend all their time watching soapies.”

Really? I find it fascinating, especially when looking at the difference between common opinions and what the reality is.

Let’s first look at TV, because we can see what’s happening with the genders, at programme level.

The above table definitely blows popular perceptions out of the water. Women show higher AR’s than Men when it comes to the News! The Xhosa and Zulu News bulletin are the preference for both sexes.

And again the trend continues with the above figures not being too different after all and follows very similar patterns as the top programme list shown above.

How about reality shows? Here too there is a similarity with regards to preferred shows and the sexes. The trend continues with sitcoms, soapies and sport programmes below. 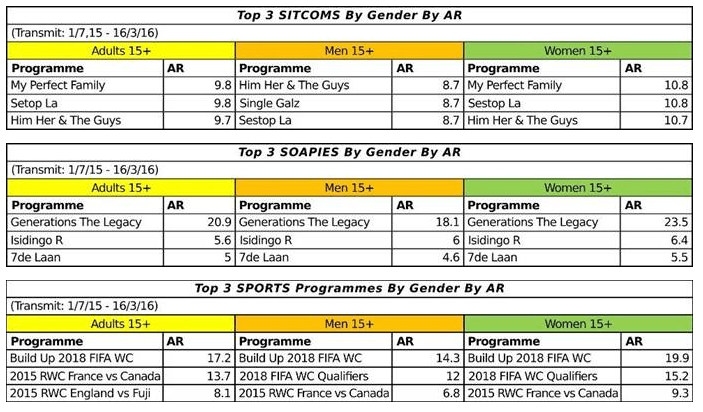 Men don’t read celeb mags? Oh yes, they do! You, Huisgenoot and Drum are in the top five for both genders. The differences come in the form of the sports mags (and in particular, football) for the men – but other than that, we can safely say that when it comes to media consumption we tend to live on the same planet and are watching and reading similar content.

The only correct assumption made was that more men read newspapers than women do, but, did you know, they also read more magazines than women do? The point of the exercise is to never assume that you know what people’s media consumption habits are. Just because you watch Carte Blanche religiously every Sunday night, doesn’t mean that that the rest of the population is too. Or do they?

Belinda Kayton is a media strategist at The MediaShop. This story was first published in the company newsletter, ShopTalk.