Hubris, ego and suicide: Why news media MUST deal with tech giants 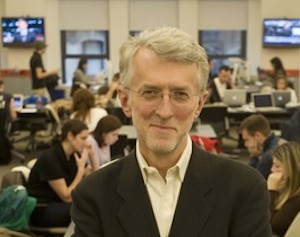 Are third party platforms the new publishers and does that signal the end of journalism? In an interview with the World Editors Forum, Jeff Jarvis tells how publishers should be working with, not against, platforms.

Emily Bell, director of the Tow Centre for Digital Journalism at Columbia Journalism School, recently gave an apocalyptic speech at Oxford University about the “end of journalism as we know it”. In particular, she highlighted how technology companies are now publishers and should live up to publisher responsibilities.

Jeff Jarvis, professor of journalism and director of the Tow-Knight Centre for Entrepreneurial Journalism at the City University of New York, had a different view.

What are your thoughts on Emily Bell’s speech?

I have immense respect for Emily and I disagree with her at my peril. I think it’s a misnomer to call Facebook social media. We tend to call anyone who approaches what we do – putting words on a page, selling attention and so on – as media, because we see the world God-like in our image.

First and foremost, it’s not Facebook we are dealing with; it’s the people who are on it. If we vow to serve the public, then we must go to where the public is, whether that’s Facebook, WhatsApp or Snapchat or whatever platform to come. We can no longer have the hubris to think or assume that people will come to us as a destination. So in that then, we have to understand how our relationship can be with companies such as Facebook and Google.

Though I disagree with the strategies and tactics of some European publishers of declaring war on Silicon Valley, which I actually think harms Europe, nonetheless, I have to give them credit because they brought Google to the table and now we have Digital News Initiatives and Instant Articles. However, I still see a huge gulf of misunderstanding.

When I go to publishers and say let’s get some data out of Facebook, you will always hear them say: ‘Oh, they will never give it to us.’ But will you ask? Have you tried? You just presume they are the enemy. When I go and ask Google and Facebook, in all candor, they said, ‘Even if we give you the data, you won’t know how to use it,’ and they are not wrong. I said to them, ‘Then teach us, if you care about the news, then help us make better news products for the public.’ ”

I absolutely think we need to deal with platforms. Yes, we are going to disagree about things. Facebook’s first goal is to connect people and keep them entertained, not informed. We have different missions but that does not mean they are not compatible, it’s just different priorities. Google’s mission is to organise the world’s information and make them available. That certainly should be compatible with our mission. If we get past the misunderstanding, there are many things of mutual interest.

How would you respond to the fact that these companies actually control people’s content consumption?

Facebook’s company policy is that we don’t decide what you see, it’s your choices that do and that’s pretty disingenuous I would say. But Facebook says they are a platform, not a publisher, and I agree with that. They are a fairly open platform and Instant Articles allow us to use their platform to reach people.

When we talk about algorithms which are not transparent, we need to ask ourselves what we are asking for. We know full well that if Facebook and Google make their algorithm transparent, they will be gamed by not only spammers but also by us.

In order to feed our mass media volume based business model, we have shown in our history of trying to manipulate people through Search Engine Optimisation, cat videos and clickbait headlines, so we are hardly blameless.

So what is it exactly are we asking Facebook for? I can image that we could ask Facebook for an allocation of attention. If they would trust us as editors, that there are things people ought to know, then give us the chance to present that before them. If the audience doesn’t like it, then it’s when Facebook gives us data would be helpful, which can help us serve people that are on Facebook better and, in turn, help them retain their customers.

This is a conversation that I think has to occur. It’s not as simplistic as saying, oh we can’t deal with Facebook because they are in control, which we used to be and we should continue to be. God granted us that right and we are fearful that Facebook is going to pull the trigger on us, so we won’t deal with it. That’s hubris, that’s ego, that’s suicide.

But they have tremendous power over us and that does not put us on equal footing when we work with them?

It’s pretty whiny of us to say that when we have held huge power for a century in our industry; I own the printing press, I get to say what goes on and I have pricing power. This is the point I want to make: is there a danger of distribution in the hands of few? If you say Google and Facebook are the few, then yes there are fewer. However, we must acknowledge that the distribution of news has always been in few hands. In some cities, it’s been a monopoly.

Secondly, and more importantly, Google, Facebook, Twitter and many other technology companies actually enabled billions of people to speak and be heard, people who never could have spoken or been heard under our system. And so no, news is not in fewer hands, news is in many, many more hands.

Have we slacked in reporting on their growing power?

I don’t think so. What I see is a lot of, in fact too much, cynicism in the media industry about technology companies. We often respond with: oh my god, what can go wrong with this?

What I tell my students is that when a journalist sees a problem, we tend to write about it and think we have done our job, then go to the bar. We complain about the problem. Engineers and scientists see a problem, they try to find a solution. Entrepreneurs see a problem, they try to find an opportunity. We have to learn those skills. Too often, we only ask what could go wrong and don’t ask where the opportunities can be.

This story was first published by the World Editors Forum blog on the WAN-Ifra website and is republished here with permission.

Jarvis will be speaking at WAN-IFRA’s 23rd World Editors Forum in Cartagena, Colombia, this June about third-party distributors.