LATEST NEWS
Home Press Newspapers ‘We should write for our readers’

‘We should write for our readers’ 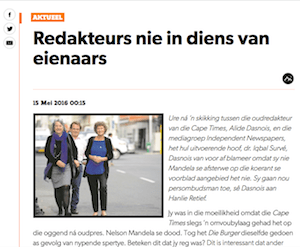 Shortly after Dr Iqbal Survé took control of Independent News Media almost three years ago with a multimillion rand loan from the PIC – repayable only after five years – one of the country’s leading financial journalists, Ann Crotty, resigned from the company. In a contemporary interview with GroundUp, subsequently reprinted on Daily Maverick, she outlined her reasons and what turned out to be prescient concerns:

Ann Crotty: “The decision was the result of a troubling sequence of events. While I acknowledge the rights of owners, I think the balance between the rights of the owners, the rights of readers and the rights of journalists has slipped out of kilter at the Independent Group.

“If you look at what is been happening at Independent, there is a sense that we – the journalists – might be too concerned with the views of the chairman. My decision to leave is largely motivated by the fact that we shouldn’t be writing for the chairman and the owners. We should be writing for our current readers as well as readers we hope to attract.”

Last week former Cape Times editor, Alide Dasnois laid a complaint against Independent Media with the Press Council, asserting that – in contravention of the Press Code – it had reneged on an agreement reached in an out of court settlement with her by printing two articles attacking her and not giving her the right of reply.

In this translated Rapport interview with Hanlie Retief she reiterates – and reasserts – the journalistic principles and values articulated by Crotty two and half years ago at the time of the Sekunjalo takeover.

Editors not subservient to newspaper owners

Within hours of agreement having been reached between the former editor of the Cape Times, Alide Dasnois and the Independent Media, its executive chairman, Dr Iqbal Survé, again blamed her because she did not carry the death of Nelson Mandela on the newspaper’s front page. She told Hanlie Retief that she has referred the matter to the press ombudsman.

HR: You found yourself in trouble because the Cape Times used a wraparound tribute on the morning after Nelson Mandela’s death – yet Die Burger did the same because of the acute deadline constraints. Does this indicate that you were right?

AD: It is interesting that other newspapers did the same – yet their editors were not dismissed.

HR: How did events unfold that night?

AD: We spent the day at a ‘strategy session’ in Claremont. At supper that evening we heard rumours about Mandela’s death. All the Cape Town editors immediately left for the office. The first edition was already at the printers. The deadline for the first edition is 21:30 to facilitate delivery to country subscribers. The death of Mandela was only confirmed at 23:45.

At such a moment you want to scrap everything and begin a new edition – without advertisements and devoted exclusively to Mandela – but time did not permit. The printers gave us a deadline of 01:00. We had to choose: replace the first few pages and leave the rest as it was or create a special edition.

I decided – and I still believe – that the most honest and powerful way to commemorate Mandela’s death was with a new newspaper, even though it only comprised four pages. That is what we then did – front and back covers, two inside pages and no advertisements. The first edition was folded inside the new one.

HR: But the owner of the newspaper did not agree?

HR: And inside the wraparound was a report about the Public Protector’s criticism of Sekunjalo – Survé’s company?

AD: The Sekunjalo report was our front page lead in the first edition because of justified concern about corruption and crony capitalism in South Africa. The Public Protector found that an R800 million tender – critical in the context of the survival of the fishing industry – was improperly awarded and recommended that the President take steps against the responsible Minister.

HR: Other editors might have hidden her report in the inside pages. Wasn’t that a bit risky, particularly on that specific day?

AD: It was an important story and it was patently obvious that it should be the lead story in the first edition. We would have led with that story irrespective of whether it involved one of the Sekunjalo companies or not. And that was our point right through this dispute with Independent Newspapers. Editors must be able to take editorial decisions. Once an editor starts speculating about whether a decision might be regarded as “risky” then editorial independence goes out the window.

HR: You say your only intention and objective was to set a precedent around press freedom, Independent says that is a smokescreen.

AD: In the settlement agreement, Independent admitted that – although they might differ on the way the Cape Times covered the death of Mandela – it was my call. That was a decisive acknowledgment.

HR: Survé says he feels sorry for you and that in your heart of hearts you know you were wrong.

AD: Survé likes to make such statements. In my disciplinary hearing he made similar remarks, assumptions that he knows better than I do what is going on in my head.

HR: Do you fear for the future of newspapers under people like Survé?

When a newspaper becomes a mouthpiece of the owner’s interests, then reading that newspaper is no longer worthwhile.