The media and Al-Bashir 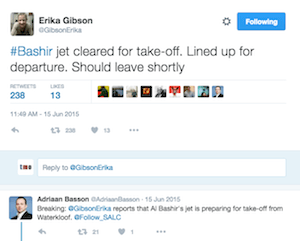 “Live tweets of Omar al-Bashir’s presidential plane taking off from Air Force Base Waterkloof gave us a memorable jaw-dropping moment on social media. The tweets were posted at about the same time as government lawyers were assuring judges that the Sudanese president was still in the country.” – Janet Heard City Press 21/6/2015

Like most South Africans I vicariously experienced the extraordinary drama that played itself out during the attendance of Sudan’s president, Omar Hassan Ahmad al-Bashir at the African Union summit in Johannesburg in June last year. Accordingly, as a media person, I read with fascination Janet Heard’s account of the people who revealed the details of his arrival and eventual ignominious, reprehensible and ANC- arranged escape.

Reporters are good at telling the stories of others but not so adept at telling their own unless, like Alex Crawford or Mzilikazi wa Afrika, they write books.

I therefore asked the co-ordinator of the media operation which exposed the ANC lies to worldwide scrutiny – Erika Gibson (@GibsonErika), a specialist reporter on SANDF matters who writes for Rapport and City Press – to provide her account of those dramatic moments.

Her first-person recollection of the dramatic account that played itself out that day provides a valuable role in a narrative which has yet to reach its conclusion.

In television news where, if you are lucky, you get 70 seconds to sum up often complex situations, you scan all available information looking for the “must ask” question.

To me, it can be found in this section of the SCA judgment of 16 March this year: Immediately after this order was made counsel for the Government (Advocate W Mokhari SC) told the Court that President Al Bashir had left the country earlier that day. According to an affidavit later filed by the Director-General: Home Affairs, the eighth applicant, he appears to have left on a flight from Waterkloof Air Base at about 11.30 am that morning. The affidavit failed to explain how a head of state, using a military air base reserved for the use of dignitaries, could possibly have left the country unobserved. The Director- General said that President Al Bashir‘s passport was not among those shown to officials of his department, but as an explanation that is simply risible. Senior officials representing Government must have been aware of President Al Bashir‘s movements and his departure, the possibility of which had been mooted in the press. In those circumstances the assurances that he was still in the country given to the Court at the commencement and during the course of argument were false. There seem to be only two possibilities. Either the representatives of Government set out to mislead the Court and misled counsel in giving instructions, or the representatives and counsel misled the Court. Whichever is the true explanation, a matter no doubt being investigated by the appropriate authorities, it was disgraceful conduct.

That question about disgraceful conduct still needs to be answered. In the meantime, here is the personal account of Gibson who played such a stellar role in bringing, with visual evidence, to world notice the account of al- Bashir’s escape and the appalling role, yet again, that the ANC has played in damaging our country’s fast-fading reputation for ethical foreign policy practice by siding with despots.

Journalists tell the stories of others but are reticent about telling their own. Gibson’s account breaks that self-imposed silence and I express the hope that this example of South African investigative journalism at its best is suitably recognised in the annual award ceremonies yet to come.

Erika Gibson: The AU summit in Johannesburg from12 – 14 June  last year was overshadowed not by what it achieved, but what it failed to achieve: its commitment to its international obligations – and the international furore after Bashir “escaped”.

I broke the exclusive news regarding both the arrival and the departure of the Sudanese president. While the eyes and ears of South Africans and the international media and diplomatic community were on the summit and while the debate about why the South African Government had allowed him to attend raged on, I coordinated a team of “plane spotters” and all we did was to follow his aircraft.

I normally cover aviation matters and I thus have a network of sources. Some station themselves at airports to photograph the arrival or departure of unusual aircraft, while others listen to the radio chatter of pilots on certain frequencies.

In this instance all my contacts reported to me.

It started on Saturday 13 June when one of my spotters photographed the arrival of “Sudan 1”, Al Bashir’s presidential jet. That photograph, and several subsequent pictures, upturned the whole applecart.

Bashir’s presence and, in particular, South Africa’s role in allowing him entry (and later exit) became one of the most embarrassing international stories of the year.

His arrival on a Saturday evening created huge time constraints and it was of national and international importance to make public details about his arrival as fast as possible. Twitter was the best medium for that.

I immediately tweeted my spotter’s picture of the aircraft’s arrival. As I was writing/tweeting in Afrikaans (working for mainly Afrikaans newspapers) I decided to repeat all my tweets in English as well, thereby spreading the word even faster. International media instantly picked up on my tweets. Despite our deadlines we nevertheless managed to get one of my spotter’s pictures onto the front page of City Press the next day.

Of yet greater importance was that this proof of Al Bashir’s presence in the country enabled the Southern African Litigation Centre to file an urgent application in the Pretoria High Court on Sunday morning for the arrest of Bashir.

The Centre contacted me just before midnight that Saturday night and I sent them copies of my spotter’s pictures to include in their court application.

I stayed in contact with my network on the Sunday as the debate raged on. I kept my eye on the plane, parked at the OR Tambo airport in Johannesburg, because I believed any movement of the plane could indicate whether Bashir was planning an escape.

Late on the Sunday evening one of my spotters reported that the aircraft was being readied for a flight to Waterkloof Air Force Base in Pretoria. To me that was an indication that there was going to be an escape and the move to a secure military base – where the press and curious eyes were not allowed – was part of the preparation. Again I resorted to Twitter and tweets in both Afrikaans and English to alert the world.

At that stage my followers grew by thousands within 48 hours!

We kept up our vigil until about 03h00 on Monday morning. I was convinced he would try an early morning escape before the court case resumed later that morning.

This did not happen then.

In the meantime we decided to place one of Beeld’s photographers, Alet Pretorius, on the hillside close to Waterkloof air base where there was a clear view of all arriving and departing aircraft. The application continued in court and was covered by colleague Jeanne-Marie Versluis while I kept an eye on the aircraft.

At the same time I had well-placed sources inside Waterkloof who reported to me what they were seeing. That is how I knew when the air crew arrived at the aircraft about 10h00. They were followed, shortly thereafter, by a convoy of vehicles under police escort.

One of the vehicles went straight to the aircraft while the rest took the passengers to the terminal to check out.

While counsel for the state, Advocate William Mokhari SC, was testifying to his ignorance of the whereabouts of the Sudanese president, I had already tweeted the news of his imminent departure into court. I also kept the lawyers of the Southern African Litigation Centre informed.

At 11:30am I was finally able to inform my increased audience of Twitter followers and the reporters who were in court that the man indicted by the ICC for genocide, war crimes and crimes against humanity against the people of Sudan’s western Darfur province was no longer on South African soil.

It was my aviation sources who subsequently provided the necessary proof on how unlikely the South African Government’s explanation was that it was unaware of the escape plan.

Providing documentary proof, I was able to reveal details of al-Bashir’s escape plan to the readers of Rapport and City Press and the readers of the News 24 website.

Those articles gave the lie to the narrative of the South African government.

This was a triumph for investigative journalism in South Africa.

It would not have been possible without a long-standing network of loyal and trusted sources who regularly help me in my work. It was a team effort by people, who, in the interest of truth and accountability, fearlessly kept the local and international community informed in the best traditions of ethical newsgathering and dissemination.

Ed Herbst is a retired journalist who writes on and analyses media stories.