LATEST NEWS
Home Broadcasting The Disruptor: Somizi changing it up

The Disruptor: Somizi changing it up 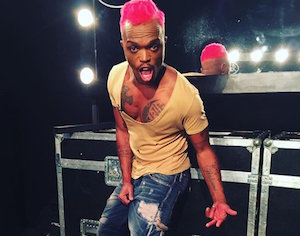 Idols judge Somizi Mhlongo is a very hard man to pin down and have a conversation with. Having caught him at various inopportune times as he was either preparing for a shoot, about to board a flight, in an Uber taxi on his way home, and even while taking a bath, I eventually managed to speak to this elusive yet flamboyant disrupter.

Mhlongo, a rather controversial character who has had his share of ups and downs, has definitely shaken up the local media and entertainment space.

He explains, “I’ve been authentically true to myself and to being me, not compromising or putting up a front or an act. What you see is what you get”.

Having recently scored his own reality show, Living the Dream with Somizi, which premiered in April on Mzansi Magic, Mhlongo describes the show as an extension of what his fans know him best for. He says, “I had constant requests for it. There was so much pressure from my fans for me to do my own reality show. They want more of what they have seen of me on social media and from the rest of my work over the last four years.”

His aim for the new show is to inspire those who watch by showing them that anything is possible, and that if they dream something they can make it happen.

After he joined the judging panel of SA Idols, many people were quick to comment that Mhlongo added life back into the show, bringing his quirky personality and style to the singing competition.

Being in the spotlight has always seemed to come naturally to Mhlongo whose appearance strikes one as much as his vivacious personality. “Disrupting makes you stand out, it makes you a step ahead of your peers. You become a trend setter and you can also remain relevant by evolving with the times and reinventing yourself,” he affirms.

In Mhlongo’s view, media and entertainment spaces need to be constantly changed up. “It would be so boring if those industries were still doing the same things. It keeps people on their toes and makes them work harder. When things are constantly changing, they need to keep with the times,” he adds.

As a proudly gay man in the sometimes conservative world of SA entertainment, in 1994, Mhlongo created his highly opinionated, drag alter-ego Madame Gigi who was cleverly able to get away with saying a lot more than Mhlongo could. He believes that Madame Gigi, “created debate around very awkward topics and conversations”.

But, has he ever faced discrimination for his sexuality? “I haven’t experienced any challenges, because a challenge to me is something that prevents me from doing something that I want to do. A handful of people have taken shots at me and I just move on. But, just because I haven’t had any challenges, it doesn’t mean that homophobia doesn’t exist. Maybe someone hasn’t been brave or bold enough to come to my face and tell me”.

Describing himself as colourful, bold, daring, driven, energetic and kind, Mhlongo is in the prime of his career and his new reality show gives South African viewers the chance to follow this entertaining media personality even more closely.

Of his Idols gig, Mhlongo says, “When I started I thought, this is my dream job and thought it would take my career to another level but I never expected it would reach the level it’s at now. It’s taken my social status to much greater heights and broadened my audience. I’m very grateful for that”.

This story was first published in the July 2016 issue of The Media magazine. Follow Michael Bratt on Twitter @michaelbratt8