LATEST NEWS
Home Press Allister Sparks: An editor in the vanguard of a Golden Age of South African journalism

Allister Sparks: An editor in the vanguard of a Golden Age of South African journalism 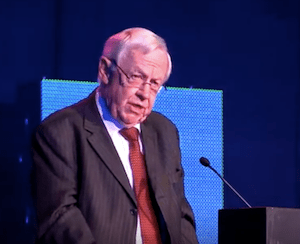 Renowned journalist, historian, and editor Allister Sparks passed away on Monday after a short illness. The Daily Maverick’s J. Brooks Spector had last seen him just a few weeks earlier at the memorial service of yet another towering figure, advocate Jules Browde, and the news of Sparks’ passing has come as a great shock. Spector contemplates Sparks’ place in South Africa’s modern history.

Allister Sparks was a fixture of South Africa’s media royalty for more than half a century – and one of the proudest exponents of the media’s crucial role in his nation’s history. In his final published book, a personal memoir entitled The Sword and the Pen that was released in March 2016, Sparks attempted to define himself in the context of the history of his country and the part of that world he knew best and which he had learnt to savour early in life.

Right at the opening of his memoirs he had written: “I was born on the frontier. Literally. The border of our Eastern Cape farm was the Black Kei River near its confluence with White Kei to form the Great Kei, which flowed into the Indian Ocean some 75km north of the port city of East London and itself formed the border between the white settlement region of Britain’s old Cape Colony and the large ‘native reserve’ of Transkei. It was thus the first fiercely contested frontier between white and black in South Africa – between the white settlers who had been moving up the east coast since landing at the southern tip of the continent in the mid-17th century and the indigenous black Africans who had been drifting southwards for centuries in slow rhythmic shifts of generational expansion. It was an encounter that was to become the quintessence of all our history. And thus, too, of my life.”

But of course he was much more than just the sum of that historic clash. He became one of South Africa’s finest journalists, and one of its most courageous editors, as well as a widely read and appreciated contemporary historian. And he was a man who understood that the very craft of journalism he worked at so effectively also needed to be nurtured and passed on to future practitioners. Such an understanding was key for Sparks when he led the way in establishing the Institute for the Advancement of Journalism in Johannesburg in 1992.

Sparks had honed his craft – in homage to the familiar adage that described journalism as the first draft of history – the old-fashioned way as he served an apprenticeship through several rounds as a cub reporter for small, local papers, as a general reporter for yet bigger papers, as a sub-editor, and then, eventually, up the ladder as a parliamentary correspondent and into various levels of editorship.

Along the way, in 1962, he received one of those coveted Nieman Fellowships for a year of study, writing and thinking at Harvard University in Cambridge, Massachusetts. And all this was prelude to his glory years as chief editor of the Rand Daily Mail (following in the footsteps of the crusading editor, Laurence Gandar) – at a time in South Africa when journalism could be a calling or the road to a prison cell or even a death sentence.

Aubrey Matshiqi, a fellow columnist on Business Day (and a former MK veteran), said of Sparks that he “belonged to a generation of journalists whose fearless opposition to the ravages of the apartheid regime made them an integral part of the struggle against apartheid. Theirs was a golden age of journalism, an age which coincided with one of the darkest periods in our history. Sparks’ legacy of courageous journalism is one of the reasons we are blessed with a constitutional order in which media freedom has embedded itself.”

Assaults on the apartheid machine

It is important to remember that Sparks was a reporter and then an editor at a time when there was no internet, no social media, no television (until 1976 and then only in a few homes at first), and all of the local radio channels reported the news the government’s way. Consequently, reporting from someone like Allister Sparks, or in the paper he edited, became crucial opportunities for South Africans to learn about the horrors of the apartheid regime so that no one could honestly say, later, “They didn’t know.”

Perhaps his finest moments came when he led his ‘troops”’ in their assaults on the apartheid machine  as they uncovered and wrote about such things as the grim truth of the death of Bantu Stephen Biko at the hands of the police, or that tangled web of corruption that was at the heart of the Info Scandal. The latter included the use of secret government budgets to create a newspaper that would support government policies domestically in opposition to real newspapers, as well as to purchase newspapers abroad with those same secret funds in order to bend foreign coverage of South Africa to shine the most favourable possible light on apartheid’s many madnesses.

Thinking about Sparks’ impact in such circumstances, broadcast journalist (and also contributor to this publication) Stephen Grootes said of Sparks, “With his insistence on revealing the truth about the murder of Steve Biko, Allister Sparks did what most journalists can only dream of. He changed history, he changed the story, he told the truth. To do this required guts, strength and a real devotion to his craft. I can’t help but feel that without such an important exposé in our history, so much else would have been kept hidden.”

But perhaps even more than simply leading his reporters and editorial deputies, Sparks worked hard to protect them from the timorousness of his own newspaper’s business management. These were directors who sometimes seemed over-eager to wilt before advertisers increasingly eager to abandon a paper causing trouble for profits by tackling the government, as well as losing subscribers less and less willing to buy a paper that was taking on the government and giving everyone the bitter aftertaste of a conscience.

Eventually, the owners of the paper, South African Associated Newspapers – in a complex financial tower that eventually led back to the Anglo American Corporation — tossed Sparks overboard from the Rand Daily Mail ship. This happened even as the paper was garnering an extraordinary global reputation under Sparks’ editorship for its tenacity and courage in the face of a seemingly implacable government security juggernaut.

At that point, many people might well have said, “Oh well, okay, then. Off you go to your retirement and some engrossing but unthreatening, anodyne hobbies like fly fishing or numismatics.” Instead, Sparks began yet another chapter in his life as an increasingly valued “foreign” correspondent for European, British and American newspapers – Sweden’s NRG Handelsblad, Britain’s The Observer and The Economist, and The Washington Post in America.

In so doing, Sparks educated a global audience about what was taking place inside South Africa and throughout the region as a whole. This reporting was deeply informed by his decades of writing about a nation and a subcontinent he already understood better than most. Along the way came his highly regarded trilogy of books on South Africa’s contemporary history: The Mind of South Africa; Tomorrow is Another Country; and Beyond the Miracle, as well as the authorised biography of Archbishop Desmond Tutu (together with Mpho Tutu).

This writer, living and working in East Asia or in Washington during much of that time, but still eager to understand what was happening in South Africa while far away from the country, came to rely upon Sparks’ careful reporting in The Post and The Economist, especially as the political, societal and economic circumstances in South Africa seemed to come ever closer to the abyss. Unlike so many other reporters from the “frontlines”, in his writing for overseas audiences Sparks never seemed to put himself in the centre of the action. The story was the key – and explaining it was the goal. His writing was consistently pellucid and sympathetic to the underdogs, always clear-eyed and factual – but with a steady sense of right and wrong.

A journalist ‘to the marrow’

As veteran journalist Peter Fabricius said upon hearing of Sparks’ passing: “He was a journalist to the marrow and I especially respected him for the way he never lost his journalistic curiosity despite his achievements as an editor. He continued to look for the great story. I think for instance of his scoop in the mid-1990s – which became a great book – about the secret negotiations which Mandela had conducted with the National Party government from jail. He also continued to hold the ANC government to the same standards as he had held the apartheid government, which was probably rather a shock to them, but showed the respect for his readers which was the cornerstone of his journalism.”

Almost to the end, Allister Sparks wrote his typically thoughtful, articulate columns forBusiness Day, trying to give his readers a sense of scale and history on whatever he wrote on, rather than simply rehashing the news of the day. Even that one, much-criticised hiccup, his mention of HF Verwoerd, the veritable architect of apartheid, as a brilliant politician, when Sparks had spoken at a dinner in honour of then-DA leader Helen Zille (who had, in fact, been one of the young reporters on the Rand Daily Mail who had broken the story about the death of Steve Biko way back when), should not weigh against him. It was certainly not meant as nostalgia for a lost apartheid Valhalla. Instead, it seems more to have been meant as a commentary on the truth that brilliance, sans humanity, becomes a home for monsters.

When he passed away, Allister Sparks reportedly had still other writing projects in various stages of preparation, working from a home office that housed an invaluable archive of material on South Africa’s modern history. And in the closing lines of his memoir, The Sword and the Pen, Sparks had set out his credo for his sense of the future of a country (and for a world) he loved so much, and about which he had reported on so bravely for so many decades.

On the final page of his memoirs Sparks wrote: “…All of us in this shrinking world have to learn to live in harmony with ‘the other’. Nelson Mandela and Archbishop Desmond Tutu, both Nobel Peace Prize winners, have given South Africans the vision of a ‘rainbow nation’ at peace with itself and the world. Now we have to conjure up the vision of a ‘rainbow world’.

“Not easy. It’s going to require instilling a great deal of tolerance, empathy and human understanding. And we South Africans have been assigned the role of showing the way. The polecat of the world has become the pathfinder.”

His writing helped show the way.

Image: Allister Sparks at Vodacom Journalist of the Year awards, 2010