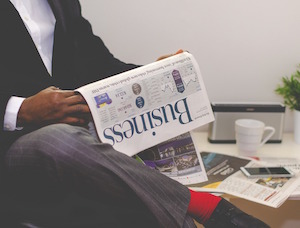 Print publishers should use graphic design in addition to other tools to improve sustainability, says Pedro Matos, a design instructor and researcher at the Polytechnic Institute of Portalegre in Portugal. Publishers must also communicate their environmental efforts more effectively, he says.

At WAN-IFRA’s World Publishing Expo in Vienna in October, Matos will speak during the Print World conference at a session titled The Power of Print Innovation. His presentation will describe what publishers need to do to make their print newspapers more sustainable.

In the following email interview, he suggests some ways publishers can save visual space, increase their publications’ impact, and improve sustainability.

WAN-IFRA: How, exactly, can the design of a newspaper improve sustainability?

Pedro Matos: In design, sustainability is often closely related to saving resources. In a printed newspaper this means, mainly, saving paper, which is one of the aspects that has greater environmental impact but also a large financial impact on newspaper production.

With this in mind, there are many things a designer of a printed paper can do to save space. Of course there is always the need to maintain good visual communication of news and, most importantly, keep the focus on information, on space for text, in order to give journalists the possibility to write in-depth and thoroughly inform citizens. So it is important not to just shrink the size of the publication and all graphic elements accordingly, as some magazines are doing today.

A good path for designers to achieve that is by choosing typefaces that can save space and by composing text in a compact way. Condensed typefaces for headlines are important, but a good type for body text is just as important.

But when it comes to saving space, the option that can get better results is reducing the size of newspapers. This is also a bold move for any publication, but it can lead to savings up to 20 percent or more, depending on the original and final sizes of the newspaper.

The reductions in print circulations of most Western publishers have led to the closures of printing plants in Europe and the United States. That might lead some people to believe there is less cause to be concerned about the related environmental issues of print newspapers and sustainability. How would you respond to this?

Reductions in newspaper sizes have a positive environmental impact, but also from a financial point view savings are very significant. Newspapers aren’t reducing size just because of environmental concerns, but also (and mainly, in most cases) because of the need for financial savings.

The problems that have been forcing media companies to save money are external: fewer readers, fewer advertisers, and so on. In this context newspapers were (and are) forced to change.

The way our society has been evolving has been leading to a decrease in the use of printed paper, and a massive jump to digital.

Printing plants all over the world are suffering from that in most areas, not only in publishing. I believe the response to that is to try to make the best we can of print.

Usually this effort leads to financial advantages, but even if at first it doesn’t, companies must inform customers that they are changing for the better. If governments are not imposing those measures at the moment, sooner or later they will – and people will realize the importance of doing so and will reward that.

Anyway, I also believe that if a size reduction is followed by a good marketing campaign, stressing the environmental and practical advantages of smaller formats, it may lead to good receptivity among younger people, commuters and female consumers.

One other positive aspect of smaller formats is that they may drive subscription sales, which in many countries are poorly developed.

What are the first steps a publisher should take when addressing sustainability?

Probably many of them are already doing some things in that direction. In Portugal, I know that some newspaper printing plants are environmentally certified and that most newsprint comes mainly from certified paper mills. But, as far as I know, publishers don’t see a need to improve their overall production workflow, from consumables use and newsroom functions to third-party suppliers and so on, taking into account the entire life cycle of the newspaper.

Getting certifications is probably the more reliable way to get good results. If you choose certifications that people know and trust, all the better. ISO 14001 was one of the first and is generally known among companies.

FSC is becoming popular among consumers. Recently, EU Ecolabel has been gaining importance, because it is not only environmentally-driven but involves social issues as well.

ISO 26000 still is generally unknown, but its suggestions for socially responsible good practices are fundamental for a company in the 21st century.

It’s not easy to get a certification (or more than one). But it’s worth the effort, primarily if you spread that message to readers, using it also as a marketing tool.

Can you give some examples of a few newspaper publishers who you think are doing a good job with sustainability?

Unfortunately, I don’t know many. In some cases that might have to do with a lack of effective communication about what they are doing to become sustainable. But I believe that much has yet to be done in this area.

As I said before, a few steps have been taken, but in general terms, media companies don’t seem to care much about this issue.

Of course, if we talk about journalism, many companies follow ethical rules of responsibility and integrity, which is also part of sustainability. But when it comes to newspaper production, printing plants and paper mills are doing most of the work. In the design of their publications, I haven’t noticed major moves towards sustainability.

Some Brazilian newspapers, like the ones owned by the media group Estado, are printing on FSC-certified paper and are using the FSC logo on their front pages.

That is the only example I know of the use of this label in newspapers. In Europe, the Finnish group Alma Media is the only media group that I know of that has a sustainable media programme, even if it has not reached design yet.