SABC madness continues, but only in eyes of media, opposition parties 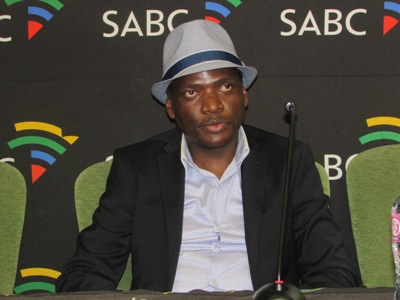 Hlaudi Motsoeneng has been appointed as general executive of corporate affairs at SABC, a position that he previously held. This after courts ruled that Motsoeneng’s appointment as chief operations officer was invalid. Michael Bratt attended a press briefing to find out more.

SABC board chairperson Professor Mbulaheni Maguvhe started the briefing saying he needed to put the record straight. “My mouth doesn’t talk for the sake of talking,” he began. “There is a perception being created by an opposition party and media that SABC doesn’t respect our legal institutions. We respect our legal institutions, amongst them the Public Protector’s office and our courts”.

He cited the SABC implementing a disciplinary hearing against Motsoeneng, a recommendation of the Public Protector in her report, When Governance and Ethics Fail, as an example of the public broadcaster adhering to legal processes. He added, “Unfortunately when things don’t go your way, you think that processes were not followed”.

The key message from SABC throughout the briefing was that the court’s judgment said nothing about firing Motsoeneng and in fact said he could hold any position at the public broadcaster, including COO, if requirements are met, he is cleared of all allegations, and due processes have been followed.

Commenting on Motsoeneng’s reappointment to his old position, Maguvhe said, “He did well for this organisation. He raised funds for us. Local content is being preferred instead of the other content that we import and this is benefiting our society at large, including the artists”. Maguvhe concluded with a strong message. “I would also like society and especially opposition parties not to interfere with SABC processes, because they are the ones that are destabilising this organisation and with that instability we won’t be able to fulfil our mandate”.

SABC acting CEO James Aguma was the next speaker. “Motsoeneng will be contributing to the effecting of the strategy that we developed 3 years ago, and Motsoeneng has been instrumental in contributing to that strategy,” he said. In his new position Motsoeneng would deal mainly with stakeholder relations, along with overseeing provincial operations, as well as broad corporate affairs, especially marketing. Raising of revenue will also be key.

“The SABC is the only public entity where you get instructions from outside parties … we hear those things but we don’t take them very seriously as we have a corporate plan that should guide our operations,” he said. Asked who had reappointed Motsoeneng, Aguma explained general executives were appointed by executive directors, not the board so it was himself and the acting finance chief, Audrey Raphela, who gave the go ahead for Motsoeneng to return to his old position.

“Transformation is not on the agenda, it is the agenda … let’s get the organisation back to where it needs to be … If staff get out of line we have disciplinary processes and we will be very resolute. We may not talk but we shall act!” Maghuve said.

The man of the moment Motsoeneng was the next person to approach the podium. He spoke mainly about what he intended doing in his new position, emphasising that SABC platforms should cater for all 11 languages and that management of SABC provincial centres needed to be empowered to make their own decisions, rather than relying on the Gauteng powerhouse. He also confirmed that he would re-apply for the position of COO as he said he was qualified to do so.

“I respect the court. The reason why I went for disciplinary hearing is because I respect those processes and I was cleared, but few people, those who are malicious read the court judgement, they mislead the public. The problem we are dealing with in South Africa is that people push their agendas,” Motsoeneng said.

Motsoeneng also stressed there would be a strong focus on technology at the public broadcaster, ensuring it was up to scratch. He also spent some time singing his own praises and claiming to perform miracles.

The SABC then trotted out lawyer Paul Ngobeni, to give a short talk explaining everything that was wrong with the media’s coverage of the Motsoeneng court ruling. But according to journalist Stephen Grootes, Ngobeni was a fugitive, on the run from the United States where he is accused of a string of crimes including larceny, forgery and the illegal practice of law. Ngobeni responded to Grootes at the briefing by denying he was fugitive, saying they were nonsensical allegations, and Grootes was talking about things that he knows nothing about. But Mark A. Dupuis, communications officer for the Division of Criminal Justice, State of Connecticut confirmed to Moneyweb that “The status of the case remains unchanged, the charges are pending and Paul Ngobeni is a fugitive from justice in the State of Connecticut.”

During the question time, the media also asked whether Motsoeneng was still going to Mauritius this week, whether he was paid a bonus and when a new COO would be appointed. The SABC confirmed Motsoeneng was still going to Mauritius today, refused to comment on the bonus question as it is an employer employee matter, and stated that a new COO will be appointed as soon as board processes are completed. No timeline was put forward for the appointment.

The SABC’s financial results will be released on Thursday morning.