Pop-up newspaper: A story of absolute agility and opportunism 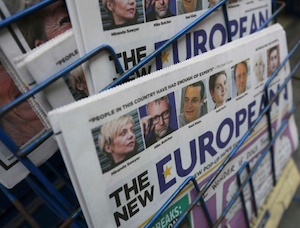 Friends visiting from abroad, and friends travelling abroad know that the best presents they can bring me are overseas publications. Obviously English language ones are the easiest to appreciate, but I will happily wander through foreign languages publications, enjoying the photography, typography and art direction.

Recently I was given a copy of The New European. Not only is this an example of first rate English journalism, but it is a bold new concept in newspaper publishing.

The New European is a ‘pop up’ newspaper, and a product of the unexpected ‘Brexit’ result in the UK. Not surprisingly, the immensely divisive European Union referendum was a boon for newspaper circulations. The weekend following the vote, The Times announced an 18% gain and The Guardian’s circulation increased by more than 20%.

Launched on 8 July, just less than a fortnight after the announcement of the referendum results, The New European is aimed at the defeated 48% – those voters who wished to remain in the E.U. According to the website, the publication sets out to “provide in-depth analysis of the Brexit process, its implications and progress as well as a celebration of European life and culture with contributions from some of the most respected journalists and opinion formers from the UK and Europe… Every Friday a brand new weekly newspaper will play its part in this time of critical discussions… The New European is not aligned with old political divisions but with an enthusiasm and love for Europe; a new quality newspaper that gives voice to the values of the 48%”.

The focus on the 48% is expressed in witty ways: the publication is 48 pages long, and there are 48 bottles of wine to be won in the “stupendously hard euro quiz”. The newspaper is divided into three sections – Agenda, Expertise and Eurofile. Expertise serves as a rebuke to Michael Gove, the ‘Leave’ campaigner, who expressed the infamous opinion that “people in this country have has enough of experts”. (His infamy extends further to decision to “put the boot” into his fellow Brexiteer, Boris Johnson.) Eurofile is a reminder of the readers’ passion for Europe. 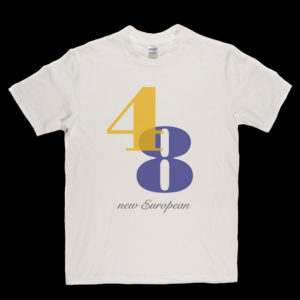 Pleasure to look at

Expertise certainly abounds. In my issue, a professor of sociolinguistics explains how nearly all the languages of Europe have descended from a common route. Another prof – this time of politics – explores how UKIP has swiftly devolved into chaos after Farage’s resignation. There is an article by a Pulitzer prize winner about a “hero who stood up for his beliefs, despite the personal cost”. A philosopher presents “five reasons why the UK must ignore (the) vote”.

Weighty and academic matters are balanced with round ups of events in Europe, interesting trivia (from lion cubs in a Croatian zoo to a regatta of robotic crafts in Portugal) and incisive cartoons. The humour extends to various ranges of T-shirts and mugs stating Europhile stances. There is an article of three pages on Bowie’s years in Berlin, and one about Lichtenstein’s national day.

The newspaper is a pleasure to look at thanks to the generous use of colour and whole pages of visuals, photographs and infographics. “That Brexit Feeling in the style of Rio 2015” is a montage of Olympic competitors in moments of disaster and despair – and an amusing reflection of the 48%’s post Referendum feelings. There is a double page feature of a smartphone portraits of a Venice.

Throughout the publication, there is a clear recognition of the younger and more metropolitan demographic of the Remainers. For example, there is double page article about the rise of social media Influencers in the world of global fashion retail. The Letters page is a melding of carefully crafted pensmithing and tweets. One of the latter – “Despite being the best part of 36, I don’t recall ever buying a newspaper @TheNewEuropean is a first…” – is a great testament to the vision of the newspaper.

An article about the brands most liked by Brexiteers and Remainers, is a particularly amusing pointer to the social, regional, class and age divides that separate the two viewpoints. The most favoured brand amongst leavers is HP Sauce. (Rather disconcertingly, I learnt that this supposedly quintessential English brand is now manufactured in the Netherland.) Food brands figure strongly amongst the Leavers – Bisto, Birds Eye, Cathedral City cheese, PG Tips and Richmond sausages. Their media brands are ITV and Sky News. By contrast the Remainers name BBC.co.uk and BBC iPlayer in the broadcast field. Social media and digital brands predominate in the Remain camp – Instagram, Spotify, Airbnb, Linked In and Twitter.

Interestingly The New European is produced by Archant, a publishing company focused on geographical and specialist interest communities. The company publishes newspapers such as the Ham & High (for the areas around Hampstead and Highgate), the Beccles and Bungay Journal, the Royston Crow, and magazines such as Anglia Afloat, Everything Epping Forest and Yorkshire Bride.

As a community publisher, Archant, had a distinct advantage in terms of having an existing distribution network. Simply overlaying the referendum results by area over the Archant distribution maps gave the publisher a precise targeting guide. Intimate knowledge of these communities, together with a passionate viewpoint obviously provided the springboard for swiftly assembled editorial. Priced at £2, the first edition sold around 40 000 copies, more than the short-lived daily, The New Day, managed to achieve.

The first edition ran without advertising support, but the ad sales team brought home the bacon from the second edition. Because the publication has largely been run using existing infrastructure and resources, it was immediately profitable. It was originally intended to run for four weeks, but such has been the reception that it has just produced its ninth edition. Archant will continue to publish the title as long as there is interest, but is not wedded to it long term.

This is , that is seldom associated with print publishers. Archant has stated their intention to pursue more ‘pop-up’ opportunities. There must be many, although such a zeitgeist moment is rare.