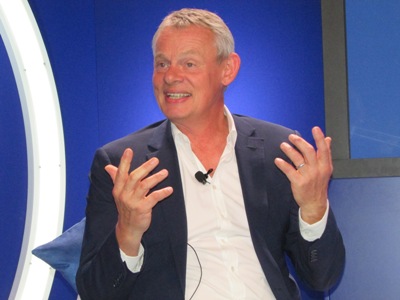 South African television viewers seem to be lapping up British programming, if ITV Choice’s showcase of its upcoming shows is any indication. Michael Bratt attended the event, to find out what new programmes viewers can look forward to, what the appeal of British television is for the South African audience, and why ITV Choice is investing so much time and resources into the African market.

Held at The Venue at Melrose Arch, the highlight of the showcase for most attendees was the appearance of acclaimed British actor Martin Clunes, star of such shows as Men Behaving Badly and currently Doc Martin. Ian Royce was the emcee for the event and started off proceedings with light-hearted banter, which included selfies with audience members and him calling people’s fathers on their phones. More hilarity followed as Martin Clunes took to the stage to be interviewed by Jenny Crwys-Williams.

After the formalities, attendees got to mingle, during refreshments, with ITV representatives. ITV entered the South African market in May 2015 and since then has doubled both its ratings and number of viewers. Speaking to The Media Online, Katherine Wen, Channel Director at ITV explained why the self-proclaimed “most popular broadcast channel in the UK” chose the South African market, “We try to find regions where there is a natural affinity for British content, because our focus is very much on bringing the best of British entertainment. Also because it’s a major English speaking market so naturally we thought our content would translate better to this market. So it’s, is the audience a good match for the type of content that we would bring. South Africa seemed to tick the boxes.” ITV concluded a partnership with DStv for the latter to host the former’s channel on its platform. This means that ITV is also accessible in all the other African markets that DStv has a presence in. The British broadcaster did not get it right straight away. Wen admits that it took some time to tweak the programming to get it right for the South African audience, citing The Jeremy Kyle Show as one example of where programming was not well received. “If we had a second channel, maybe a younger skewed channel maybe it [The Jeremy Kyle Show] would work. But I think on this channel where it’s all about warm, home, family it just didn’t really work,” she explains.

Wen also touched on the success of ITV, comparing its format to that of the other major British broadcaster present in the market, the BBC. “The BBC has taken a much more genre based approach to each of their channels … ITV is about general entertainment where you can decide to stick on ITV and get that whole breadth … We’re not about just drama, just lifestyle, we want to offer something for everyone. So that definitely differentiates us in the market … It’s about great powerful stories, really talented, funny presenters, curating subjects of popular interest. We have that freedom. We don’t have to be too serious. It makes it more fun.” She adds that ITV is looking into the possibility of adding more channels in the South African market (like BBC has) particularly one that targets a younger audience.

Creating a family feeling with the audience

Since launching in South Africa, the British broadcaster has been focusing on three key areas to attain growth, identity, content, and audience. The latter has been heavily influenced by social media, a mechanism that ITV has used to gauge the personality of its viewers and what their needs and wants are. Feedback from its partner DStv has also allowed ITV to gain a better understanding of its audience. “We have really focused on trying to get to know our audience. ITV viewers are passionate about our content. They spend a lot of time watching our channel, spending on average 55 minutes per day watching. They love being challenged by quiz shows. They feel like they have a personal relationship with the channel and engage a lot on social media,” Wen says.

The best of British programming

During the showcase ITV unveiled eight of its premier programmes; newly launched Victoria, Poldark, Cold Feet, Benidorm, The Chase, The Jonathan Ross Show, Long Lost Family, and of course Doc Martin, whose star Martin Clunes was in attendance. During his interview with Jenny Crwys-Williams, he revealed some fascinating insights into the show. These include; the show puts a lot of money into the local economy of the town where filming takes place (including a trust being set up where a percentage of the overseas sales goes to works that benefit the local economy), Clunes’ wife is a producer on the show, Clunes looks up how operations are performed on YouTube, and the show is based on a film called Saving Grace. Speaking on the appeal of Doc Martin Clunes says, “We resolve something at the end of each week, there’s something about the containment of a small community that audiences have liked. And there’s something about him, the English want a man in a suit who can fix everything but also smash into a door frame which Doc Martin gives you both.”

Speaking to The Media Online after the event, Clunes explained more about his relationship with ITV, “They [ITV] have always shown great faith in me … you can get nurtured at ITV in a way that people don’t really have time to in a lot of places. I was really lucky because of that. BBC, everyone is too busy nurturing themselves or watching their backs, but at ITV because it’s commercial it’s quite black and white, if people watch it then it stays, but if people don’t watch it then it is off, because they have to sell advertising. It’s quite nice to have that breath of fresh air, it’s very clear thinking. Now I have been there for so long, they’ll have to shoot me to get rid of me.”