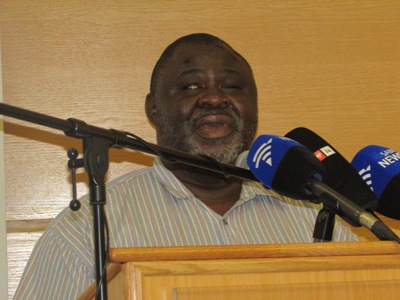 [Story updated] The resignation of the SABC board’s last member, its chairperson Professor Mbulaheni Maguvhe, will not affect the work of the ad hoc committee set up to investigate whether it was fit for duty.

“It is great news that Maguvhe has resigned, however the inquiry must go on,” the Democratic Alliance’s national spokesperson, Phumzile van Damme, told The Media Online. “We always agreed, as a committee, that we would continue with our work even if he decided to resign. We have uncovered so much during the inquiry that cannot be left without resolution or recourse.”

Maguvhe’s resignation has been welcomed by the Office of the Chief Whip. In a statement, spokesperson Moloto Mothapo said the chief whip’s office regretted that Maguvhe’s “conscience took excruciatingly long to speak to him, thereby causing further damage to the corporation’s governance and frustrating Parliamentary intervention” but added it was confident his exit would “speed up the process of addressing leadership crisis at SABC”.

The ANC’s chief whip, Jackson Mthembu, was responsible for an ad hoc committee’s investigation into the fitness to hold office of the SABC’s board. Mthembu was outraged by the reappointment of controversial former COO, Hlaudi Motsoeneng, to another position in the executive after a court had ruled his appointment unlawful. “The shenanigans that have been unfolding at the SABC only serve to distract the public broadcaster from discharging its core public service mandate,” Mthembu said at the time. “The appointment of the corporation’s former COO, whose previous appointment was also set aside by the courts, is without a doubt the last straw that breaks the camel’s back.”

Most board members resigned ahead of the ad-hoc committee’s investigation, but Maguvhe refused to budge.

Earlier, Presidency announced Maguvhe’s resignation. “President Jacob Zuma has received and accepted the resignation of the Chairperson of the Board of the South African Broadcasting Corporation (SABC), Professor Mbulaheni ObertMaguvhe. The President has thanked ProfessorMaguvhe for his services during his tenure at the SABC and wished him all the best for his future endeavours,” the presidency said in a statement.

The ANC chief whip’s office had harsh words for Maguvhe. “It is unfortunate that Prof Maguvhe chose to sacrifice his personal reputation and professional integrity by putting his selfish personal interests ahead of those of South Africans, who are the shareholders of the SABC. The unacceptable obstinacy of board members who remain stumbling blocks to resolving corporate governance problems is a lesson which Parliament must learn from going forward. The Broadcasting Act might need to be revisited and tightened to ensure that inquorate Boards or individuals are not allowed to hold such important public institution to ransom,” Mothapo said.

“With Maguvhe’s departure, we will now await Parliament’s conclusion of the inquiry, which may necessitate the swift appointment of the interim board. The outcome of the inquiry and lessons learned will enrich the process of finding a suitably qualified members of the new board.”

Not sad to see him go

Reacting to the news, William Bird, director of Media Monitoring Africa said he didn’t think anyone would be too sad to see him depart. “The question is, why didn’t he resign months ago when the others did? But we have to acknowledge we possibly wouldn’t have had the inquiry if he had resigned.

“We needed to lance the boils at the SABC and the inquiry has lanced a lot of boils. I think there is more pus at the SABC than in a hospital,” he added.

When asked whether he believedMaguvhe’s resignation would affect the SABC inquiry Bird said, “We hope the ad hoc committee completes its report and strong action is taken as it involves more than just the SABC, including high level executives and even the Minister of Communications Faith Muthambi. We hope this isn’t used to let other people off the hook”.

The Save Our SABC (SOS) Coalition echoed Bird’s sentiments, with national co-ordinator Duduetsang Makuse saying, “It’s a welcome development. We’ve always maintained that there has been no SABC board since September. Our focus is on ensuring the work of the inquiry goes ahead so that we can be a part of a process of the formal restructuring of the SABC.”

She added that the SOS Coalition wants the inquiry to gather the facts and explore the nuts and bolts of what actually happened at the SABC so history doesn’t repeat itself in future.