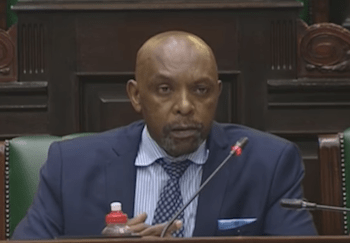 It’s no surprise that, according to ROi Africa’s Media Watch, the parliamentary inquiry into the goings-on at the SABC was the biggest story of the past week.

‘SA social media was relentless about the SABC inquiry, generating over two thirds of the charts during the week,” said the company’s Tonya Khoury.

Then came the news on Monday that the ‘last man standing’, the public broadcaster’s stubborn chairperson, Professor Mabulaheni Maguvhe, had finally resigned. But his action was way too late to stop the inquiry (which resumes in January) and the report by committee members which is due at the end of February 2017.

As the DA’s spokesperson and member of the ad hoc committee, Phumzile van Damme, told The Media Online the inquiry had uncovered all sorts of murky stuff that needed “resolution and recourse”. And those responsible must be held accountable, she said.

Looking back at The Media Online’s coverage of the SABC crisis, over the period of four years, has revealed how much of the stuff coming out at the inquiry was known back then. From dodgy auditor general reports and the wasting of vast amounts of (public) money to political interference and Hlaudi Motsoeneng’s reign of terror – it’s all there. But ANC MPs, now among the most vocal critics of the SABC and its lack of ethical governance, simply didn’t want to hear. Or were afraid to hear. Either way, they didn’t listen.

Some of the key actors in the SABC reality show still need to show their hands, and we’re awaiting the resumption of the inquiry in January to hear what they have to say for themselves.

The former head of news and acting GCEO surprised many when he suddenly resigned in June 2016, penning a resignation letter which he made very public.  “For many months I have compromised the values that I hold dear under the mistaken belief that I could be more effective inside the SABC than outside, passing comment from the side-lines. In the process the prevailing, corrosive atmosphere has impacted negatively on my moral judgement and has made me complicit in many decisions which I am not proud of. I wish also to apologise to the many people who I’ve let down by remaining silent when my voice needed to be heard. What is happening at the SABC is wrong and I can no longer be a part of it.” Now South Africa wants to hear from him. COPE’s Dennis Bloem said Matthews should account for his ““manipulating and corrupting the SABC newsroom”. Will the ad hoc committee insist on him making an appearance before them?

2.     What will former chairperson Dr Ben Ngubane have to say for himself?

Zuma’s ‘hatchet man’ is now chairperson of Eskom. The EFF has referred to him as “Zuma’s son in law”. What could that mean? What’s in doubt is Ngubane is the president’s man. And as chair of the SABC board as things fell apart, he is certainly someone the committee needs to interrogate. Chairperson of the ad hoc committee, Vincent Smith, said Ngubane would appear before the committee on Ngubane resigned as chairperson of the SABC board in 2013 when the disgraced Dina Pule (she of the Laboutin shoes, the ICT conference and the expensive boyfriend) was still communications minister. At the time, a number of board members resigned with former member, David Niddrie, saying there had been a failure by the Parliamentary Portfolio Committee on Communications to “exercise full oversight over both the SABC and the Minister and the department of communications”. This, he said, has undermined the SABC board’s ability to fulfil its responsibilities. The scary thing is, this was back in March 2013. It would be another three years before any action was taken by Zuma’s administration.

Another former SABC board chairperson, Tshabalala resigned after being exposed as having lied about her qualifications. Hmmm. Didn’t someone else (formerly) VERY high up in the SABC’s executive structures also lie about qualifications? And didn’t he remain very firmly in place? Tshabalala faced an inquiry by the portfolio committee on communications back in October 2014. But three months later, she had no compunction in handing over more power to Hlaudi Motsoeneng by appointing him acting CEO of the broadcaster. A day later, the DA laid perjury charges against Tshabalala. And a few days after that, she resigned. Almost two years to the day before Maguvhe did the same. Tshabalala, says Smith, could also appear on 10 January.

4.    Why hasn’t Hlaudi Motsoeneng been subpoenaed?

The man at the centre of this drama. The prime mover behind so much of what has happened over the past four years at the SABC. The man “Baba” is so fond of. The man with the president on speed dial. The man who has made millions out of the public purse and pays himself more than the president of the country. It’s an ‘open secret’, says one of the SABC 8, Lukanyo Calata, that Hlaudi has the “support of the president”. He’s been hired and fired more times than than we can count. (He’s currently fired. But who knows how long that will last?). The man who says the SABC doesn’t have to be profitable. Whose decisions could (and has already) cost the broadcaster billions and impact on its mandate to serve the public. Whose antics have besmirched every hardworking, honest employee at the SABC. What of Hlaudi, chairperson? When will Hlaudi account to the nation? The ad hoc committee should be honour bound to ensure this happens. South Africans deserve answers.