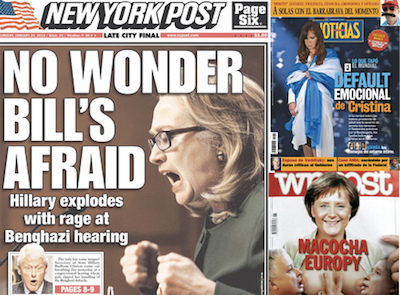 South Africa’s governing party, the African National Congress (ANC) is heading towards its elective conference in December, and talk of succession, and possibly, a female leader of the party, is one of the key themes of this battle. What could the media in South Africa learn about how to report fairly on women politicians?

What do we see when we look closely at media coverage of female politicians and political candidates?

As a scholar of gender and political campaigns, I’ve been monitoring this issue since 2013. Here’s what I’ve found.

Female candidates are often asked whether they can “juggle” their political responsibilities with their role as a mother.

For example, as USA Today wrote in 2014, “It’s unclear how Chelsea’s pregnancy will affect Hillary Clinton, who is considering a race for president in 2016”.

How many newspapers asked that question when Mitt Romney was proudly photographed with his 18 grandchildren, or when George W. Bush and John McCain showed theirs off for the press?

So should Hillary, unlike her male peers, have set aside political ambitions to help her daughter care for her grandchild?

2. Attaching them to to powerful men

Another bias is to emphasise the “connections” that women must need to get themselves into politics. Women in power, and those seeking public office, are often portrayed as the inexpert delegates of influential men.

For example, during the second administration of Spanish president Rodríguez Zapatero, 32-year-old Bibiana Aído was named Minister of Equality and Innovation, the youngest person to ever hold that position. To announce the news, the prominent daily El Pais ran this condescending headline: “Dad, they’re going to make me minister!” Below, the deck clarified, that Aído “comes with guarantees of Rubalcaba y Felipe González” (two powerful, male government officials).

3. Saying they get ‘emotional’

The media frequently questions the stability of female politicians, based on the stereotype that women are creatures of emotion.

In May 2008, The New Republic’s cover showed Hillary Clinton, arms raised in exclamation, with the headline: “The Voices in Her Head”.

Perfil, an Argentinean political analysis magazine, dedicated a 2014 issue to the conflicts and judgement errors hounding then-president Cristina Fernández. The title: “Cristina’s emotional default”. The argument: that Fernández was suffering from a mood disorder.

Everyone knows that the media judges women’s physical appearance, granting obsessive attention to their clothing, makeup, and hairstyles.

In 2008, Angela Merkel’s cleavage at an Oslo opera house gala caused an international stir, with the Daily Mail, among others, publishing an image of the German chancellor with this headline: “Merkel’s weapons of mass distraction”.

Rome recently elected its new mayor, a corruption-figthing lawyer and city counsellor. But it was her looks that dominated the news: “Meet the beautiful girl who wants to be Rome’s mayor and ”Virginia Raggi, the new and beautiful mayor of Rome“.

Hillary Clinton once sarcastically commented that if she wants to get on the front page, all she has to do is change her hair.

5. Commenting on their voices

I’ll close with yet another Clinton example (since she experienced every manner of gender bias during her two presidential bids): women are bad public speakers.

An MSNBC cable news anchor once interrupted a Clinton speech to complain about her voice, telling his co-host “one of the trickier things to teach people about public speaking is that the microphone works, you don’t have to actually yell”. Fox News’ Geraldo Riviera wondered if she had a hearing problem. Sean Hannity said he found Clinton’s voice “angry, bitter, screaming”.

Two studies by Name It, Change It show that when papers comment on the physical appearance of women and/or use sexist rhetoric, they negatively impact how many voters view women in numerous ways.

Female candidates may be perceived as less likeable, empathetic, trustworthy, effective, qualified. Candidates’ favourability ratings drop; people become less inclined to vote for them. Interestingly, we see these after-effects even when the sexist language in question is part of an otherwise positive or neutral story. And once in power, sexist coverage can undermine women’s ability to govern.

How can we do better? I believe that to avoid depoliticising and diminishing female leadership, journalists – and journalism students, the future of the news – must learn to question the habitual coverage style of women in politics.

In November 2016, with support from the Netherlands Institute for Multiparty Democracy (NIMD), I undertook a two-day workshop in El Salvador with 32 journalists. The aim was to reflect on the importance of equal-minded media political coverage that does not play on gender stereotypes.

We concluded with the participants formulating recommendations, which you can find here (NIMD also sent them to newspapers and universities throughout El Salvador).

The humour in this exercise was demonstrated at the 2016 Rio Olympics, when reporters asked male athletes questions typically lobbed at female competitors, from “If you could date anyone in the world, who would you date?” and “Removing your body hair gives you an edge in the pool, how about your love life?” to “Get ready to see some biceps, tiny tanks and more”.

Second, don’t focus on the private lives of women seeking public office. This tactic includes questioning whether women can be both moms and politicians (see the 2012 Illinois attorney general’s race of Lisa Madigan) and inappropriate intimate lines of inquiry (see the debate between two female New York State senatorial candidates, when the moderator asked if they’d read Fifty Shades of Grey.

Finally, to really fix this often glaring (but sometimes invisible) media bias, more journalists around the globe must be trained to recognise and eschew harmful gender stereotypes.