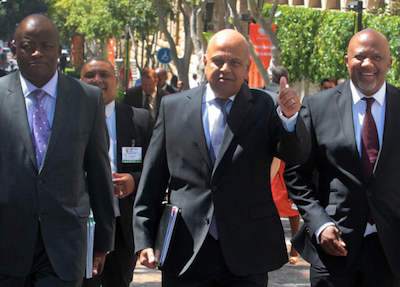 Government budgets across the world are often delivered with some fanfare. South Africa is no exception. In February every year South Africa’s minister of finance presents his Budget Speech to Parliament amid national excitement.

As the biggest event in Parliament besides the State of the Nation Address by the president, the budget speech sparks robust and emotional debates.

Although attention is focused on the speech, there’s a great deal about the budget process that isn’t well known. For example, it is incorrect to say that the Minister “announces” the final budget. Budget proposals only have legal standing once Parliament has followed a particular process to approve them.

What this means is that important components of the budget are still being processed months after the minister gives his speech. While it’s true that tax changes announced by the minister come into effect immediately, they can in fact be reversed months later.

The reason for this process is that it gives the public and its political representatives final oversight of budget decisions. This is appropriate given that the budget has profound implications for the lives of ordinary citizens and can have a major impact on economic activity. For example, raising revenue through taxes and allocating a large proportion to social spending can significantly reduce inequality.

Ultimately a budget reflects the social and economic responsibilities, and priorities, of government, balanced against the responsibility to ensure public finances are sustainably managed.

The country’s constitution requires that there be a process for Parliament to amend “money bills”. These are proposed pieces of legislation that would either change the way revenue is raised, or the way in which government funds are allocated for expenditure. Most revenue raised through taxes goes into the national revenue fund. An allocation of these funds is called an “appropriation” because, to be spent, the money has to be appropriated from the fund.

The Money Bills Act that outlines this process is oriented around four main components of the budget that must be approved. These are:

Beyond the speech, many professionals, analysts, journalists and politicians, interact with the Budget Review. It contains a lot of useful and interesting information, which is one reason South Africa scores highly in international budget transparency measures. But besides a table showing the proposed fiscal framework, and a section describing revenue proposals, it is mostly of no legal significance. The critical documents are the actual pieces of legislation.

What Parliament must approve

Within 16 days after the minister has delivered his speech the finance committees of the two houses have to hold meetings and public hearings. Each committee must also submit a report to the relevant house indicating whether they approve the fiscal framework and revenue proposals, or propose amendments.

There are a few oddities. For example, the actual bills that contain the tax proposals are often only given final consideration six months later in the year. So, in theory, a tax change could be announced in the budget, be given initial approval by Parliament and then six months after it has already been implemented be amended or rejected.

Although it confers significant powers on Parliament, the Money Bills Act also imposes strict constraints. The rationale is that it obliges members of parliament to first agree on a sustainable level of national government borrowing (debt) before entertaining demands or requests from various spheres of government, or national departments, for more funds. Some view this as a “fiscally conservative” approach, although it’s possible to get around the constraints if there is a genuine desire or need to do so.

The turnaround time for the fiscal framework decision is only 16 days. The time for the Division of Revenue is also short: only 35 days to get the Bill passed. Bear in mind this requires consulting with all relevant stakeholders, holding public hearings, drafting committee reports and debating the reports in the National Assembly and the National Council of Provinces.

But there’s a full four months to pass the Appropriations Bill, which determines how money is split across national departments and other institutions. The reason for this is that the process requires consideration of all the relevant “votes” (allocation to specific departments or institutions). And any substantial changes to how money is going to be allocated would need to be negotiated across multiple votes.

The South African budget approval process is accompanied by an extensive public consultation process, required by the Constitution and Money Bills Act. While the Minister of Finance asks for public input prior to the budget speech, there is only so much scope for him to accommodate suggestions. Given how technical the budget is, the National Treasury has to focus its drafting efforts on engaging with national, provincial and local government. The parliamentary process therefore ensures that the public get the opportunity to make inputs into the final decisions.

South Africa’s parliament has not yet, to my knowledge, made meaningful amendments to the budget. There are two main reasons: lack of political inclination and lack of technical capacity.

Nevertheless, in a time when there are concerns about interference in the sound management of public finances and a greater appreciation for Parliament’s oversight function, it may be reassuring to know that it has substantial oversight powers in this area.