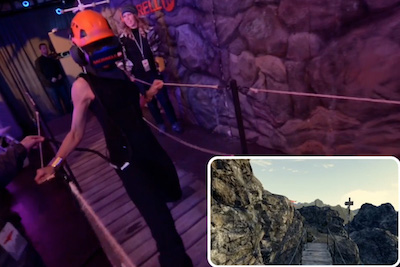 Virtual reality (VR) and augmented reality (AR) are some of the most talked about subjects in tech these days.

This technology will change the way we communicate, learn, create and most of all, how we are entertained. VR breaks down the barrier between the virtual and physical worlds allowing users to step inside the digital world and experience something they never knew was possible. This creates new exhilarating ways for users to engage with brands’ media content, enabling the partaker to not just be a passive consumer, but an active participator.

Virtual reality has finally reached mainstream adoption and consumer acceptance. In the past few months we have seen the launch of Google View, Oculus Rift, HTC Vive, Sony playstation and Samsung Gear.

VR experiences are expanding beyond the gaming community and into everyday life, they can be found on mobile and desktop browsers via the emergence of 360° video, thanks mainly to the vast amount of user generated content of 360° video on YouTube and Facebook.

The market penetration has increased with the emergence of VR apps and games viewed through Google Cardboard, as well as other more advanced headsets.

Swift progress in frame rates, displays, interfaces and more realistic rendering are already in everyone’s developmental pipelines. This is mainly due to the fact that like the smartphone and personal computer, virtual reality isn’t so much a single technology but a combination of many technologies coming together.

The vast improvements in motion tracking, accelerometers and gyroscopes in your smartphone, 3-D recording capabilities, ultra-high-resolution displays and faster graphics chips gives your VR app a sense of motion and position, allowing you to tilt your head and even turn around 360° to give you a sense of full immersion in the virtual space.

Considering that many of us already have a VR-ready device, all that is required is a captivating reason to slide your device into the appropriate VR headset and enjoy an escape into a virtual world where anything is possible.

So how do we tell a captivating story that will enchant the hearts and minds of the average user and build consumer loyalty for your brand?

360° content is anything designed to be viewed by looking all around you – as if inside a giant sphere. Although originally made popular by the rise of virtual-reality, today 360° content can be viewed on any device, through any web browser and across all platforms; with or without a headset. If you use a VR Headset, you can move the image while you’re moving your head. If you’re watching from the laptop or computer, the video can be moved by simply dragging your mouse. You could use 360° videos for branding purposes such as automotive test drives, holiday tours, virtual tours of a property and other types of content that can be viewed via computer, phone or VR headset.

For example, The North Face is offering the chance to join a mountain climber adventure in Nepal.

2. Try before you buy

VR would give online shoppers the opportunity to interact with products in a similar manner as to how they would in a brick and mortar store, simulating the experience in a way traditional online shopping can’t. This would remove some of the difficulties to online purchasing, providing consumers the ability to purchase an expensive item without having to go to an actual store. The technology is already being used in automotive showrooms, have a look at the Audi’s VR Car Showroom Experience with HTC Vive.

Some of the best examples of marketing through VR are brand experiences.

These campaigns are developed by focusing on giving the customer a fun and memorable brand experience, putting the ad message secondary to the experience. Whether you’re taking the customer to view their dream house or allowing them to relax on the tropical beach, your VR experience should be an experience that the customer enjoys. That will bring them back for repeat demonstrations and create a fantastic talking point for their friends. Eventually you will grow comfortable with the VR technology and storytelling that you will come up with even more imaginative ways to use it. Have a look at this Merrel virtual hike example developed by Framestore’s VR Studio, is the first ever commercial in-motion Oculus Rift experience, letting users walk around the virtual reality landscape.

As consumers use VR for gaming and for learning, brands will need to find imaginative ways to create engaging ads. VR advertising is not necessarily appropriate for every aspect of an advertising campaign and would rather be used as a premium enhancement to existing campaigns. VR captures the imagination and is a powerful tool as a sneak preview. This is an opportunity to implement the brand experiences and product interactions mentioned in the above examples.

Since this technology is still in the beginning stages, advertisers have an edge by finding a way to be innovative with VR ads early on. This is an exciting new tech that will be gathering lot of attention and momentum from consumers in the coming months.

The earlier brands can become involved in 360° video and VR the better.

Creating meaningful brand experiences and marketing messages using VR, advertisers can connect with consumers in a new and unprecedented way.

Brendan Sterley is creative director of Mark1 Labs, a division of Mark1 Media.