Accelerating the ‘girl effect’ in Zambia 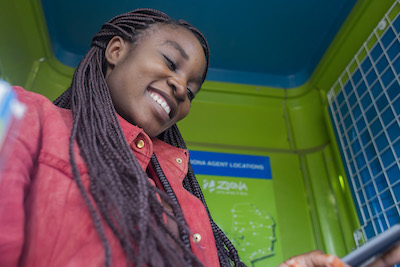 
The hour-long bus ride into the Zambian capital Lusaka is one of bumps and endless stops to pick up and drop off passengers but for the young woman with the long braids who sits in the back seat staring out the window, it’s the perfect time to day dream.

Her name is Annetty Chama and a little more than four months ago she started her first job as a teller at the mobile cash transfer company, Zoona.

Chama, 19, says she uses her trip in the taxi to dream about being successful and running her own business one day.

Chama wasn’t always so optimistic. She had finished school in 2014 but there was no money to further her education. Her only option was to stay at home, helping her grandmother and mother with the cleaning and cooking, caring for her younger siblings and nursing her father and brother, both of them terminally ill.

Then, one morning late in 2016 Chama was called to take a phone call. It was her high school English teacher on the line. She was looking for candidates to take part in a training programme for a money transfer company called Zoona.

“She said someone from the company will call you, you will be interviewed,” Chama recalls. “I couldn’t believe it. I didn’t think it could be true, but the next day I was interviewed and Zoona invited me to the learning centre in Lusaka to be trained for two weeks.”

One month later Chama was working in a Zoona kiosk opposite the bus terminus in Lusaka. In a mere six weeks she had gone from unemployed to earning a thousand Zambian Kwacha a month and being the main bread winner for her family.

The Zoona programme that trained Chama was born out of the ‘Girl Effect Accelerator’, an initiative created by the Nike Foundation and the Unreasonable Group. The Girl Effect Accelerator chose the 10 companies from around the world best positioned to take girls out of poverty and connected them with some of the best minds in Silicon Valley for an intensive 2 week bootcamp in California in the United States.

Zoona, which has revolutionised cash transfers in Zambia by setting up its kiosks for the unbanked in remote parts of the country, was chosen for the Girl Effect Accelerator due to its focus on recruiting potential young women from underprivileged communities, between the ages of 18 and 22, to become part of its teller pipeline.

It then helps tellers to increase and invest their earnings so that they can own their own kiosks, earn more and empower men and women in their communities.

“When we started running a Girl Effect Accelerator project in Zambia, most of the women had never used a computer before,” says Mike Quinn, the chief executive of Zoona.

“But through the project, they were provided with basic computer literacy, specific training on how to transact using the Zoona platform, and other skills needed to become a successful teller. We then match them with agents who need tellers.

“The idea is for Zoona agents to employ these recruits as tellers and mentor them in the business until they are ready to become entrepreneurs themselves.”

The project however, comes at a time when Zambia’s economy is under severe strain and cash is in short supply, which has the potential to dampen Zoona’s growth.

Gross domestic product growth slowed to 2.8 percent in 2015 from 4.9 percent in 2014, according to The World Bank, with slower regional and global growth reducing demand for Zambian copper, its main export. Low rainfall has also reduced agricultural incomes and increased food prices.

At 5pm Chama closes the shutter of her kiosk, locks the door and walks across the road to the bus terminus where she drops off the cash with the owner of her Zoona kiosk.

A little more than an hour later she is home in Marapodi again, side-stepping the puddles on the streets that came after a rain storm earlier that day.

Many young woman from the area stay at home or become prostitutes when they finish school because they don’t know what else to do, Chama says. “The employment rate is very low so young ladies around here engage in prostitution or loiter on the streets,” she says.

“You need money at the end of the day. To get a job is difficult. You need connections.”

Chama will sleep on a sofa in her grandmother’s two bedroom house and be up at 5am to start again, but the routine doesn’t bother her. She says she is proud that she is the reason her 12-year-old brother can go to school. She’s also had a solar panel electricity box installed in her mother’s house using her savings. There is a small amount still to pay and then they will finally have electricity.

She has accomplished this in the four months that she’s been working with Zoona.

“The chores always take so long when you have no money,” she says as she arrives home and collects a container that she will fill with water at the communal tap.

“But when you can dream about the future, nothing takes long.”