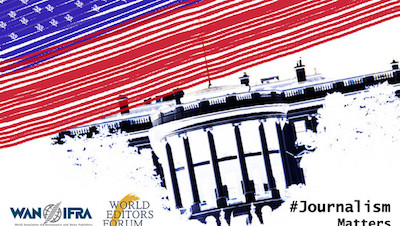 Huffington Post South Africa editor in chief Verashni Pillay, Sunday Times editor Bongani Siqoko and Lisa MacLeod, head of digital at the Times Media Group, joined international media leaders in signing a letter to Trump in which they expressed “concern” at comments directed at media, particularly his accusations of “fake news”. They drew particular attention to the president’s tweet, “The FAKE NEWS media (failing @nytimes, @NBCNews, @ABC, @CBS, @CNN) is not my enemy, it is the enemy of the American People!”

The editors and CEOs said it was “deeply unhelpful … to see the President of the United States of America fuelling antagonism towards news outlets by labelling them – misleadingly – as ‘fake news’. In reality, the organisations cited by you in this particular tweet adhere to the highest professional and ethical standards, and it is disingenuous to suggest they contribute to the current ‘fake news’ epidemic”.

This, they said, combined with the exclusion of certain news outlets from White House press briefings, was “jeopardising the on-going ability of a free press to hold power to account in the United States”.

Over 40 editors, publishers and CEOs signed the letter requesting that Trump build a better relationship with the media. It was sent to the Trump administration on behalf of the Executive Committee, World Editors Forum and Media Freedom boards of the Paris-based World Association of Newspapers and News Publishers (WAN-IFRA), and highlighted the damage the president’s comments – regularly made using the social media platform Twitter – are having on an industry attempting to respond to the phenomenon of disinformation and ‘fake news’.

The effects of deliberate attempts to spread disinformation have been seen to influence election processes, alter policy, and surface unprecedented hatreds and growing resentment between peoples…

“At a time when journalists and news media are being increasingly targeted for violent reprisal (and, in too many cases, often deadly retribution as a result of the work they do), the tone of your comment is highly inflammatory,” said the letter. “In a deeply divided America, a country facing many challenges on numerous fronts, the need for a vocal and critical press to act as the watchdog over essential freedoms on behalf of society seems more urgent than ever.”

And, they added, “The effects of deliberate attempts to spread disinformation have been seen to influence election processes, alter policy, and surface unprecedented hatreds and growing resentment between peoples; all of which contribute to the division of communities. The causes, as well as the appropriate responses required to counter disinformation are being analysed by newsrooms globally, particularly in terms of what this means for professional media and the practice of journalism.”

The letter concluded, “We firmly believe, Mr President, in the importance and value that a vociferous, critical press brings to democratic society; we would very much welcome the opportunity to convince you likewise.”