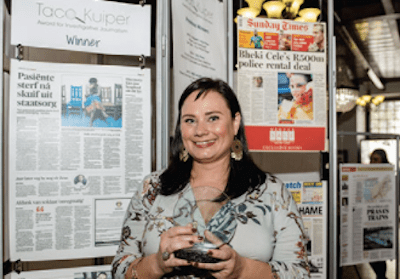 Suzanne Venter of Rapport won the 2017 Taco Kuiper Award for Investigative Journalism for her reporting on the Life Esidimeni tragedy. Michael Bratt attended the event – held to celebrate excellence in investigative journalism – at Wits University.

Introducing the awards, the acting convener of judges for 2017, Justice Malala, said, “We gather today to pay tribute to journalists who spend their time digging and probing to expose wrongdoing. Their work has never been more important. In the age of alternative facts we need probing, fact checked, fearless journalism of this nature.”

Not just for the newspapers anymore

Some major positives were seen at this year’s awards including an increase to 45 entries, from 43 last year, as well as the inclusion of more online, television, radio, and magazine submissions.

“In the past the overwhelming majority of entries was from newspapers. This year just under half was from this media,” Malala commented. The 2017 awards saw 20 entries from print publications, two from radio, nine from online publications, 13 from television, and one from a magazine. Entries were received from major and minor outlets. The submissions went through two judging panels, the first consisting of Sarah Carter of CBS’ 60 Minutes, Franz Kruger, director of the Wits Radio Academy, and Wits Journalism lecturer, Lizeka Mda. The second panel comprised Adjunct Professor in the Wits Journalism department, Mathatha Tsedu, former Supreme Court of Appeal judge Tom Cloete, Carter and political commentator, Justice Malala.

An outstanding example of investigative journalism

The keynote speaker at the awards event was Ben Bradlee Jr, who was assistant managing editor of investigations for the Boston Globe when its team investigated and uncovered the abuse of young boys by Catholic priests. The Oscar-winning film, Spotlight, told the story of the investigation.

Bradlee provided some insights into the effect the internet is having on newspapers. “Virtually all newspapers in America are losing money now, because people have grown up used to getting their news for free. When confronted with a paywall many of them refuse to pay for it… over the long term what business can survive by giving away its product? It just doesn’t make sense.”

He added, “In America we have lost 50% of all newspaper reporters since 2003. In that environment newspapers and other news organisations are struggling just to have enough reporters to put out the paper each day. When that’s the case… too many editors are perceiving investigative reporting as a luxury, which they can no longer afford. But I would argue that it’s essential and they just have to find a way… You need rigorous, tough reporting to hold truth to power. Who’s going to watch the government if the press doesn’t do it?”

The two judging panels narrowed down the 45 entries to the top 10. These were:

The runners-up were the Sunday Times trio for their State of Capture investigative piece. They walked away with a cash prize of R100 000.

“When Suzanne Venter first confronted former Gauteng health MEC Qedani Mahlangu with this story, she was told that ‘all this is just hearsay’ and was kicked out of the MEC’s office. Venter stayed with the story for months, brought us the human side of it while exposing the corruption and insensitivity of our political leaders as they refused to accept what was happening,” said Malala.

Speaking to The Media Online after winning, Venter said her story began with a tipoff through Facebook, from a concerned mother whose child was being moved out of the Cullinan Care Centre to a government NGO, where he was receiving very bad treatment and moved around to make room for the incoming Life Esidimeni patients. Venter went on to visit the NGO where she was initially refused access, but managed to find a way in to document what was taking place. The story built from there.

“In my case, it’s all about not giving up,” Venter explained. “And putting in extra hours, which I did, even on my leave days. You shouldn’t miss detail. You must check out everything. Speak to absolutely everyone involved as then you find out new people and new information”. When asked what was next for her, Venter said, “I think I will just continue what I am doing. I think that each and every journalist’s work, whether it’s one article or a series, is investigative journalism. If you want to do proper journalism then you investigate”.

The Media Online also spoke to Thanduxolo Jika, part of the runner-up team from the Sunday Times. “The most important thing for me is you have to be sure and factual with what you’ve got. Don’t rush to publish a story just because you’ve got it; you must establish facts,” he advised. He added that for him and his colleagues at the Sunday Times there were still a lot of stories to uncover, particularly around the upcoming ANC policy and elective conferences.

Here is a photo gallery of the event.