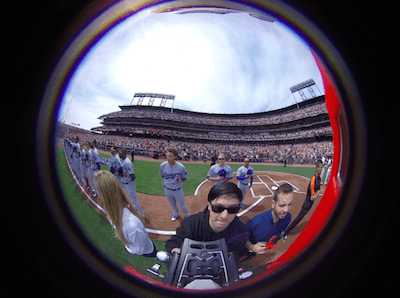 Gaming, sports, travel and entertainment are just a few industries exploring the possibilities of VR. Today several media giants are also experimenting at large scale. But will we all soon walk around with bulky headsets? And will we be able to cope with the intense experience of VR? asks Katarina Andersson, Schibsted’s Silicon Valley correspondent.

First BuzzFeed’s Ben Kreimer and his 360-video-camera-helmet went skydiving. Then they hit the floor of the Republican National Convention. The week after, the VR journalist was balancing on the roof of the Democratic National Convention, offering a virtual reality walk to anyone with a set of VR glasses.

And on top of all that, he produced a well-received 360 piece from the the locker room of San Francisco’s basketball team, the Giants – that story got around six million views.

“Girls loved looking at the basketball players’ butts, we got a lot of comments about that,” says Kreimer, smiling. Kreimer never paid any attention to the athletic butts of the team as he was filming the piece. “That’s the fun thing about this kind of content,” he says. “The audience will get something out of it that you never expected.” 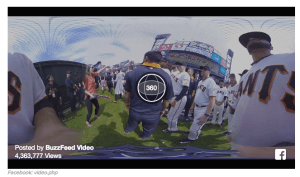 2016 was big for virtual reality. Tech giants have been investing huge amounts of money in VR devices, turning out one VR headset after another, each one fancier than the one before. As 2016 took off, the vision of Silicon Valley was loud and clear: Soon all of us will be strutting around with big, bulky headsets taped to our faces, living our virtual reality lives full on.

But these expectations might have been a bit too lofty. Analysts have been fiercely debating just how quickly consumers will get into virtual reality, but there has been precious little data to inform the argument.

The major players involved, including HTC, Facebook’s Oculus and Samsung, haven´t revealed official sales numbers of their VR headsets, prompting some analysts to take a pessimistic view. For sure, a big group of gamers love the new technology – but what about consumers whose primary interest is news?

“Some argue that virtual reality is going to be a big thing for news organisations. I don’t agree,” says Joshua Benton, director of the Nieman Lab. The main argument for his bashing of VR in journalism is based on the way people interact with the news.

News consumption is very “lean back,” while interacting with VR takes effort, Benton asserts. “People consume news mainly to inform themselves,” he explains. “News should be quick to understand, easy to scan and simple to share. Today’s VR news meets none of these requirements.”

Journalism technologist Kraimer agrees. “Of course the hurdle is enormous,” he says. “Having to put something on your face instead of just pulling the BuzzFeed-app up on your phone is huge.”

He believes that the 360-content BuzzFeed is producing is mostly watched without VR headsets, and it’s designed to work this way. But things might change. As VR content across the board – in gaming, sports, travel, entertainment – will grow in volume, and as VR headsets become smaller, cheaper and easier to use.

“When you can use your VR headset for many different things, you’ll probably find it worth while to put it on for a couple of hours every night.” he says. “Maybe you are gaming for a while, then you switch over to watch the news or a movie in VR.”

Most big brands in news are experimenting with virtual reality journalism today, including The New York Times, The Guardian, The Economist, The Wall Street Journal and CNN. Some of them even have their own VR news app.

The discussion about the impact of VR experiences has been lively. During the game developer conference GDC in San Francisco this past March, Shuhei Yoshida, Playstation’s head of VR, warned about gaming and VR, even saying that virtual reality could be ”addictive.” He called for the gaming industry to be responsible as new games are developed.

“Some experiences are very intense.” he says. “I’m expecting some people to feel traumatised. There is an enormous power in this new medium.” News editors will have yet another parameter to consider with this new medium.

With 360 video cameras reporters can bring viewers into intense breaking news situations such as demonstrations, war zones and natural disasters. Which stories will be too much to cope with in virtual reality? And if a news organisation decides to publish potentially controversial content, will it come with a warning?

“Let´s try things out,” says BuzzFeed’s Kreimer. “Even if virtual reality journalism is not exploding in terms of hits right now, it pays to be a part of it. VR news is going…well, somewhere.”

The Schibsted Future Report can be downloaded for free by clicking here.

This post was published by the World Association of Newspapers and News Publishers, WAN-IFRA, and republished here with permission. It was sourced from Schibsted’s Future Report (pages 40 and 41).
Related Articles: