LATEST NEWS
Home Digital Explainer: How the internet knows if you’re happy or sad, and how advertisers use info

Explainer: How the internet knows if you’re happy or sad, and how advertisers use info

Posted By: Lewis Mitchellon: May 24, 2017In: Digital
Print Email 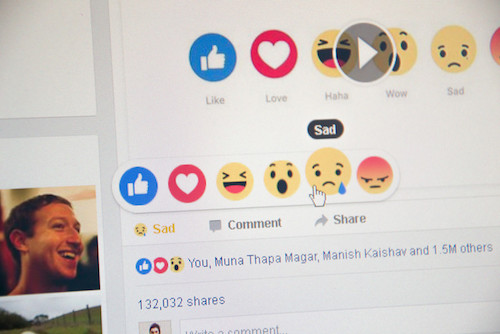 Think about what you shared with your friends on Facebook today. Was it feelings of “stress” or “failure”, or perhaps “joy”, “love” or “excitement”? Each time we post on social media, we leave traces of our mood.

Our emotions are valuable commodities, and many companies are developing automated tools to recognise them in a process known as sentiment analysis.

Recently, a leaked report revealed that Facebook can identify when young people are feeling vulnerable, although the company has insisted it did not use the analysis to target users with advertising. Facebook also apologised in 2014 for an experiment on “emotional contagion” in which posts with either “positive” or “negative” sentiment were filtered from users’ feeds.

Clearly, the ability to detect emotion from text is of great interest to social media companies, as well as advertisers. But how does sentiment analysis work, why is it useful and what are the dangers?

How does sentiment analysis work?

While the details of Facebook’s own algorithm are not publicly known, most sentiment analysis techniques fall into two categories: supervised or unsupervised.

Supervised methods rely on labelled data. In other words, these are posts that have been classified manually as containing positive or negative sentiment.

Statistical methods are then used to train models to classify new posts automatically based on the presence of pre-identified words or phrases, for example “stressed” or “relaxed”.

Unsupervised methods, on the other hand, often rely on building a dictionary of scores for different words. One such dictionary developed by my collaborators asked people to give a 1 to 9 happiness score to different words, and then averaged the results: “rainbows”, for example, scored 8.06, while “useless” gets 2.52.

The overall sentiment of a phrase can then be scored by looking at all the words in the post. For example, the average score for the post “My momma always said ‘life is like a box of chocolates’” is an above-average 6.02 according to this dictionary, suggesting it expresses a positive feeling.

What is sentiment analysis used for?

Imagine a new mobile phone is released; a sentiment analysis of social media posts about the phone may give a company valuable, real-time insight into how it’s performing.

There are broader applications of sentiment analysis. Researchers have recently tracked Donald Trump’s Twitter sentiment over the first 100 days of his presidency and built bots to place market trades when he tweets positively or negatively about specific companies.

Scientists can track emotional trends in other texts as well. For example, we used sentiment analysis to study the emotional arcs of more than 1,000 films through their screenplays. The arc of the 2013 Disney film Frozen is shown below.

Many films show similar patterns: regular peaks and troughs of tension and release, followed by a particularly big trough 80% of the way through the film (all hope is lost!), before the final resolution and happy ending. Applying a similar analysis to novels, we showed that most stories follow one of six basic story arcs.

We’re still not that good at sentiment analysis

Given that sentiment analysis often relies on mining social media posts, it raises major ethical concerns, and this debate is only beginnning. Yet the complex nature of language and meaning makes it prone to error.

Take the phrase, “May the force be with you”, which scores 5.35 using our dictionary’s analysis. For any Star Wars fan, it is of course a hugely positive phrase, but it scored modestly in our test because the word “force” is rated a below-average 4.0.

This is understandable when rating this word in isolation, but in context it makes less sense.

Some scepticism of the validity of Facebook’s sentiment analysis capabilities is therefore warranted. It’s entirely conceivable that describing something as “fully sick” on Facebook, a phrase of colloquial endorsement, could lead to an individual’s emotional state being misclassified.

To understand when sentiment analysis does and doesn’t work, it is important to examine the words that drive particular results.

To do this, we use “word shift” diagrams, like the one below for Frozen. This shows which words made the climax of the screenplay sadder than its happy ending: more references to “sadness” and “fear”, but strangely, more “beautiful”.

Promise and a warning

Sentiment analysis is a powerful tool, but it’s only a young science and must be used with caution.

Scientists must develop tools that allow us to peer “under the hood” and understand why certain algorithms produce the results they do. This is the only way to diagnose issues with different methods, and more importantly, to educate the public about the field’s possibilities and limitations.

Sentiment analysis research has largely been built on large, public data sets, particularly from social media. It’s important those of us unwittingly providing the data understand what it can and can’t be used for, and how.

Michelle Edwards contributed to this article.

With the right algorithm, scientists can detect how you feel through your Facebook posts.
Bakhur Nick/Shutterstock