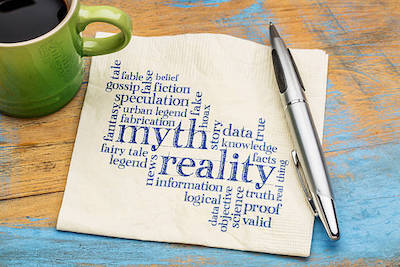 Fake news is a term on everybody’s lips, thanks to President Donald Trump. But it has also opened a window of hope for the media’s free-falling revenues. Many pundits believe that people may be more likely to pay for credible journalism they can trust and investment in quality, credible content will be money well spent.

‘Caster Semenya dies in the US’, screamed a recent headline above a report about the tragic death of the Olympic champion and record-breaking South African athlete.

Another equally bleak story a few days later reported the death of Oscar-winning movie star Charlize Theron – and like the Semenya story, it was widely commented on and shared via social media.

But there’s just one problem: They weren’t true, just like all the other stories on the site, and no credible media reported them.

Welcome to the world of ‘fake news’, a term that is on everyone’s lips thanks to Donald Trump, president of the United States, as well as claims that Russian interference helped sway the outcome of both the 2016 US presidential elections and the Brexit vote in favour of the UK quitting the European Union.

News360 is just one of the many fake news websites that have mushroomed in South Africa since last year, with many making their debut in the run-up to the 2016 municipal elections.

They specialise in made up and hoax stories, including one just before the election claiming police had arrested two men in possession of 80 000 ballot papers marked in favour of the ANC. It spread like wildfire on social media, even after newspapers debunked the story as fake.

For many of these websites the motive is purely financial, as was the case with the Semenya and Theron reports. They use sensational headlines and photos on social media as clickbait to drive traffic to the website, which then charges advertisers according to the number of visitors.

Stories such as these are a lucrative revenue stream for unscrupulous people who depend on the gullible to help spread their dubious content far and wide. They also often masquerade as ‘satire’ and some mimic genuine sites with slightly altered names.

But with a human tendency to exaggerate and spin tall tales, false stories and hoaxes – often for financial gain – are nothing new. Before the advent of social media many of these types of hoaxes and false stories were widely spread by email.

And a much earlier iteration of fake news, dubbed ‘yellow journalism’ when it became popular in the 1890s, was used to describe a genre of journalism in which some US papers used wildly sensational headlines above fabricated stories to attract readers.

And then there are the modern day tabloids, which often add a dose of ‘topspin’ to spice up their stories – or sometimes they just make it up. Like the UK Sun’s infamous, made up 1986 ‘FREDDIE STARR ATE MY HAMSTER’ headline and story. 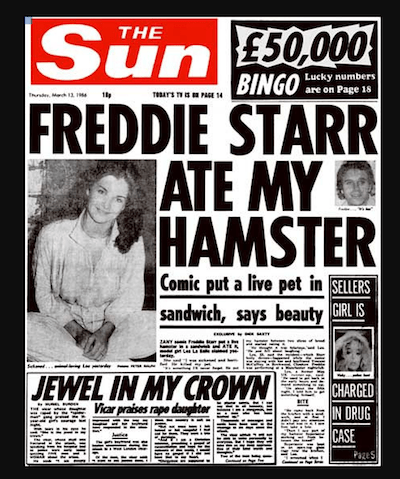 “Arguably, fake news is premised on deception and is little more than propaganda,” wrote media academic Ylva Rodny-Gumede in a recent column.

“Hoax news, propaganda and misinformation have been around for as long as people have communicated. This has been evident through the coverage of wars dating back to media reports on the outbreak of the Crimean War in 1853, as well as the two World Wars,” she says.

“Phillip Knightley in his widely cited book: The First Casualty: The War Correspondent as Hero and Myth-Maker from the Crimea to Iraq, shows how governments have used the media for their own propaganda purposes ever since the Vietnam War which ended in 1975.”

So, clearly, fake news is not new. But what makes it different in the 21st Century is the ease with which it can be spread via the internet and social media.

One of the most infamous examples of political ‘fake news’ in the old South Africa was after former President PW Botha suffered a stroke and was rushed to hospital. But when journalists, tipped off about what had happened, tried to get confirmation they were told by presidential spin doctor Jack Viviers: “No, man, there’s nothing wrong with the state president. From where I am in my office, I can see the president sitting at his desk, working.”

More recently an attempt by the ANC to set up a ‘war room’ to ensure that the ANC emerged victorious in last year’s local government elections ended in failure and litigation.

A dominant form of fake news in South Africa is centred on the battles being waged by websites whose ownership is hidden and use armies of bots – simple computer programmes that perform highly repetitive operations – to fight political battles by proxy. 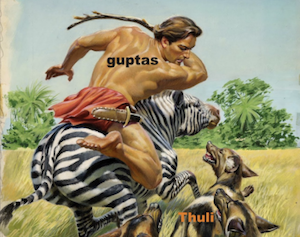 “One is users attempting to amplify their message by having networks of fake accounts, or ‘bots’ retweet their content. Another is the creation of fake accounts specifically to attack public figures such as what we’ve seen around prominent journalists and business people,” says Findlay.

“For example, fake sites like City Sun (a portmanteau of City Press and Daily Sun), are pro-ANC at the expense of the DA and EFF, and facts do not get in the way of their sensational and partisan stories.”

But he says it is difficult to quantify the impact of these kinds of sites. “Those that do have Facebook and Twitter presences tend to have relatively few followers. But research has shown that much fake news spreads via informal channels such as email and, I would assume in South Africa, via WhatsApp.”

His impression is that this kind of content does not resonate widely, Findlay says. “However, I wouldn’t be surprised to find it resonating within a specific group whose beliefs align with those of the fake news authors. They are preaching to the choir as it were, rather than winning new hearts and minds.”

But, he adds: “What is most concerning to me is that all of the fake news and social media activity that I have come across has had the same agenda behind it: attacking President Zuma’s enemies …  and bolstering perceptions of his allies.

“While the content mostly preaches to the choir, it does appear to have been quite effective in laying the groundwork for an alternative narrative to that of state capture by the Gupta family; a narrative in which the attention has been shifted to capture of the country by ‘white monopoly capital’, with a focus on financial institutions and banks. The narrative also has a deeply entrenched racial angle, pitting black against white.”

But it’s not all bad news and there are some positive spin-offs from the surge in fake news.
One is the worldwide proliferation of fact-checking organisations, like the South Africa-based AfricaCheck. Besides debunking fake stories many of these organisations also have programmes to educate the public on how to spot fake news. 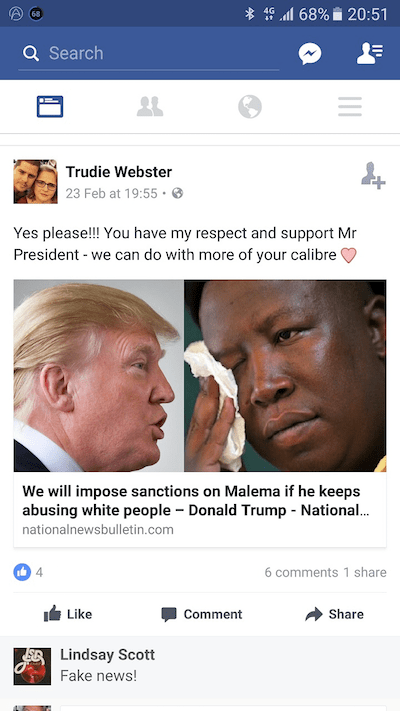 It has also opened a window of hope for the media’s free-falling revenues, with fewer people paying for the news they consume. Many pundits believe that people may be more likely to pay for credible journalism they can trust and investment in quality, credible content will be money well spent.

Says Herman Wasserman, Professor of Media Studies at the University of Cape Town: “Investigative, credible, trustworthy journalism is now more important than ever.” Equally important, he says, is a need to educate ordinary people about fake news and how to spot it.

“Media literacy is vital in an environment where the public are co-producers and co-disseminators of news and information. People need to know how to recognise fake news, how to read critically and when not to click or share. In the latter role especially I see a renewed importance for media educators.”

But ultimately it is up to ordinary users to help stem the flow of fake news by thinking twice before sharing – and not doing so if they are not sure what they see is true.