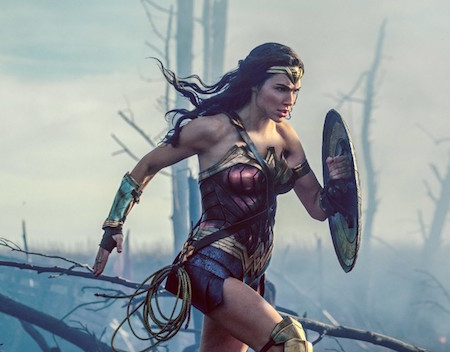 “Wonder Woman! All the world’s waiting for you,” rang the theme song to the classic 1970s television show as one-time Miss World America, Lynda Carter, transformed into the star-spangled superhero. Yet while gun-toting raccoons headline today’s superhero movies, the world has waited a long time for its most famous female superhero to receive a dedicated film.

Female superheroes have been confined to sidekick roles (Black Widow is the highest profile Avenger without her own movie) or relegated to TV (where Jessica Jones and Supergirl kick ass on a weekly basis). Gal Gadot as Wonder Woman is the first major female-led superhero movie – and as a hero, her antecedents reach back to the suffragettes.

As historian Jill Lepore details in The Secret History of Wonder Woman, the formative years of Wonder Woman’s creator, psychologist William Moulton Marston, took place against the backdrop of the suffragette movement. As a freshman, he had heard Emmeline Pankhurst speak when she visited Harvard in 1911.

An advocate for women’s rights, Marston would later describe the “blood-curdling masculinity” of comic books as their “worst offence”. His remedy? To create a “feminine character with all the strength of Superman plus all the allure of a good and beautiful woman”. So in October 1941, All Star Comics introduced Wonder Woman, “to whom the problems and feats of men are mere child’s play”.

Marston was married to attorney Elizabeth Holloway Marston, who served as the family’s breadwinner. Later he began a relationship with his research assistant Olive Byrne, who became his life-long partner living with Marston and his wife. Byrne was the daughter of radical feminist Ethel Byrne who, with her sister Margaret Sanger, opened the first birth control clinic in the US (forerunner of today’s Planned Parenthood). It is said that Byrne wore bracelets that inspired Wonder Woman’s bullet-deflecting jewellery. The comic was filled with such feminist iconography, but, as Lepore notes, this was often “feminism as fetish”. Marston’s interest in bondage frequently saw the hero bound and gagged in suggestive poses.

Across her 75-year history, Wonder Woman has regularly been depicted scantily clad and in anatomy-defying poses offering the optimum number of angles for leering. This is the tension that each version of the character, including the big-budget film, must reconcile: Is Wonder Woman a feminist icon or a pin-up girl masquerading as a satin suffragette?

While one might question the wisdom of entering into battle with little more than a bustier and mini-skirt, director Patty Jenkins’ feature length Wonder Woman adheres more closely to Marston’s feminist celebration than the comic’s kinkier elements.

Although the story is repositioned to the trenches of World War I, the adaptation remains largely faithful to the character’s origins. Gadot plays the Amazonian princess who, after saving the life of US serviceman Steve Trevor, leaves the women-only island paradise of Themyscira to aid the allied effort.

Avoiding the easy option of camp or Marvel’s tongue-in-cheek distance, the film’s first act convincingly realises the matriarchal society of warriors. In particular, Robin Wright gives a muscular performance as the Island’s head badass and Wonder Woman’s unforgiving mentor, General Antiope, who trains the future superhero to protect the world from the eventual return of Ares, God of War.

Once the hero leaves the island, the film falls into superhero movie conventions with Wonder Woman’s powers and principles tested as she attempts to unravel a German plot. In particular, the film shares many parallels with the WWII-set Captain America: The First Avenger with the brightly-coloured hero enlivening grey battlefields with the kind of supercharged élan that would have no doubt pleased her original creator.

Like all genre films, superhero movies are built on sameness and difference, and while Wonder Woman offers little variation on the box-office tested superhero origin story, the presence of a female hero is enough to reinvigorate tired conventions. There is something doubly heroic in watching Wonder Woman lift a tank over her light frame, or crash through armed soldiers to save innocent villagers.

Gadot, a bright spark in the otherwise gruelling Batman V Superman, plays the Amazonian with wide-eyed curiosity, but is careful to avoid ever having the hero appear foolish. Rather, Wonder Woman’s outsider status allows the film to point out the inequities in the patriarchal world, as the hero eschews corsets, barges into men-only meetings, and compares secretarial work to slavery.

While the distance that the film’s WWI setting provides dulls any feminist critique, it will be interesting to see if that same critical lens is applied when Gadot resumes the role of Wonder Woman later this year in the modern day Justice League film. For her part, Patty Jenkins’ direction makes no obvious concessions to the hero’s gender nor does she exploit it, with each action sequence filmed much the same as if the Man of Steel was at its centre.

Aided by Jenkins’ assured approach, Gadot manages to navigate the inherent tensions of the character by creating a Wonder Woman who is unapologetically glamorous, but also capable and caring.

As the first man Wonder Woman ever meets, Steve Trevor (Chris Pine) successfully channels Steve McQueen circa The Great Escape. The charismatic Pine enjoys a playful chemistry with Gadot during the second act culture clash and some genuinely tender moments as the film reaches its CGI-laden conclusion.

While some may see the film’s moments of girl power as a facile gesture on the part of the filmmakers to appease “social justice warriors” rather than a meaningful attempt to redress imbalances of superheroes on screen, the result is still the most successful entry in the otherwise moribund DC shared universe. (Though to describe the film as the best DC or female-led superhero film is to damn Wonder Woman with faint praise.)

Although it could not hope to shoulder the full weight of 75 years of expectations, no qualifiers are necessary: Wonder Woman is an exciting entry in the superhero movie genre.

Wonder Woman, the world’s no longer waiting for you.