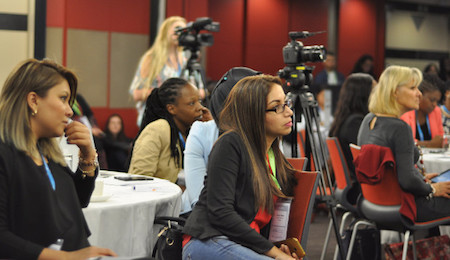 The tragic death of journalist Suna Venter has done more than bring media freedom into the spotlight. Venter’s death, reportedly of a heart condition exacerbated by stress, and brought on by the continuous intimidation, harassment and assaults she experienced for the role she played in exposing corruption and fighting for editorial independence.

The proliferation of fake news, threats to media freedom and the harassment of journalists – both physically and online – were recurrent themes at the recent WAN-IFRA World News Media Conference. It was also brought into sharp focus at the inaugural Women in News summit, which celebrated female leaders in the industry and discussed the challenges women still face in media today.

The panel discussion revealed that while women have been making great strides in media, it’s largely despite the challenges they face.

“It was a great panel, with women from across the world with different experiences and achievements – women who were ready to talk about their battles and successes,” says Mahlatse Gallens, chairperson of South African National Editors’ Forum (Sanef), who opened up to her experiences of racism and sexism in the newsroom. “It was good to have women at different echelons of success. Talking about it allowed others to engage and offer solutions. Everyone had a story to tell and it was quite a relief to learn one is not alone in the challenges.”

Gallens admits that while the accounts of sexual harassment, struggles to maintain a work/life balance and the misconceptions that surround successful women were hardly new – but needed to be heard by those who could a great deal more to effect transformation.

“It was disappointing that men were not in the room. There was confusion on whether they were allowed or not. It is important that we make women’s challenges mainstream issues and engage the men who still wield power in the industry. It would also be good to introduce talks with institutions that have introduced best gender equality practices so that we can empower other companies,” she says.

Social media: Yet another platform for harassment

“It emerged during the inaugural WIN summit, which was packed to capacity with standing room only for many participants, that women in particular are targeted, often via threats of a sexually aggressive and deeply personal nature. I was particularly struck by the proliferation of online harassment and cyber bullying that journalists are experiencing across the globe. Women from different parts of the globe gave chilling accounts of their personal experiences.

“Huffington Post SA editor-at-large Ferial Haffajee described her discovery of the ‘dark heart of Twitter’ and Philippines editor Maria Ressa said that she had become so accustomed to being targeted in the digital space that death threats were normal,” explains Heard.

The accounts of the numerous attacks on Venter over the past year – including being shot in the face with a pellet gun and abducted – show that the effects of these threats can be fatal.

Heard is adamant that newsrooms not only “lack the tools and experience to deal with the issue” but that the entire industry needs to take a bolder approach. “The take home message for me, when it comes to fake news and cyberbullies, was that the industry need to be bolder, it needs to stand together, to name and shame, to investigate the source. We need to fight back with a multipronged strategy (SANEF announced a campaign around this at the conference). We also need to find ways to support journalists in newsrooms, especially young reporters who may not be sharing their experiences – or their reactions – with news managers.”

Clearly, discussions around gender issues, media freedom and harassment are important – and summits like WIN are vital platforms for steering action and transformation.

And ultimately, to avoid the tragic and untimely loss of strong, powerful female voices like Venter’s.